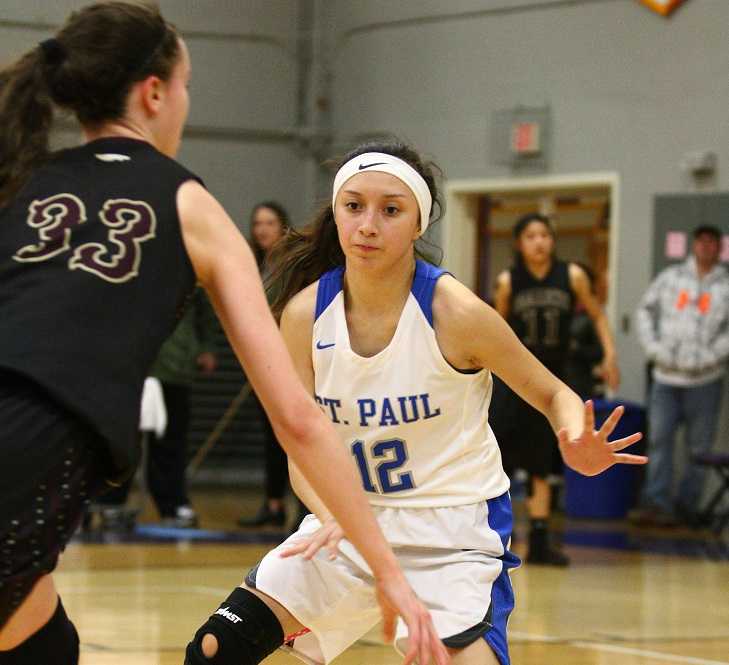 BAKER CITY – St. Paul moved one step away from completing a perfect season with a 55-33 win over Damascus Christian in the semifinals of the OSAA / OnPoint Community Credit Union 1A girls basketball tournament Friday at Baker High School.

Erin Counts had 17 points and 17 rebounds, Isabelle Wyss had 14 points and 15 rebounds and Diana Hernandez added 13 points for the top-seeded Buckaroos (29-0), who will play No. 2 Powder Valley in the championship game at 9 p.m. Saturday.

After losing in the 2A semifinals last year, St. Paul is in position to win its first title since taking the 1A crown in 2007.

“It’s a wonderful feeling for everybody. It’s been a really, really magical year,” Buckaross coach Dave Matlock said. “We want to get one more step. I hope we play our best game tomorrow because they’re very deserving if they win it.”

“We really, really took care of the boards and ran the break pretty well,” Matlock said. “We found the open girl and we shot the ball well today.”

Counts had three of the team’s four three-pointers. It was a bounce-back game for her after she struggled in the quarterfinals against Joseph.

“She was really looking to shoot the ball,” Matlock said. “She had a little bit of a rough game yesterday. She wasn’t quite herself. But today she was a real force on the boards, a lot of putback stuff.”

Damascus Christian got 12 points and 10 rebounds from Tory Webb and 10 points from Emily Powers.

Powder Valley 46, Perrydale 37: Down by eight points late in the third quarter, the Badgers outscored the Pirates 19-2 the rest of the way to advance to their first final since winning the 2006 title.

The Pirates led 18-6 midway through the second quarter before Powder Valley closed to within 21-19 at half. Perrydale extended the lead to 31-21 in the middle of the third quarter and still led 35-27 late in the period.

But the Badgers went on a 13-0 run – getting three-pointers from Logan Nedrow and Bingham – to lead 40-35 with 3:08 left. They closed out the win with free throws.