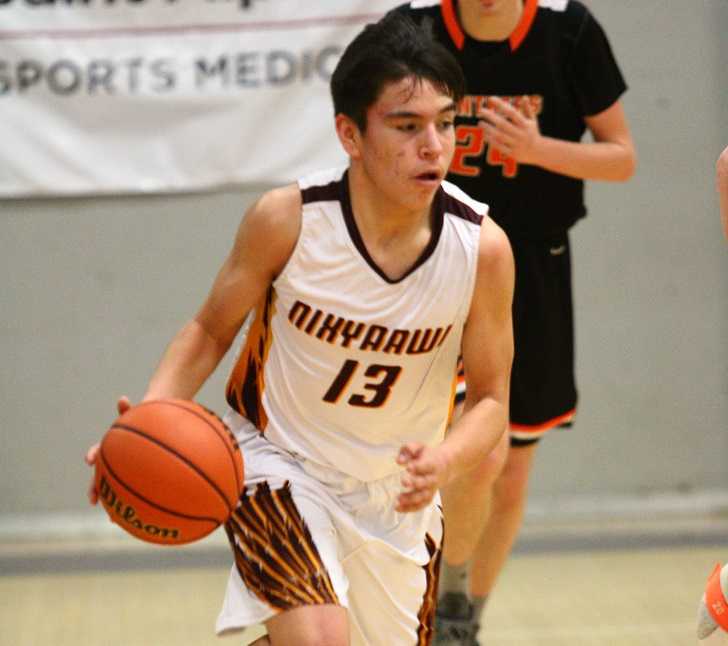 BAKER CITY -- Nixyaawii started fast and never let up in a 71-49 win over Prairie City in the semifinals of the OSAA / OnPoint Community Credit Union 1A boys basketball tournament Friday at Baker High School.

The Golden Eagles (27-2) scored the game’s first 12 points on four three-pointers – two by Quanah Picard and one each by Tyasin Burns and Dazon Sigo – and were never threatened. Seven different Nixyaawii players combined to make 10 three-pointers.

“We had some open looks and we knocked down some threes,” Golden Eagles coach Shane Rivera said. “It’s something that they work on. We fortunate to have that at our disposal.”

No. 5 seed Nixyaawii, which has never won a title, will appear in the final for the second time in four years Saturday when it meets Trinity Lutheran. The Golden Eagles lost in the quarterfinals last year.

The Golden Eagles have won 11 in a row, all by double digits. They rolled past Horizon Christian 66-44 in the quarterfinals.

“We’ve been focusing on our team defense and moving the ball around, sharing the ball, getting the ball to the open guy,” Rivera said. “We finally know our roles, but at the same time we know we have seven kids that can score the basketball, and six of them can shoot it from the outside.”

Trinity Lutheran 53, Days Creek 40: The sixth-seeded Saints of Bend, in their fifth season of existence and playing in their first state tournament, pulled away in the fourth quarter to advance to their first final.

Days Creek trailed throughout but was within 40-37 with 4:42 left after two free throws by Rocco Muir. But Trinity Lutheran’s Scooty Gilbert and Matt Eidler scored baskets to spark a 9-0 run that opened a 49-37 lead with 1:09 remaining.