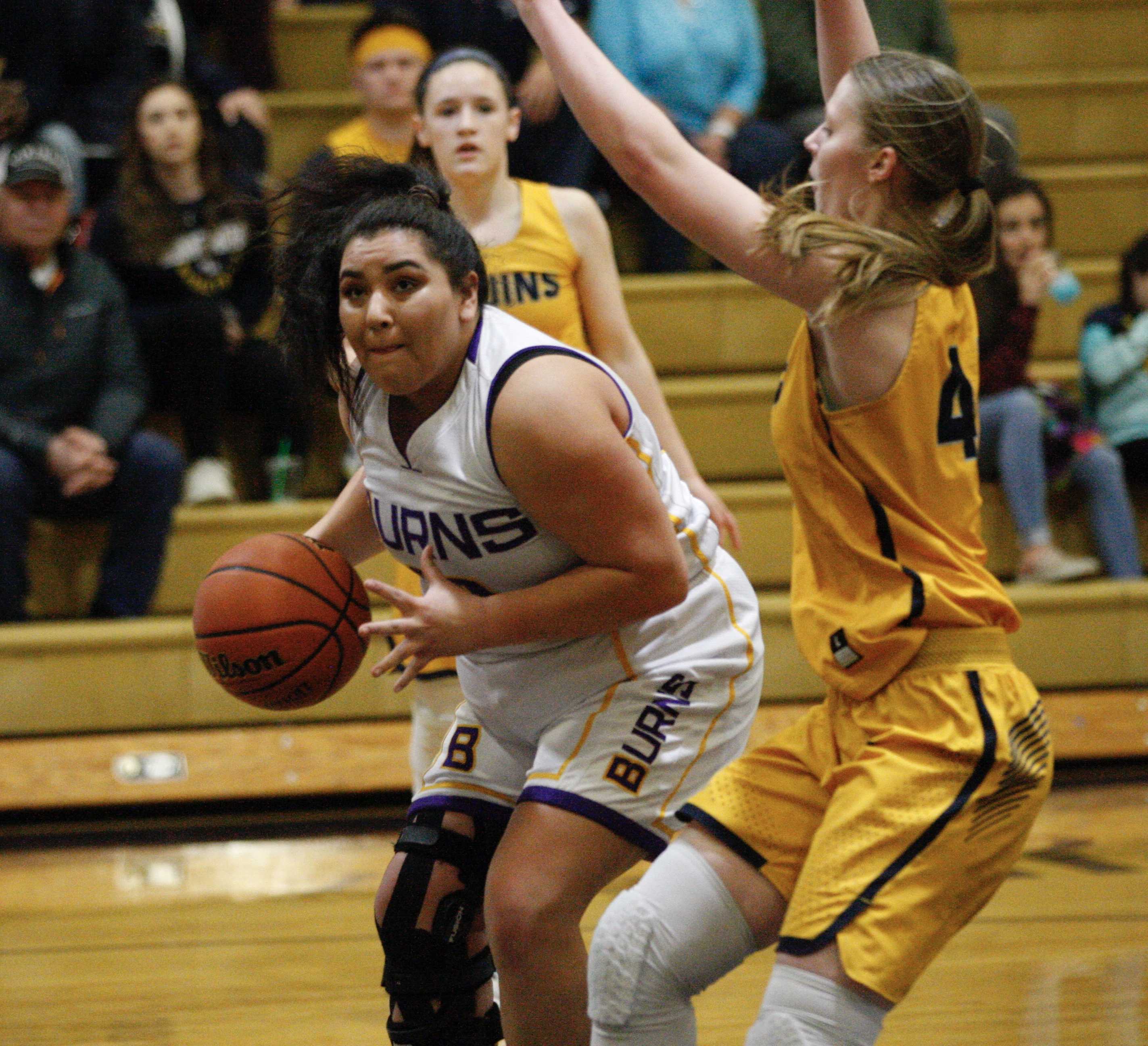 COOS BAY — Nothing came easy for top-seeded Burns in the opening game of the OSAA / OnPoint Community Credit Union 3A girls basketball tournament at Marshfield High School, from the time the Hilanders left Burns early Wednesday morning until the fourth quarter of their grinder of a game against Brookings-Harbor on Thursday.

Then the Hilanders arrived. They landed on the Far West League champion Bruins with a 16-5 fourth period and put them away 57-40.

Until then, the Hilanders had to contend with, in order, blizzard conditions in the Cascade Mountains, an early wakeup for a 1:30 game, then a Brookings-Harbor team that just wouldn’t go away.

The Hilanders wanted to go the short way through the McKenzie pass to get to Coos Bay on Wednesday, but reports of avalanches sent them north. The Santiam Pass didn’t work, either. Finally, the bus came all the way up to Mt. Hood, through Sandy, and back down I-5. The trip took 11 1/2 hours.

“We were super nervous today,” said Burns coach Brandon McMullen. “It’s always that way with the first team you play. All the teams who play here are the best in their leagues.

“That Brookings-Harbor team can shoot.”

They can press, too. The Bruins came out swarming all over the court and slinging three-pointers from just about anywhere.

But Burns (26-1) has seen it all before, and merely adjusted. The Hilanders edged out to a six-point lead at the end of the first period, then appeared to take control of the game in the second period, when they went out in front by nine.

Then the Bruins (14-9) scored the last seven points of the second period, and when Avanna Pettus dropped a pretty three-pointer at the buzzer, Brookings-Harbor was back in the game.

The Bruin press was having its affect. The Hilanders would commit 20 turnovers for the game.

“Everybody presses us,” McMullen said, “but this team really tested us with it.”

The Hilanders are never without an answer, though, and a few halftime tweaks and they were back in control.

Two of the reasons were sophomore wing Allie Hueckman and senior forward Mileah Skunkcap. Hueckman dropped 4 of 7 three-pointers and led both teams with 22.

Skunkcap, a Blackfoot-Paiute power forward despite her 5-7 height, was less visible. She had only eight points, but they all came at critical times. The 10 rebounds, Richter-scale picks and ability to calm down her younger teammates mattered just as much.

“I’m supposed to be a leader,” she said, “and keep the team calm. I post up, get some screens and score if needed. I just wanted us to keep our heads in the game.”

She was also supposed to ignore a torn meniscus in her right knee. That’s on top of the complete rebuild on the same knee at the end of last season. She has to ice her knee after every game.

The Bruins were still in range at the end of three quarters, but the Hilanders held them scoreless in the last 4:58 of the game, hit 7 of 10 free throws and cruised home.

Lexi Schofield hit five three-pointers for the Bruins and led them with 19 points. Point guard Aundraya Ceja added 12 for the Hilanders.

Clatskanie 35, Oregon Episcopal 27: A pair of sophomores teamed up for 29 points and the Tigers (19-4) advanced to the semifinals with a defensive victory.

Post Shelby Blodgett had a rare stat line with more rebounds than she had points. She scored 16 points, but hauled down 21 rebounds to keep the Aardvarks off the boards. Sophomore guard Olivia Sprague added 13 points in the victory.

The Aardvarks (16-9) led only a few times, in the first quarter, but played from behind most of the game. A late run got them to within six points, but the Tigers sealed it at the free throw line.

Blanchet Catholic 46, Vale 35: The third-seeded Cavaliers had a heck of a time with the No. 11 Vikings before exploding in the fourth quarter to avoid the upset and head for the semifinals.

The Vikings (15-11) led from the beginning until the early part of the fourth quarter, when Kalea Salang hit a layup that tied the game at 29-29 and ignited a 10-2 run that finally put Blanchet (23-4) in command and control of the game.

Ana Cornado scored nine of her game-high 21 points in Blanchet’s fourth quarter burst, and added 10 rebounds and three assists to the cause.

Salem Academy 42, Warrenton 26: Senior forward Grace Brown had a monster night for the winning Crusaders (24-4), who will play PacWest Conference rival Blanchet Catholic for the fourth time this year in Friday’s semifinals.

Brown, a 5-10 senior, scored 18 points and collared an impressive 20 rebounds. She also passed for four assists. And the second-seeded Crusaders needed it all to get past the seventh-seeded Warriors (20-8).

Warrenton led after a period, was and was still only seven points behind at the end of three quarters — plenty of time to make a run and steal a game. But the Salem Academy held the Warriors to five points in the fourth period to end any hopes.