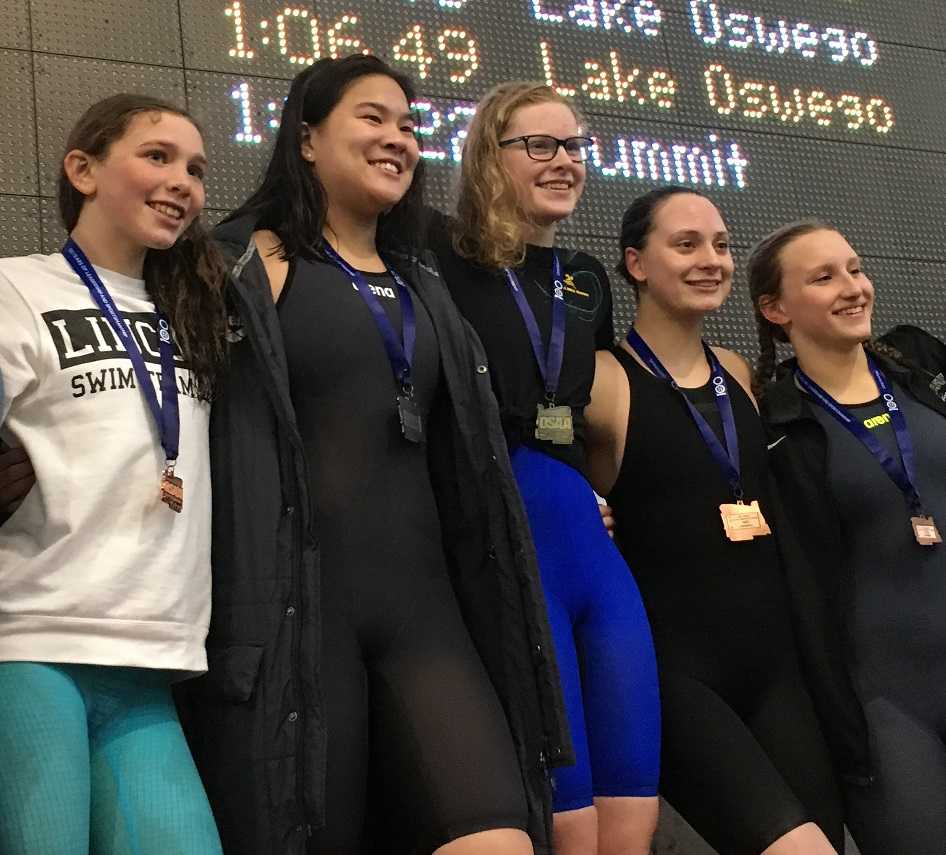 Aloha's Kaitlyn Dobler (center) with the other finalists from the 100 breaststroke.

The Crusaders outscored Sunset 130-99 to claim their seventh title in 11 seasons and first since 2016. Bend and Oregon City were a step below the frontrunners with 50 and 47 points, respectively.

“As always, they all stepped up,” Jesuit coach Bryan Butcher said of his deep girls team. “It’s kind of surreal that some of the seniors are done, so it was nice to see them end on a high note. These last two years were so close. They were hungry for it.”

Senior Sofia Nosack won the 500-yard freestyle and junior Isabella Wallace won the 100 freestyle for the Crusaders, who also finished first in the 200 medley relay.

The Crusaders, who beat Sunset in Metro League dual and district meets, needed to keep their foot on the accelerator against the Apollos, who had several outstanding performances.

“I’m very pleased,” Lindsay said. “Last year I had a concussion, so I was in a position where I wasn’t swimming the times I wanted to swim. And I felt like I was not bringing what I needed to bring to the team. I’m really, really excited this year that I’m able to step up a little bit.”

“I’m a little disappointed in the 2-free. I didn’t get the overall state record, but it was still a good race,” Gardner said. “And the 100 fly was a little better than I thought it would be. I’m excited because we didn’t taper for this. It’s a good swim, for sure.”

Sunset’s 400 freestyle relay – Tia Lindsay, sophomore Kiki Lindsay, freshman Hannah Trainer and Gardner – clocked 3:24.98 to break the 2018 mark of 3:25.69. Tia Lindsay is the only holdover from that relay team.

“I haven’t gone as fast as I was last year, but I still feel good for the next couple of meets,” Dobler said. “When I actually do a taper and then a meet, it’ll be good.”

Back before Bend and Summit combined to win the last seven 5A titles, Crescent Valley of Corvallis had a string of five consecutive championships.

With Bend and Summit moving up to 6A this year, the Raiders regained their perch at the top, scoring 79 points to beat West Albany (49) and North Bend (41), last year’s small-school champion.

“It’s a totally different meet than it was last year,” Crescent Valley coach Rex Watkins said. “You throw Bend, Mountain View and Summit into this, it would push a lot of these kids out.

“It totally changed the meet. So we’re happy to walk out of here with a No. 1 trophy. It’s been fun to watch the other kids rise up and get a chance in 5A. Some of those teams haven’t had the opportunity before.”

The Raiders won the 200 freestyle relay and got two titles each from juniors Francesca Criscione (100 butterfly, 500 freestyle) and Paula Lomonaco (200 freestyle, 100 freestyle). They also got a win from senior Sarah Cordier in the 200 IM.

The title capped a comeback season for Criscione. She swam as a freshman but missed the district meet after falling and hurting her knee. She opted not to swim with the team last season, but decided to return this year.

West Albany finished first in the 200 freestyle relay and got a win from senior Bailey Dickerson in the 50 freestyle. Wilsonville sophomore Abby Maoz repeated as champion in the 100 breaststroke.

Sweet Home’s depth proved to be too much for Catlin Gabel to overcome as the Huskies won their third title in four seasons.

Sweet Home won two relays, finished runner-up in another and got a title from junior Megan Hager in the 100 freestyle to outscore second-place Catlin Gabel 69-50. La Grande was third with 32 points.

Hager, senior Sarah Hewitt and freshman Jamie Seward swam on both winning relays for the Huskies.

Cook set a small-school meet record in the 50 freestyle (23.50) and repeated her title in the 100 butterfly. Last year, she won the butterfly and 200 freestyle.

In Friday’s prelims, Cook finished behind Hager in the 100 butterfly, but she turned it around in the finals.

“It definitely motivated me for the 50,” Cook said of beating Hager. “I’m glad I got to race her.”