Boys basketball: Chemawa stays hot with win at Delphian
Tweet
The Braves get 23 points from Devonte Beach to beat the Dragons 60-28 for their fourth consecutive win
January 24, 2019 by Jeremy McDonald, jmcdonaldmedia 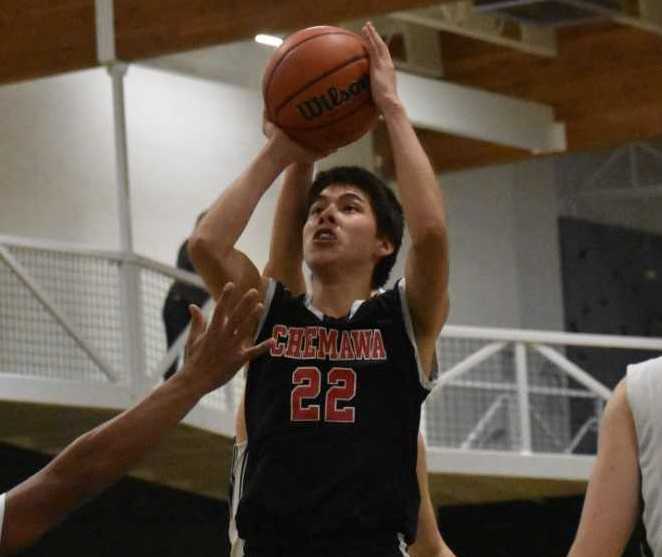 Devonte Beach scored 19 of his 23 points in the first half Thursday. (Photo by Jeremy McDonald)

SHERIDAN – Upstart Chemawa extended its winning streak to four games Thursday with a 60-28 win at Delphian in a 2A Tri-River Conference boys basketball game.

Chemawa, a Native American boarding school in Salem, has won five of six games since returning from the holiday break, during which several of its out-of-state players returned home.

The Braves seem to have found a groove since a stunning 70-68 overtime win at No. 5 Kennedy on Jan. 11. By halftime Thursday, they led the Dragons 36-16 behind 5-foot-11 junior forward Devonte Beach.

“We came out and we got into our offense, got it going early, got the early lead and it continued from there,” said Beach, who scored 19 of his 23 points in the first half.

Chemawa continued its domination in the second half, led by 6-2 senior post Clement AfterBuffalo and 5-8 junior guard Davey Hogan. AfterBuffalo scored nine of his 13 points, and Hogan all eight of his points, after the break.

The perimeter defense with Hogan, Beach and company forced Delphian into turnovers and created rebound opportunities for AfterBuffalo. The Braves held Delphian to 12 second-half points.

“We’ve just got to come out strong in the first half and pushing it,” AfterBuffalo said. “Keeping the tempo and playing smart defense, playing together.”