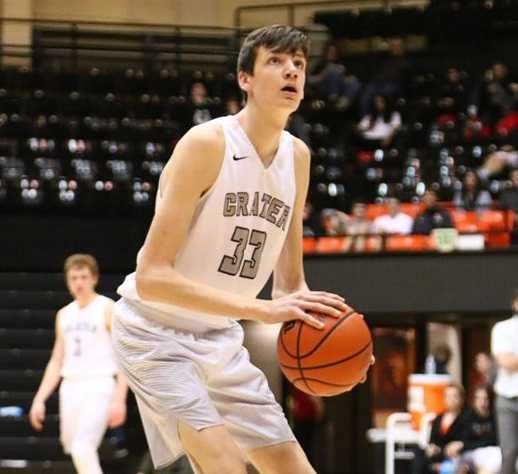 Nate Bittle’s days of flying under the radar are over.

The word is out on the 6-foot-10 Crater sophomore, who emerged as a freshman to help lead the Comets to the 5A semifinals. With eight Division I offers, he has become the worst-kept secret in Oregon high school basketball.

But that’s just fine with Bittle, who seems to thrive under the attention.

“Any situation we’ve ever put this kid in, he’s always risen to the occasion,” Crater coach Chris Schmerbach said. “He really shines under the bright lights, which is nice. Most 15-year-olds, with the amount of exposure and pressure and hype this kid has had – I’ve never seen anything like it – they might not handle it the right way. But he’s definitely stepped up.”

Bittle was a starter for his entire freshman season, showing a sweet shooting stroke (40 percent from three-point range) and innate feel for the game while averaging nine points, seven rebounds and four blocked shots. Now he is back, four inches taller than this time last year, and ready to show what he can do as Crater’s leader.

“I think I’ve improved a lot from last year,” Bittle said. “Last year, I didn’t really do a lot of scoring inside, and this year I’m like 75 to 80 percent field-goal percentage inside. I decided to get into the post more, like flashing and just attacking.”

Bittle is rated as a five-star recruit. Colleges are salivating over what he will become as he fills out his 185-pound frame, with Oregon, Oregon State, California, UCLA, USC, Arizona, Portland and Tulane offering scholarships.

The versatile Bittle is surging with confidence after spending his summer playing for West Coast Elite, a Northern California-based club. As a member of a 16U team that finished 35-4, he was teammates with Arizona commits Nico Mannion and Josh Green.

“There were a lot of great players I played against,” Bittle said. “I played up a level, so it was a good experience. That boosted my confidence a lot.”

It shows. Through five games, he is averaging 23.2 points, 9.6 rebounds and 6.6 blocked shots. The fifth-ranked Comets (4-1) -- who lost three starters from last season, including Midwestern League MVP Kiefer Edwards -- need a big season from Bittle if they are going to go anywhere.

“We lost a lot of good players, but a lot of players have gotten better from last year, so we’ll see,” Bittle said.

Schmerbach said that Bittle “hasn’t played his best ball yet” as he adjusts to his expanded role.

“Last year he was a big part of what we did, but it’s just a little bit different,” Schmerbach said. “Now he’s having to lead a new team and he’s being counted on for a lot more, leadership-wise and being able to produce.”

Bittle’s workload became heavier when junior point guard Jayden Vranes, the other returning starter, broke his wrist two minutes into the team’s season opener in Hawaii. So in addition to stretching the floor with his shooting and providing interior scoring, he is bringing the ball up the court as a point forward.

“He’s doing it all for us, which I think is great for him, development-wise,” Schmerbach said.

Bittle’s ball skills have improved this season. He can score off the dribble, confidently attacking gaps in the defense. He is a threat facing the basket as a scorer and passer, and is learning when to take his defender into the post.

“He has an exceptional feel for the game for a kid his age,” Schmerbach said.

North Eugene coach Bill Wagner saw more than enough of Bittle in his team’s 58-46 loss to Crater on Tuesday.

“The thing that makes him tough is he can shoot it out to NBA three-point range, and he’s got good footwork in the post, and he’s got a good mid-range game,” Wagner said. “He’s got the complete skillset. It’s hard to guard him with just one person.”

Wagner said Bittle has a similar impact as Oregon’s Bol Bol with his versatility on offense and game-changing length on defense.

“Even if he doesn’t block a shot, he changes it,” Wagner said. “And he covers so much ground. There were times when it looked like we had an easy path to the hoop, and a guy shoots a lay-in and it’s batted off the backboard.

“He’s really young, but he’s crafty like a senior. He’s a difference-maker for anybody. You put him on any team, and that team is ready to compete. He’s a kid that will be a difference-maker not only at the high school level, but at the college level.”

Bittle’s father, Ryan Bittle, played at Oregon Tech for the legendary Danny Miles. Ryan Bittle and Schmerbach have a kinship as former players at College of the Redwoods and are on the same page about Nate’s progression as a player.

“We wanted to develop him kind of how it’s done in Europe, just teach him how to play all spots,” Schmerbach said. “He’s always played with older kids and adults. He hasn’t always been the biggest kid on the floor, so sometimes when he’d play with those older kids, he’d look to pass first. So I think that’s all kind of contributed to where he’s at as a player.”

What they didn’t anticipate was Nate’s big growth spurt in the last year. His father is 6-7, so Nate is in uncharted territory.

“We kind of joked early like, ‘Yeah, Nate’s going to be 6-10 someday,’ when he was in the sixth or seventh grade, and it kind of happened,” Schmerbach said. “I wouldn’t be surprised if he ends up being 7-foot.”

Bittle is discovering how to use his newfound length on defense.

Even if he doesn’t grow another inch, Bittle will be one of the state’s most sought-after recruits in years. Rivals and ESPN rank him as the No. 12 and No. 20 sophomore recruit in the nation, respectively.

It would be easy for him to get caught up in his own hype, but Schmerbach believes Bittle is keeping a level head.

“I think he’s handling it great for someone that’s 15,” Schmerbach said. “I can’t imagine that’s an easy thing. He has a really good group of people around him. He’s got strong parents, a strong family. He’s got solid coaches, both in AAU and our program, that are preaching, ‘You’ve got to be humble, and you’ve got to be hungry.’

“I think Nate would agree that there’s a lot left to improve on in his game so he can become the player we know he can become.”