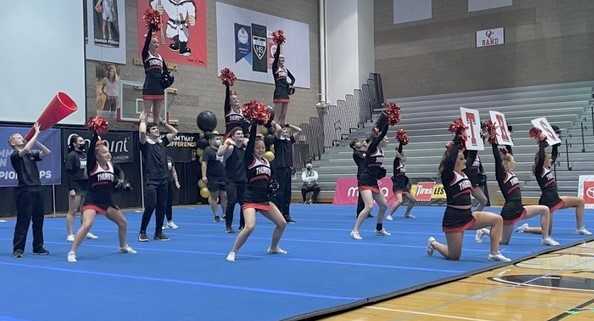 Thurston, shown in last year's state championships, is among the teams expected to contend this year.

It’s the third week of January, and there are only three weeks left until the OSAA cheerleading championships Feb. 11 at Oregon City High School.

Teams have officially registered for the event, and the nerves have started to kick in. The work that has been put in since last spring is going to be showcased, and state champions will soon be crowned.

With the addition of the Game Day Division, there has been an influx of teams registered for this culminating event. In addition, for the last three weekends, the sanctioned qualifying events have also seen many more teams taking the mat to prepare for the state championships.

In the inaugural 4A/3A/2A/1A and 6A/5A Game Day division, Thurston, Central and Westside Christian have started the year with strong performances. With three weeks left until the state championships, there are certainly going to be other teams vying for that top spot.

Rainier and Santiam Christian, last year’s first- and second-place teams, continue to battle it out in the 4A/3A/2A/1A division. However, Delphian and Central Linn, previous state champions, do not plan on giving up without a fight.

In the 4A division, Gladstone and Sweet Home are working hard for that top spot. Newport, a former champion, is also looking to take back the championship. However, newcomers moving from 5A to 4A this season, The Dalles and North Bend, could be surprise contenders.

Last years champion in the 5A division, Lebanon, has come out of the gate strong and it’s clear they are working to repeat. However, South Albany and Ridgeview show no signs of giving up the fight for that state title.

In the 6A Small division, Newberg appears to be the favorite in their quest for their ninth state title. However, David Douglas and Lakeridge are working hard to dethrone the champions and take home that top spot

In the 6A Large division, Westview looks like they could add a 12th state title. However, Aloha and West Linn are not going to make that historical feat easy for the Wildcats.

In the Co-ed division, Tualatin has come out ready to battle for that blue trophy. However, McMinnville, former state champion, is working hard to get back on top.

“Whether it is because we have gotten past the restrictions at competitions, or the fact that we are appreciating what we have after the last few years, there is great camaraderie between the teams," Devereaux said. "It is awesome to see teams cheering for each other; to see rivals cheering for rivals.”