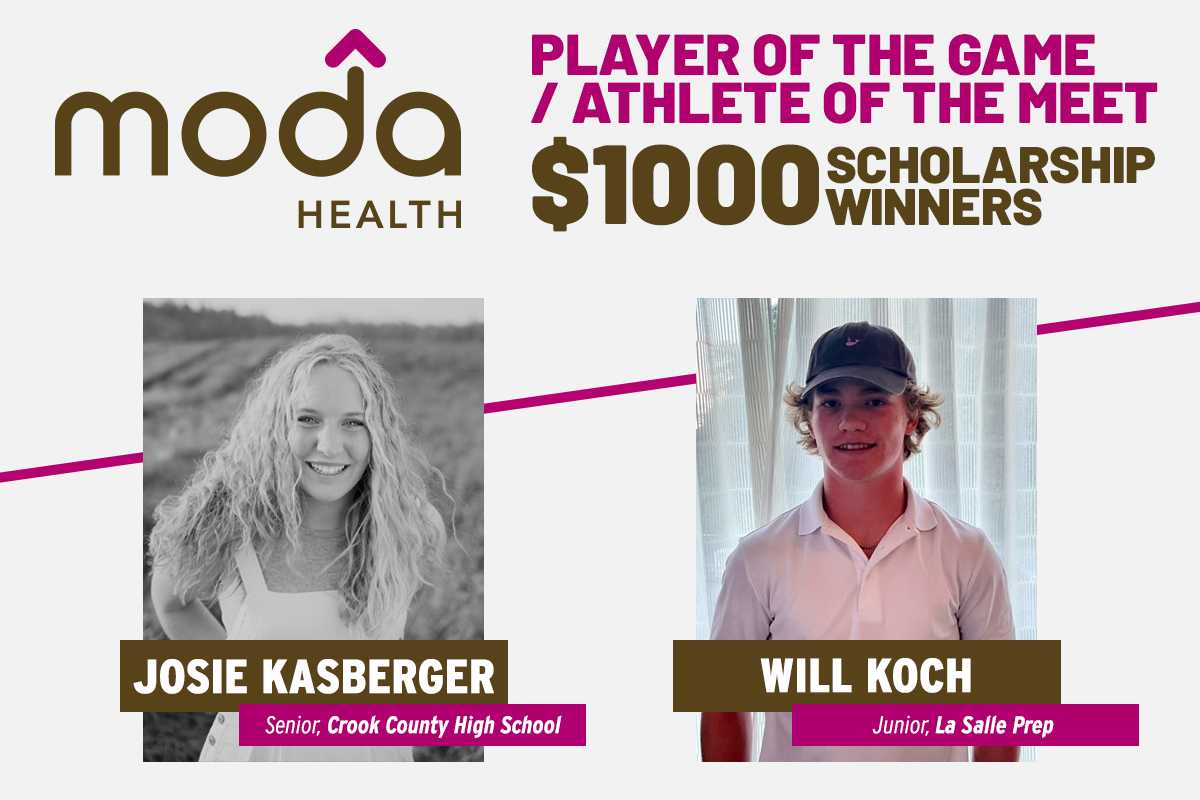 The Oregon School Activities Association (OSAA) and Moda Health announced today the winners of the 2021-2022 Moda Health Player of the Game / Athlete of the Meet Scholarships. Senior Josie Kasberger of Crook County High School and junior Will Koch of La Salle Catholic College Preparatory each receive a $1,000 scholarship to the school, college, or university of their choice.

Moda Health has sponsored the Player of the Game / Athlete of the Meet program since the 2010-2011 school year. Throughout the school year, a total of 406 student-athletes receive recognition for their achievements in the following events:

﻿All 2021-2022 varsity students in OSAA-sanctioned activities are eligible to apply for a scholarship. To apply, a student must write a personal essay describing areas in which he or she has demonstrated leadership through involvement in academics, co-curricular activities, and community organizations. Two letters of recommendation are also required.

Josie Kasberger is a three-sport athlete, having been a four-year varsity letterwinner in volleyball, basketball, and track and field. In the classroom, Josie graduated as Crook County’s Salutatorian with a 4.3 GPA, taking numerous honors and AP classes. She was highly engaged, having served on ASB and Student Leadership, and participated in the NJROTC program, Link Crew, and Honor Society. Josie is also well-decorated as an athlete. On the volleyball court, she was team captain and an all-league first team member while leading the Cowgirls to a top-8 finish at the state tournament each year. She participated in the state tournament as a member of the basketball team. Josie was a two-time captain of the track and field team, competing in the javelin, shot put, and discus. At the 2022 State Championship at Hayward Field, she finished third in discus, sixth in shot put, and seventh in javelin. With all these accomplishments, Josie says, “I will forever be more thankful and proud of my family.” She grew up on the family farm, feeding cows and changing irrigation water year-round. She also experienced both parents’ successful battle with cancer, her mother during elementary school and her father just last year. These experiences have driven her to become a pediatric surgeon. Josie will attend California State University at Northridge to study biochemistry.

Will Koch is a member of the boys golf team, leading the Falcons to a third place finish by being medalist (State Champion) at the 2022 5A State Championship at Trysting Tree Golf Course. He also has participated in baseball during his time at La Salle Prep. In the classroom, he holds a 4.0 weighted GPA while taking multiple AP and honors courses. Despite his success on the golf course, where Will really stands out is his service to others. Just before his freshman year, Hurricane Maria devasted Puerto Rico. With donations pouring in, Will had an idea for something different: raise money and baseball gear for kids. In two months, he collected 500 bats, 300 gloves, 3,000 baseballs, and over $3,000 to cover shipping costs. Will delivered the equipment to Puerto Rico with the help of former MLB slugger Carlos Delgado. Locally, he cooks meals for Transition Projects, which helps the houseless in their transition to finding a new home. He also volunteers with the National Honors Society by tutoring underclassmen.

For more information on the Moda Health Players of the Game / Athletes of the Meet program, please visit http://www.osaa.org/awards/player-of-the-game.