Softball: State power Bend will have change at the top
Tweet
The retirement of coach Tom Mauldin leaves a void for the Lava Bears, who emerged as a 6A contender during his four-year tenure
July 30, 2022 by Jerry Ulmer, OSAAtoday 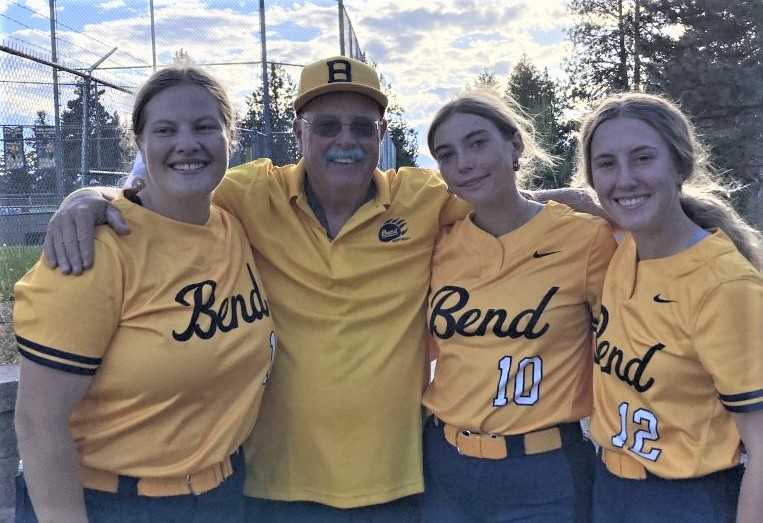 Bend's softball team, which spent most of last season ranked No. 1 in the OSAAtoday 6A coaches poll, is looking for a new coach after the retirement of Tom Mauldin.

Mauldin, 72, said he stepped down for family and health reasons. He went 65-12 from 2019 through last season, when the Lava Bears finished 29-2 and reached the state semifinals.

“It just became too much time,” said Mauldin, who lives 20 miles away in Redmond with his wife Cat. “It's for the right reasons. … Our time now is 100 percent about health and family. We have a dozen grandchildren and are excited to have more time with them.”

“Bend High softball has not traditionally been a power, and he turned it into a power,” Norby said. “It's come a long ways.

“He was not the kind of softball coach that showed up for the season and then was gone. He was on campus almost every day. He was very, very involved. I couldn't imagine anyone putting in more hours as a coach than he did. It was very much appreciated. I would imagine that at 72 he was just kind of tired.”

Norby said he already has received applications for the position but plans to keep the job open for the rest of the summer to “see what shakes out.”

“That's a big hire for us,” Norby said. “We think it's one of the best softball jobs in the state. We'd like to have a little bit bigger pool to go through before we hire somebody. We want to hire the right person. We want to make sure it's somebody that's going to protect the program.”

Mauldin said his goal was to coach four seasons at Bend. He leaves the Lava Bears in good shape as all but three starters are eligible to return for the 2023 season, including the state's two-time Gatorade player of the year in junior pitcher Addisen Fisher.

“The program has a great base,” he said. “It's going to be an outstanding situation. The coach after me is going to do a better job. A lot of things are in place and they can just take it to the next level. If that's winning a state championship, no one will be cheering louder than me. I'm going to be one of their biggest fans.”

Bend made significant upgrades to its softball facility during Mauldin's tenure. With help from volunteers, the school put in a bullpen platform in his first year and added a locker room to the dugout in his second year. Other improvements included covering the bullpen to use as a batting cage and laser-leveling of the playing field.

“I'm very proud of that,” Mauldin said. “One of the things we preached was to be a do-er. The school was very supportive. They built a nice facility, one of the nicest ones in Oregon.”

Bend outscored its opponents 277-38 last season, which ended with a 4-0, nine-inning semifinal loss to Oregon City. The Lava Bears, who move to 5A next season, must replace three college-bound infielders in third baseman Lena Zahniser, shortstop Violet Loftus and second baseman Emma Sullivan.

“The team is loaded,” Mauldin said. “It's got very good players coming back. It's got the hitting and pitching.”

Mauldin, an instructor at softball clinics and a private pitching coach, has had a long career in coaching softball.

He was the head coach at Tracy High School in California and spent four seasons as the coach at Sisters (2007-10), compiling a 57-45 record, including a school-record 22 wins and 4A quarterfinal appearance in 2010. He also assisted at two Idaho colleges – Northwest Nazarene and College of Idaho – and was interim head coach at Blue Mountain Community College.

“He and his wife have poured their heart and soul into softball for years all over the place,” Norby said. “It was a family affair.”

Maultdin said he is looking forward to having time off – he and Cat plan to take three cruises in the next two months – but he will miss being part of the Bend program.

“There are a lot of wonderful people in that Lava Bear family,” he said.