Boys basketball: Tualatin outlasts West Linn 68-66 in OT
Tweet
No. 1 Timberwolves come from 12 points behind in second half to beat No. 3 Lions on Malik Ross' layup with 1.5 seconds left
February 22, 2022 by Jerry Ulmer, OSAAtoday 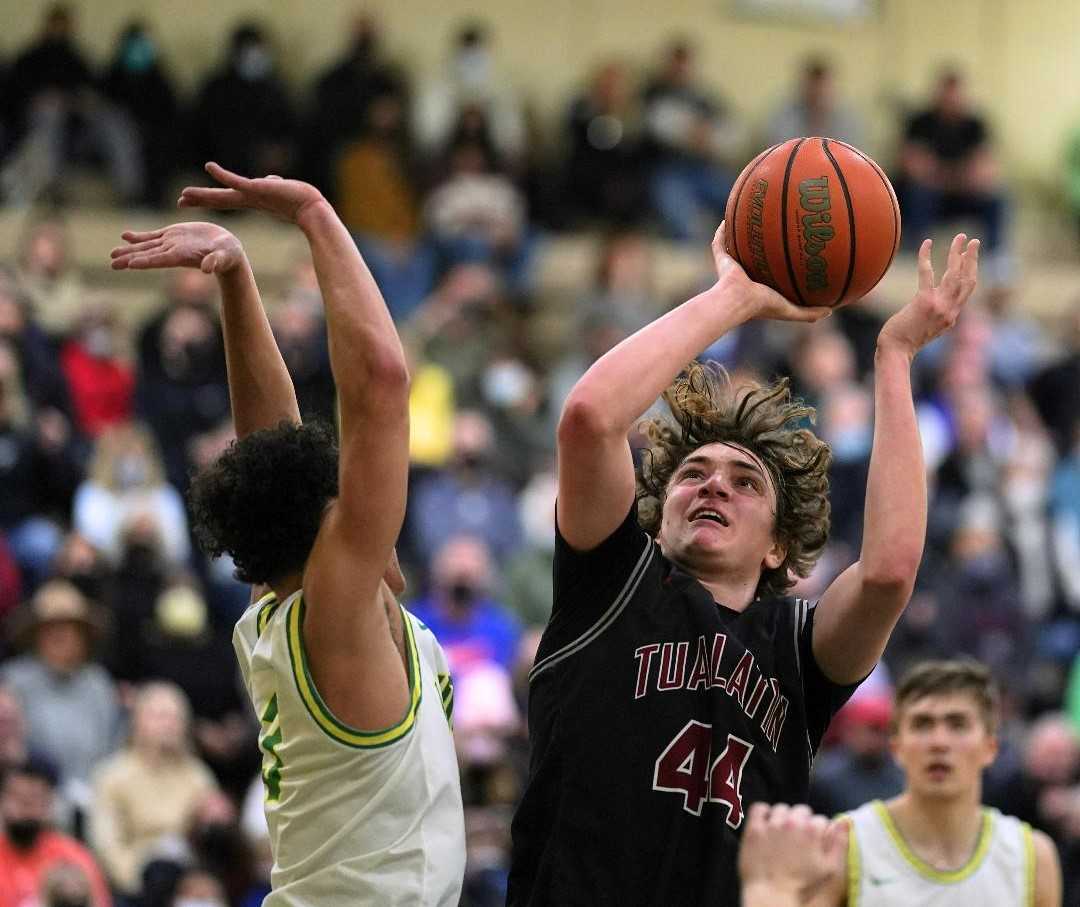 Tualatin's Jalen Steppe scored 16 of his team-high 20 points in the second half Tuesday at West Linn. (Photo by Jon Olson)

WEST LINN – The inside scoring of 6-foot-7 sophomore Jalen Steppe and the slashing of senior guard Malik Ross propelled No. 1 Tualatin to its biggest win of the boys basketball season Tuesday night.

Steppe sparked a second-half comeback – scoring 16 of his 20 points after intermission -- and Ross provided the winning basket as the visiting Timberwolves outlasted No. 3 West Linn 68-66 in overtime to take over first place in the 6A Three Rivers League.

With the score tied, Ross drove for a left-handed layup with 1.5 seconds left in overtime for Tualatin (19-2, 9-1), which extended its winning streak to nine games.

“We were trying to get it into Jalen Steppe, because he was killing all game,” Ross said of his final basket. “He brought a lot of attention, so he just passed it out to me and I had to go get a bucket. I struggled all game, so that one felt pretty good.”

The Timberwolves control their own destiny for the league title after beating West Linn (17-3, 9-2) for the second time this season. They can wrap up the outright title with wins over Canby and Lake Oswego, no small chore considering they beat Canby 71-66 and lost to Lake Oswego 63-61 in the first round of league play.

“It means a lot, but we still have two more tough games ahead of us,” Ross said. “We're going to celebrate this one and move on and try to win league.”

Tualatin coach Todd Jukkala liked how his team rose to the occasion on the road.

“Our guys compete, and that's what we kind of hang our hat on is competing every night,” Jukkala said. “These guys find a way as the game goes on because we haven't had a lot of practices to really do what we normally do in a season.”

“First half, I was playing timid, more like a guard,” Steppe said. “I was trying to use my AAU skills, and I just realized, I don't need to do that. So I just decided to be aggressive, use my body, use my pump-fakes, use my core skills, instead of trying to go out and do extra stuff. When I went back to my original game, that helped a lot.”

Steppe continued to pound away inside in the fourth quarter. He had two baskets in another 8-0 run as the Timberwolves took a 57-51 lead with 2:38 left.

“They started going downhill and I thought we kind of started playing back on our heels a little bit,” West Linn coach Eric Viuhkola said. “The biggest thing is they just started getting a bunch of buckets. I mean everything was at the rim.

“Jalen Steppe, and we knew he was real talented, and he just took over in the third quarter. He got some easy ones, but he made some tough plays, too. I really thought he was the difference."

West Linn wouldn't go away, however. Lions junior point guard Jackson Shelstad drew a foul on a three-point attempt with 12 seconds left and made all three shots to tie 61-61.

Tualatin had a chance to win at the end of regulation but Ross missed a jumper in the lane with four seconds to go, and time expired on the rebound scramble.

West Linn junior forward Mark Hamper hit a three-pointer for a 64-61 lead to start overtime and scored on a baseline drive to keep the Lions ahead 66-63 with 1:35 remaining.

Timberwolves junior guard Josiah Lake countered with a three-pointer to tie 66-66 with 1:25 to go, and after West Linn failed to score, Tualatin ran down the clock for Ross' winning basket.

“There's nobody I trust more than Malik,” Jukkala said. “At the end, he finished it off.”

Ross started slow but came on strong late, scoring 12 of his 17 points after halftime.

“I love playing with Malik. He's my guy,” Steppe said. “I was just telling him to keep his head up. … He came through clutch. He won us that game, really.”

West Linn called timeout to set up a full-court inbound play with 1.1 seconds left but failed to get off a shot after a long pass was batted away.

So how were the Timberwolves able to bounce back after falling behind by double digits in a packed West Linn gym?

“Just bringing more energy,” Ross said. “They had the energy on their side. They have a hostile crowd. So we just had to find a way to get the momentum on our side.”

Ross said that Steppe was the catalyst for turning the momentum. Steppe finished 8 of 11 from the field.

“He played his game,” Ross said. “I think his height separates him from everybody else. … He knows how to take over a game, and I think that's what he did tonight. He did that so great. It's so tough to do that as a sophomore, so big props to him.”

Shelstad and senior guard Zeke Viuhkola scored 20 and 18 points, respectively, to lead West Linn, which also got 15 points from Hamper. The Lions finish their regular season Friday at Oregon City.

“I thought we played hard and I thought we played together,” Eric Viuhkola said. “I don't think we've been playing hard lately. We made some bonehead plays and were kind of sloppy with the ball, but I'm just proud of them that they competed and played their butts off. We've got to get some things worked out and I think we're going to be fine.”