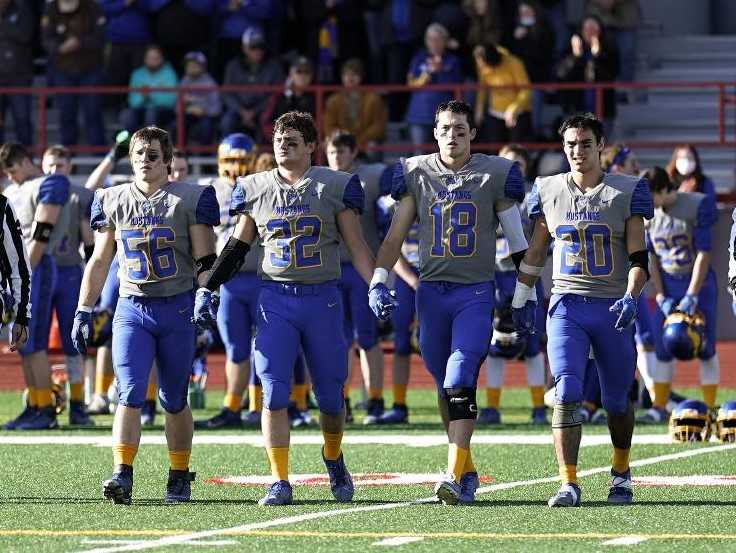 Heppner players prepare to meet Coquille in a 2A semifinal last season. (Photo by Jon Olson)

It's starting to appear as if nine-player football is coming to Oregon next season.

In an update released last week, the OSAA football ad hoc committee recommended that 2A schools switch from the traditional 11-player game to nine-player. It also is in favor of 1A schools continuing with eight-player and six-player.

OSAA assistant executive director Brad Garrett, who oversees football, said the switch to nine-player will help keep the sport alive at smaller schools in 2A.

“We have a dozen schools down there at the bottom of 2A, they're struggling to keep 11-player football,” Garrett said. “Nine-player makes a huge difference for a school. You lose two linemen – the two tackles – and that's traditionally where those teams will struggle, finding those bodies to play up front.”

In the previous update, the committee recommended that 2A continue with 11-player. But many 2A schools responded by saying they preferred going to nine-player.

A survey of 2A schools revealed that 22 were in favor of nine-player. Ten schools preferred 11-player but would accept nine-player. Another four indicated they wished to move forward with 11-player.

The feedback swayed the committee.

“The committee said, 'We're going to roll back to nine-player,'” Garrett said. “At this point, they've settled in pretty good.”

Greg Grant, who has coached Heppner to three state championships, said he is on board with the change to nine-player.

Knappa athletic director Kirk Miller also said that the move is “for the betterment of all 2A football.”

“When we're playing teams that, you look over on their sideline, and they only have 15 or 16 kids, it's just not a healthy thing for the state of football,” Miller said. “We need to look at taking kids off the field so teams don't have to play that 140-pound freshman just to field 11 kids.”

If 2A schools desire to compete in 11-player, they have the option of moving up to 3A. Kennedy, Salem Academy, Stanfield and Colton voted that they would prefer to play 11-player.

“I think there's the potential to see some teams stay at the 11-player level,” Garrett said.

Garrett and Grant said the appeal of nine-player is its “portability.” The schemes of 11-player and nine-player are similar enough to make it easy for 2A and 3A teams to play cross-classification games. Grant said he already has notified Warrenton and Kennedy that Heppner intends to play them in 11-player games next season.

“I think the 11-man game and the nine-man game are highly portable to each other,” Grant said.

Garrett said the transition from 11-player to eight-player makes it a “totally different game,” but that's not the case when comparing 11-player and nine-player.

“The transition from 11 to nine is very easy,” Garrett said. “It adds that ability to schedule locally against schools you may not have wanted to, or been able to play, previously.”

Grant said that 2A and 3A football teams in Oregon “have been linked forever,” and he doesn't want to jeopardize those relationships.

“I think it'll be changed to a certain degree,” Grant said. “You might match up regionally with the school next door, and that game could be a nine-man game one year and an 11-man game the next. I look at it as an opportunity to maintain our connections with the 3A schools.”

Miller said crossover games between 2A and 3A “are going to take some cooperation. But the crossover between eight and 11 is just too great. You won't see teams playing against one another like that.”

On a different note, a major benefit of going from 11-player to nine-player is it can help create more subvarsity competition, according to Grant.

“My hope is that every 2A school sponsors JV football,” Grant said. “Not enough 2A schools have been able to, or have chosen to, put an emphasis on JV football.”

Notes: The committee supports adding an OSAA championship for six-player. The six-player game has not had an official state championship since the OSAA introduced it as a pilot program in 2018. … After considering not allowing teams that are playing down in classification to qualify for the playoffs, the committee now favors an annual review of those teams. Teams playing down would remain eligible for the postseason, but if they win 67 percent of their games, or win a playoff game, they would be required to go back up the following season. … Of the 24 schools that met the criteria to play down one classification for the next two seasons, so far, five have requested to do so: Ashland (4A), Harrisburg (2A), Parkrose (4A), Phoenix (3A) and Southridge. (5A). The other 19 schools – a group that includes 6A teams Cleveland, Grants Pass, Gresham and Oregon City – have yet to request a move.