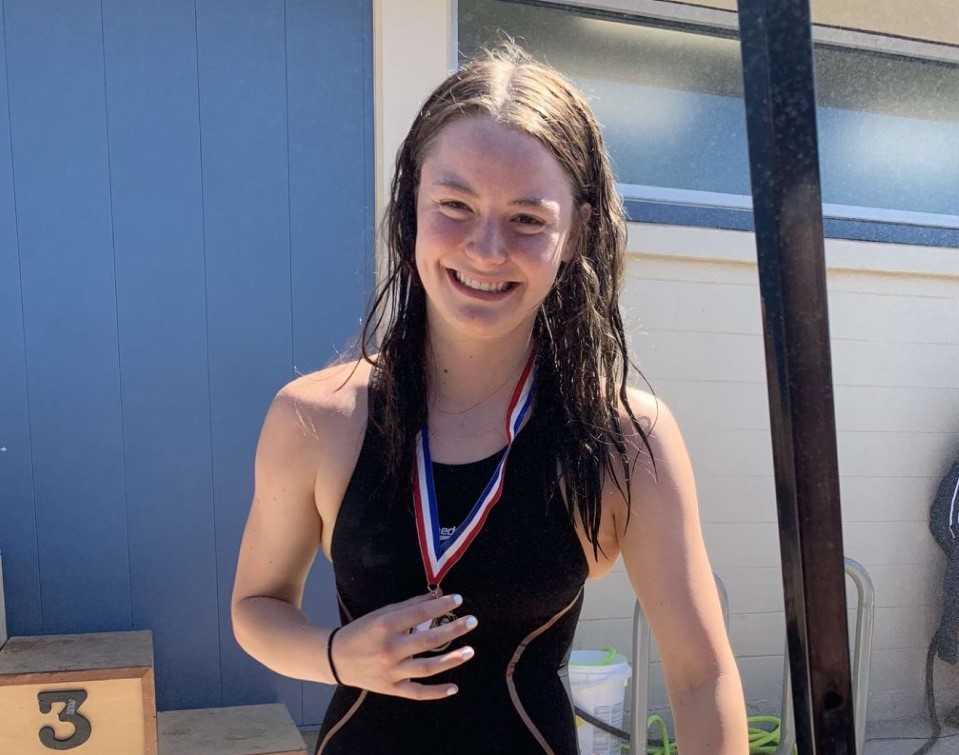 Baker's Brianna Stadler set the OSAA small-school meet record in the 100-yard backstroke as a freshman in 2019.

It wasn't long into the COVID-19 shutdown that Baker standout swimmer Brianna Stadler was so desperate to train, she took to the great outdoors.

With the pools closed, Stadler put on her new wet suit and began working out in the frigid waters of a nearby lake. For a bigger challenge, she even ventured into a river.

“I just went where there was a good current and swam against the current,” said Stadler, now a senior. “My sister came with me and sat on the edge and watched, just to be sure.”

As the shutdown continued, though, the creative conditioning began to take a mental toll on her.

“I tell you, she was about ready to retire,” said Baker coach Randy Stadler, her father. “We had so many pool closures, and no meets. It was really hard to keep her motivated. Every chance the pool was open, it was like, 'We've got to go.'”

Now the outlook has improved for Brianna.

After winning 4A/3A/2A/1A titles in the 100-yard backstroke as a freshman and 100 butterfly as a sophomore, she won the 100 butterfly and 200 individual medley in the 4A culminating week meet last season. And her swimming future is bright after she signed a national letter of intent to NCAA Division II Colorado Mesa in November.

“I did almost quit, but I was like, 'One more year at least,'” she said. “And then college coaches started talking to me, so I was like, 'OK, I have to keep practicing, just in case.'”

The college commitment has given her a boost.

“It was like, 'OK, I have to work hard now,'” she said. “My mindset has definitely changed a lot since I signed. Before that, I was really close to not wanting to swim anymore. I felt like I wasn't going to be where I wanted to be, and people weren't looking at me. So I was like, 'What's the point in me continuing if I'm not going to swim after high school?'”

Between a club meet following the 2020 high school season and the first race of last season in June, she went more than a year without competing. It took her a while to regain the confidence she used to carry into high school meets.

“It was stressful,” she said. “I used to be real nervous when I raced when I was younger, and then it kind of stopped because I was going to bigger races. During the high school seasons, the small meets wouldn't make me nervous at all. But when we started getting back into it, I was super nervous, because I was like, 'I don't know where I am right now.'”

In bidding to earn a scholarship after her sophomore year, Stadler felt as if she was falling behind swimmers from other states that had fewer restrictions on training and competition. When California college coaches told her she needed to drop time to meet their scholarship standards, she became frustrated.

“I'm like, 'I can't do that. I don't have races, I'm not practicing, I don't have water time,'” she said. “Oregon was a lot more restrictive than other states.”

As pools gradually reopened, she did her best to capitalize on the limited time allotted in the water.

“She is a very self-motivated swimmer,” said Randy, who took over as Baker's coach this season. “She puts her mind to something, and she goes out and figures out how to achieve it.”

Said Brianna: “For a long time, I was just writing my own workouts, which was kind of hard. Once you're actually swimming, it's hard to make yourself think with it.”

Colorado Mesa contacted her in late summer and expressed their interest. She visited the campus in September, committed in October and signed in November.

Brianna said that the return to a normal swim schedule this season “definitely was motivating, and I feel like I'm improving a lot.” She plans to swim the 100 butterfly at state and is deciding between the 100 backstroke and 200 I.M. for her second event.

She hopes to become the first Baker swimmer to win state titles in all four years, even though the 4A culminating week meet was not recognized as an official state meet. She is shooting for a sub-58 time in the 100 butterfly.

“I just want to get in really good shape for college because I'm nervous for how the last couple years have been, that I'm not going to be able to do as much as other people because they have more practices,” she said.