Boys basketball: 6-11 Maurer evolving into 'dominant force'
Tweet
Sweet-shooting Cascade Christian sophomore Austin Maurer shows he can mix it up inside, too, by adding muscle and power
January 8, 2022 by Jerry Ulmer, OSAAtoday 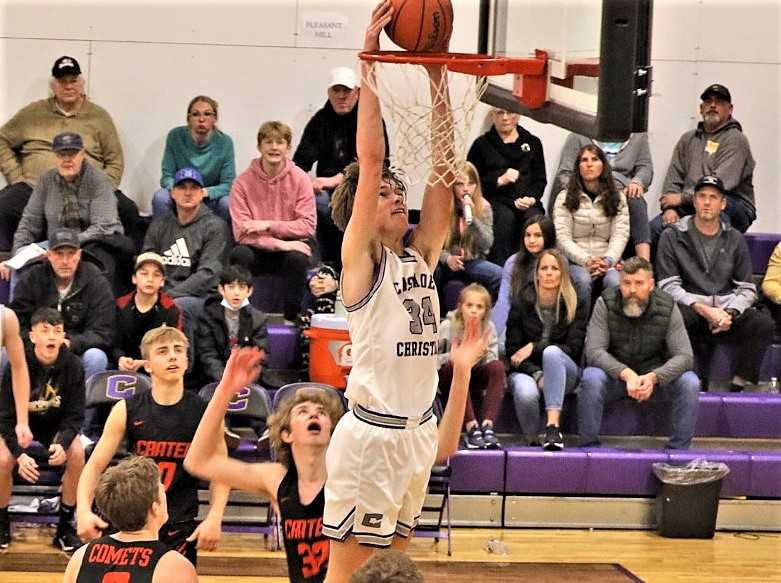 Now a 6-11 sophomore, Maurer is starting to assert himself inside.

“He's doing a good job of learning how to play inside and being a dominant force,” coach Brian Morse said. “His tendency last year was to pop outside, pick and pop. He's our best three-point shooter, hands-down. This year, we're having a bigger emphasis on him being dominant inside and taking over a game, if he can.”

Maurer was outstanding in leading Cascade Christian to the championship of the Crusader Classic New Year's Invitational at Salem Academy last week. He had 36 points and 17 rebounds against Nyssa, 27 points and 19 rebounds against Regis and 35 points and 18 rebounds in a 62-60 overtime win over No. 4 Dayton in the final.

The 36-point performance came within one point of the school record. His father Marty – a tight end on Oregon State's Fiesta Bowl team in 2001 – and Morse are among the three record-holders at 37 points.

The Challengers needed Maurer to pick up the scoring slack after they graduated two first-team all-state players in Morgan Law and Matt McPheeters, who combined to average 27.8 points last season. Maurer has responded in a big way, shooting 58 percent from the field, including 43 percent from three-point range (21 of 51), and 78 percent on free throws.

“This year we're trying to run everything through him,” Morse said. “I told him he needs, as a goal, to score 30 points a game. We need 30 and 15 every game. He's getting 25, but we're trying to push him, because he could be so much better.”

Cascade Christian, runner-up to Oregon Episcopal in the 3A tournament in 2020 and to Yamhill-Carlton in the 3A culminating week tournament last season, has retooled around its two returning starters in Maurer and senior point guard Cody Reece (5-10). Maurer's twin brother, Peyton (6-3), and juniors Triston Wallace (6-1) and Landon Hess (5-11) are new to the starting lineup.

Maurer's presence helps make up for the team's lack of experience. He has taken on more responsibility not only on offense, but also on defense, where he also has made strides.

“We're trying to keep him around the basket more defensively as a rim protector,” Morse said. “It seems like he's in every play. He makes a huge impact as guys penetrate. It allows our guards to really pressure the ball and funnel the guys into him. He's learned to alter shots, and not try to swat every shot. Tip it, rebound and go.”

Maurer suffered a separated sternum last season and missed the culminating week tournament. He was cleared by Aug. 1 and spent the rest of the summer playing with the Oakland Soldiers AAU team and doing workouts with Cascade Christian assistant Scott Morse, Brian's son and the 3A player of the year in 2009.

The time Maurer spent in the weight room paid off.

“The biggest difference body-wise is he's so much stronger now,” Brian Morse said. “He still has a long ways to go, but he doesn't get pushed around as much.”

College have taken notice of Maurer. He already has an offer from Portland, and among others showing early interest is Oregon State, which watched him play in the tournament at Salem Academy.

“I see him for sure playing somewhere in the Pac-12,” Brian Morse said. “His dream is to play for Gonzaga. The ceiling is so high for him. I've never had a player with that type of height that can shoot outside, create off the dribble, knock down his free throws and post up.”

Led by Maurer and Reece, a fourth-year starter, the Challengers are motivated to bring back their first state championship since 2009 this season. They know that teams such as No. 1 Westside Christian and No. 2 De La Salle North Catholic are big obstacles, however.

“Austin and Cody are two of the best, but Westside Christian, they're seven, eight deep with studs,” Brian Morse said. “That's not saying we can't beat them, but we're definitely not a favorite.

“I would definitely not count us out, because by the time the end of the year comes around, all these sophomores and juniors are going to be so much better.”

Cascade Christian's losses have come against 4A No. 6 Philomath, 4A No. 4 Junction City and 5A No. 5 Crater. The Challengers will get a big test Jan. 17 when they meet Westside Christian in the MLK Showcase at Harrisburg.