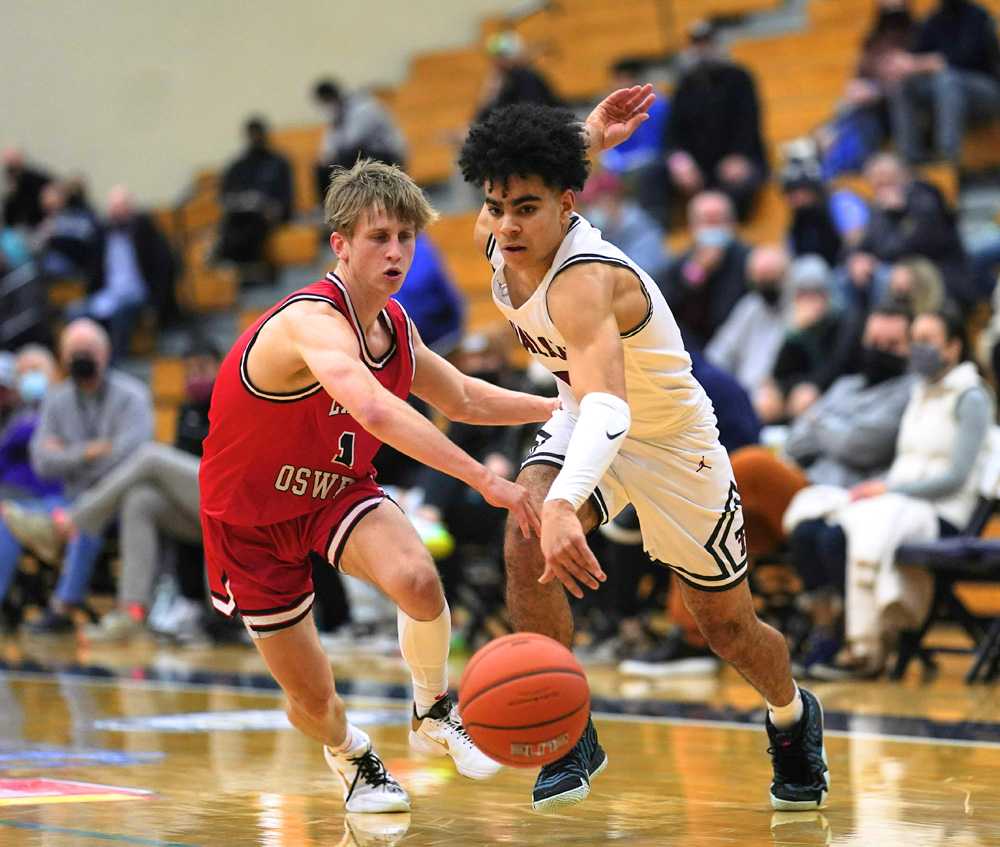 Lake Oswego owned the last second of each quarter; but Tualatin, with its relentless inside-out game, was the better team the rest of the time in a 77-67 quarterfinal win Tuesday night at the 25th Les Schwab Invitational played at Liberty High School in Hillsboro.

Noah Ogoli, fighting foul trouble in the first half, was brilliant in the third quarter as Tualatin, ranked No. 1 in the latest OSAAtoday 6A coaches poll, pulled away from the pesky Lakers. The 6-1 senior guard scored 12 of his game-high 21 points in the third, and assisted on two other baskets, for the Timberwolves, who answered LO’s rally to within 46-44 midway through the quarter with a devastating and decisive 17-4 run.

“I knew I had to get after it in the second half after not playing as much as I wanted to in the first half,” Ogoli said. “We were getting stops on defense, running out in transition and doing what we do and not letting them stop us.”

Lake Oswego, which trailed by as many as 16 points early in the fourth quarter, rallied to get within 10, 66-56, with more than five minutes yet to play but could never get the deficit into single digits. The Lakers had a chance after a steal from Sorena Torabi, but his fast break lay-up try was blocked brilliantly by Ogoli. Jaden Steppe was fouled attempting a transition lay-in on the other end and made a free throw to build Tualatin’s lead back to 12. The Timberwolves played keep away for the final 2:20 of the game and made enough free throws to keep Lake Oswego at bay the rest of the way.

Freshman Winters Grady had 19 points and senior Carson Reno contributed 18 for Lake Oswego, which trailed 17-16 after one, 40-35 at halftime and 63-50 after three quarters. The deficit would have been much larger in each quarter, but for one buzzer beater after another. Reno made a 65 foot bank shot to close the first quarter, Grady knocked down a deep wing three to end the second and scored on a lay up to finish the third quarter. In a game that was already decided, the only question in the last minute was whether LO could do 4-for-4 in buckets at the horn. Sure enough, Reno was able to swish a deep elbow triple as the final second ticked away.

Guards Malik Ross and Josiah Lake complemented Ogoli’s 21 points by scoring 14 and 13, respectively, for Tualatin. Add nine points from reserve Ryan Schleicher and guards 57 of the Timberwolves’ 77 points, which is unusual because Tualatin (8-0) has a potent inside game with the likes of Jaden Steppe, Ashton Rose, Peter Burke and Kellen Hale. The guard quartet also had 11 steals and 19 rebounds.

Tualatin moves into the semifinals opposite Beaverton tomorrow night. Ogoli was confident that his team could handle the Beavers.

“We’ve been playing together, a lot of these guys, since elementary school,” he said. “That chemistry really helps. I expect us to get to the finals and hopefully go against the No. 8 team in the nation. That would be a fine test for us.”

In other quarterfinal action Tuesday from the Schwab:

Barlow 80, Roosevelt 74: -- Freshman Jalen Atkins, sidelined by injury until this tournament, scored 23 points and was huge down the stretch for Barlow in the upset win. Terrence Hill (36 points) shot the Roughriders back into the game in the fourth quarter, but two Atkins free throws and his dish to Nathan Jones for a lay-in gave the Bruins an insurmountable five-point lead with 26 seconds remaining. Jones finished with 17 points, while his brother, senior post Jesse Jones, had a team-high 24 points and 12 rebounds.

Link Academy (Missouri) 70, Jesuit 43 -- Undefeated Link Academy, one of the top 10 teams nationally, did not play its best game – the Lions had 24 turnovers – but its overwhelming size and ball hawking defense were enough to overcome Jesuit. Link outscored the Crusaders, 28-9,in the second quarter to blow open what was a relatively close affair after one. Six Lions scored eight or more points, led by junior guard Jordan Ross. The native Utahan scored a game-high 12 points. Cade Collins and Tyree Blake each had eight for Jesuit, which shot just 27 percent for the game and had only seven assisted baskets.

Beaverton 66, Cleveland 65 – Cleveland rallied from a 40-34 halftime deficit to take a 63-56 lead in the fourth quarter. But the Warriors were outscored 10-2 down the stretch as the Beavers rallied from behind to win for the second straight night. Brady Rice had a huge game for Beaverton, including 21 first half points.