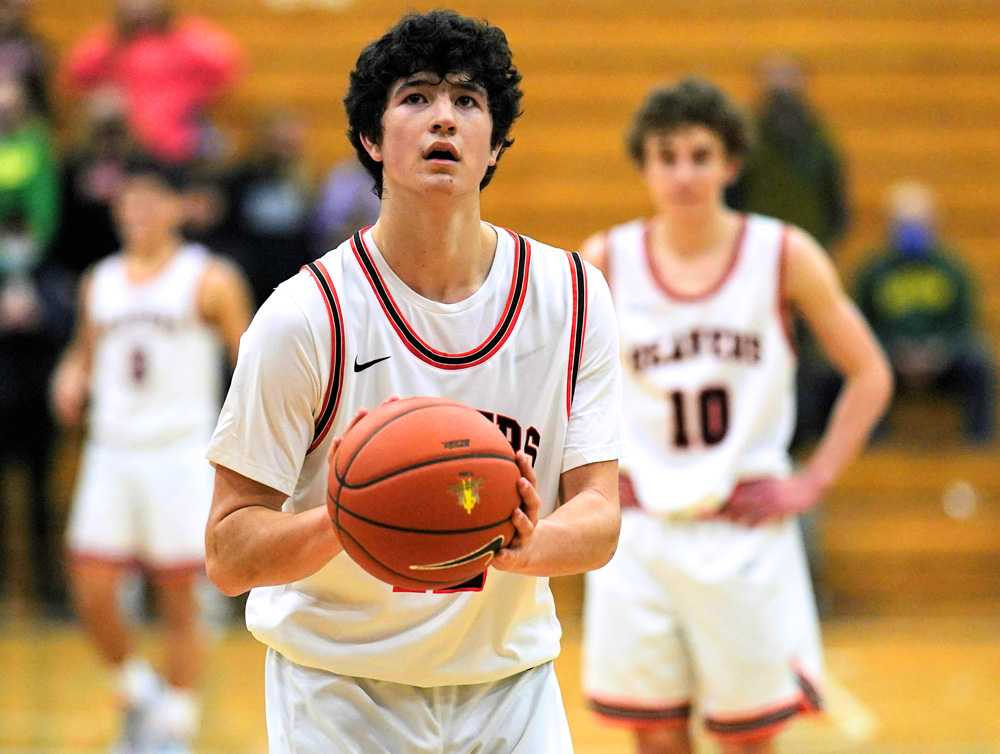 Beaverton rallied from down 11 points with less than four minutes remaining to stun taller and more physical Central Catholic, 54-52, on Monday afternoon in a first-round game at the 25th Les Schwab Invitational played at Liberty High School in Hillsboro.

The winning points came on two free throws by junior Brady Rice, following a controversial foul call with 0.3 seconds remaining. It was the Beavers’ only lead of the second half.

Central Catholic, which led by as many as 16 points in a dominant third-quarter showing, struggled, without a true point guard among its starting five, when Beaverton applied defensive pressure in the fourth quarter.

“Late in the game they threw the ball away and our kids capitalized on it,” said Beaver head coach Andrew Vancil. “We had to have them. Our kids were tired down the stretch but they sold out. They trusted each other and happened to make enough plays late in the game. I give a lot of credit to our kids not giving up down 10-11 points in the fourth quarter. That’s great heart and a lot of character in those kids to come back.”

Central Catholic’s last turnover was the backbreaker. The Rams were playing for the last shot, with the score tied at 52-52, when Beaverton harassed the Rams into an errant pass, which hit the backboard, with the clock winding down. Beaverton corralled the ball and quickly advanced it upcourt to Rice, who drove the lane looking to score the game-winning layup.

His attempt appeared to be blocked cleanly by Central Catholic guard Jordan King, but the senior was called for a foul. It was the last of several fortuitous calls to favor Beaverton in the end game.

“I thought it was a 50-50 bang-bang call,” Vancil said. “I was on the refs all game about the physicality inside. I didn’t think we got a lot of calls, but we happened to get the benefit of the call there.”

Both teams played deliberately in a 21-20 first half that favored Central. The Rams started hot, getting their first five points thanks to outside shooting from freshman guard Isaac Carr. King also scored five in the first quarter, to counter eight first-quarter points in the paint from post Philip Rosenfield.

Both teams got more players involved in the second eight minutes, which saw the lead change hands four times. Anthony Angelo tallied from deep for Central, which also showed off its power inside, getting buckets in the lane from 6-7 Riley Williams and 6-8 Luke Johnson. Rice, scoreless in the first quarter, scored seven points in the second for Beaverton, which also got a nice layup from Kennan Apperson, off of a great pass from Trevon Hamilton; and a deep three from Max Elmgren, which answered Angelo’s triple to tie the game at 19-19.

The third quarter started with King’s steal and score for Central Catholic, which tacked on six more points to build its lead to 29-20. The Rams steadily built their advantage for much of the period, outscoring the Beavers 18-3 before a three-ball from Aiden Rice cut the margin to 13, 39-26 heading into the fourth. Johnson had 10 points in the quarter for Central. He simply could not be stopped when he attacked the rim.

The fourth quarter started with the teams trading baskets. Beaverton got Central’s lead down below 10 points, 46-37, on Hamilton’s lay-in, assisted from Rosenfield, with four minutes to play. Twice thereafter, Central Catholic regained a double digit margin before Beaverton rallied in earnest with just over 180 ticks remaining.

The final push began with an Apperson steal, which denied Central a sure-fire lay-up. It was the first of three consecutive turnovers, which would prove the Rams’ undoing. Beaverton capitalized on Brady Rice’s “And 1” to get within 50-47 and tied the game with less than a minute to go on Brady Rice’s long-range triple, made possible by Hamilton’s circus-like behind-the-back assist.

Johnson, who finished with 22 points for Central, quickly put the Rams back on top with a driving bucket with 43 seconds remaining. Rosenfield got the equalizer 18 seconds later with a lay-up, but missed the free throw that would have completed the three-point play.

Central Catholic then tried to play for the last shot. Beaverton had only four fouls at that point, three shy of putting the Rams in the 1-and-1 bonus. Beaverton took advantage by playing in your face defense that flustered Central Catholic into giving up the ball without a shot and then took further advantage by going to the rim in the last second, getting the foul call and draining the free throws.

Brady Rice finished with 22 points and Rosenfield added 14 for Beaverton, which shot 69 percent from the field in the fourth quarter rally.

King scored 13 to complement Johnson’s 22 for Central, and the Rams shot 57 percent in the second half. But the turnovers and fouls, at inopportune times, cost them.

In other action Monday from the Schwab:

Cleveland 80, David Douglas 53 – Cleveland shook off a determined David Douglas squad with a dominating fourth quarter performance. The Warriors outscored the Scots 33-9 to finish the game and remain unbeaten on the year against in-state opponents. Christian Green had a monster game for the victors, scoring a game-high 23 point and snagging 18 rebounds, more than twice as many as anyone else. Stephen Treat added 15 points for Cleveland, which recorded 11 steals, had five more assists and four fewer turnovers. David Douglas (4-2), a late addition to the field after four teams were forced to drop, was led by Josiah Collins. The senior guard had 22 points, three blocks, three steals and two assists.

Link Academy (Missouri) 80, Tigard 45—Undefeated Link Academy, one of the top 10 teams nationally, doubled up Tigard, 28-14, in the first quarter and cruised to the win. The Lions shot 82 percent from the field over the first eight minutes and finished at 73 percent while putting five players in double figures. Julian Phillips led the way with 20 points, which assisted on 20 of its 34 field goals. Kalim Brown, Malik Brown and Sawyer Wolf combined for 38 of Tigard’s 45 points. The loss was the first for the Tigers after six consecutive wins to start the year.

Barlow 56, Sherwood 51 – Barlow opened up a 33-18 lead at halftime and held off a spirited Sherwood rally to win the nightcap by five. The Bruins won despite shooting just 1-for-10 from behind the arc and 13-for-20 from the free throw line. Brothers Nathan Jones and Jesse Jones combined for 23 points and 13 rebounds in the win. Caden Jenkins scored 13 points and Owen Caudle added 10 in the loss for Sherwood.