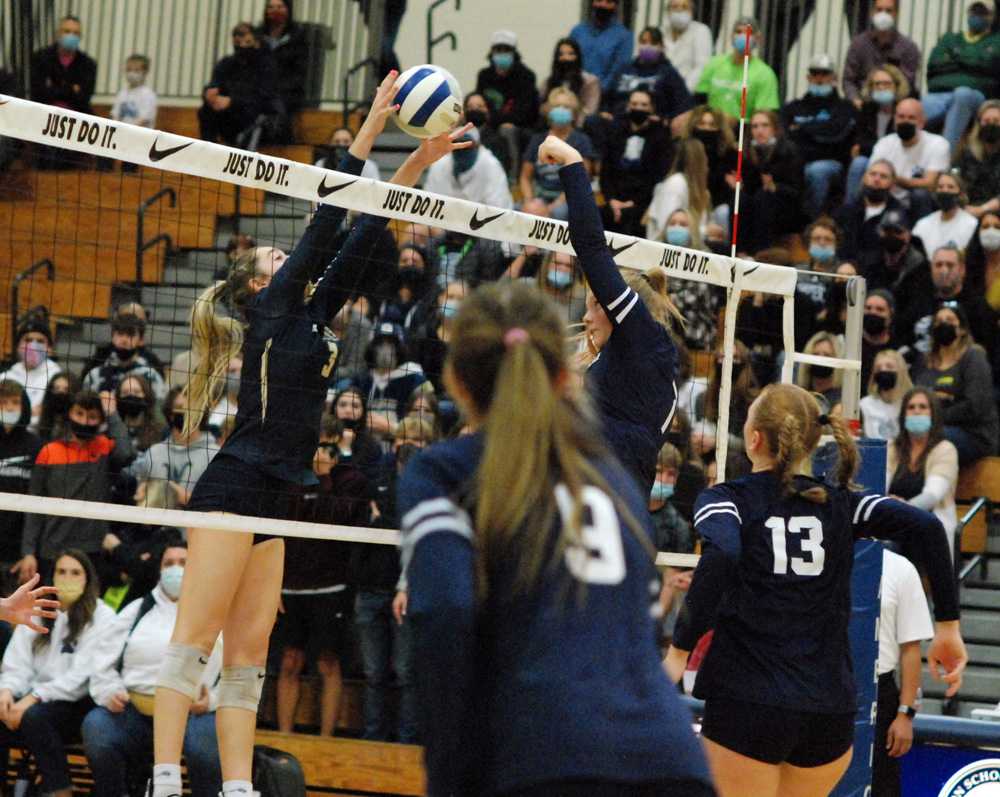 West Albany had no business winning the first set of Saturday afternoon’s 5A volleyball state championship match versus Wilsonville.

The top-seeded Bulldogs were totally outplayed and appeared overcome by nerves. Wilsonville wasn’t just meeting the moment; the Wildcats, led by nine kills from senior OH Ashli Edmiston and smart setting from Makenna Wiepert, were exceeding it. Wilsonville jumped out to a 6-0 lead on the serve of libero Sophia Kleckner. The Wildcats got another Kleckner serving run later in the set and led, 18-12, on Edmiston’s terminal swing.

Somehow, West Albany managed to win the set, 25-22, the key an 11-2 run late fueled by a tenacious block and the serving of setter Sydney Harrington.

“It was probably a really big shock to them that we came back,” noted senior middle Grace Nealy. “We are an extremely resilient team and have come back from point deficits way larger than that.”

“I’ve been in the game a long time and coached under Kelli Becker,” Bulldog coach Megan Wallace explained. “To be able to carry on that level of excellence means a lot to me. To continue to push the program in that direction is everything I could hope for.”

West Albany, by its own admission, was not ready to be a champion at 4 p.m. when the referee whistled first serve. The senior-dominated Bulldogs could not pass serve, the timing was off a tick between Harrington and her hitters and the players on the court looked shell-shocked when Wallace was forced to call time out down 5-0.

“We had a lot of nerves going into that game,” Wallace admitted. “Give Wilsonville credit; they played the game of their lives.”

West Albany began to turn the set around on a solo block from Gracie Boeder with Wilsonville just six points from taking a 1-0 lead. Star hitter Hailey Heider shook off a slow start to record her fourth kill of the match and add one to the Bulldog ledger. The teams then scuffled for a few points until Edmiston’s back row strike put Wilsonville up 21-17, seemingly enough of a cushion to put the set away.

West Albany proved to be too resilient.

“Our word this year has been ‘resiliency.” Wallace explained. “It’s been a point of emphasis in practice, making sure we know how to come from behind if we get in that position.”

A hitting error gave the serve back to West Albany and sent Harrington, the team’s best server, behind the line. By the time she was done, the Bulldogs led 24-21. The 7-0 run featured a big block from the tandem of Nealy and Heider, kills from Brooke Rogers and Tessa Zimmerman and a stupendous dig left back from libero Maddy Hellem. But the backbreakers were authored by Harrington herself: a short serve ace that knotted the set for the first time since 0-0 and the ace serve that followed, which gave West Albany the lead for good. Edmiston found the seam to pull Wilsonville within 24-22 and give the Wildcats a glimmer of home. That glimmer was extinguished, however, when Wilsonville, trying to be aggressive, served long on the second set point.

“I’m not sure how that got away,” Wilsonville head coach Scott Thompson said.

“I don’t know if our heads were in the right space to start off the way we did, but we worked it out,” Heider noted.

Games 2 and 3 featured the best of Heider. She passed serve flawlessly in center back, showed off her full offensive arsenal, averaging six kills per set; and was a massive presence on the block, including a solo stuff early in the second that helped maintain West Albany’s momentum.

Three more Edmiston kills – she finished with a match-high 21 – kept Wilsonville in touch In Game 2, but the Wildcats could not string together any significant point runs until they trailed 21-15 following another Heider kill. West Albany, meanwhile, scored three in a row with the set tied at 11-11, and had a 5-1 run after Wilsonville had fought back to within 14-13. Six missed serves hurt Wilsonville in Game 2, but so, too, did West Albany’s block and the terrific all-around play of Harrington, who not only dished the rock; she blocked and dumped it too!

Wilsonville’s 3-0 run, which started with a Tatum Lubisch kill, pulled the Wildcats within 21-18, but Heider’s tip over the block gave West Albany the serve again and Harrington finished off the set, including an ace that hit a Wildcat standing beyond the baseline. Zimmerman, one of the unsung heroes on this team and one of only two non-senior contributors, completed the set win with a decisive block on the right, one of 11 team blocks in the match for the Bulldogs.

Wilsonville showed a spark to start Game 3. A Lubisch kill and two Kleckner aces put the Wildcats up 5-1. West Albany proved resilient once more and caught Wilsonville at 8-8 following Harrington’s two-handed kill and a superb set to Heider for the putaway. Two terrific kills from sophomore Kendyl Arnett helped keep Wilsonville at arm’s length during the games middle stages and Heider took over late. The Player of the Match for West Albany had eight of her 16 kills in the final set, including a swing from the right side that gave the Bulldogs three championship points.

Edmiston saved one with a strike from the back row. Wilsonville (21-5) had chances to slice into the lead one further in the ensuing, chaotic rally, but a ball set too tight to the net led to an easy block from Nealy and a dog pile…nay, a Bulldog pile, that signified West Albany was the 5A state champions.

“I went up and was hoping to get some hands on the ball,” Nealy explained about that last point. “I pushed it down and she tried to kick it up. I was thinking, ‘Please go down. Please go down.’ And it did. The feeling that came over all of us was relief and joy and excitement because we have worked our butts off all season for this moment and we did it!”

Thompson, in his first year as head coach at Wilsonville after being an assistant coach the previous three seasons, was effusive in praising his Wilsonville team.

“This team’s incredible,” he exclaimed. “Our energy level, intensity and focus was high the entire time. We gutted out a really tough match yesterday [versus Crescent Valley], where we did not play our best, and today we played high level volleyball.”

“So, too, did West Albany,” he continued. “They won the 50-50 balls and scrambled incredibly well; it’s hard to get balls down on them. We knew they were going to play scrappy and they were super scrappy the entire time. They did all of the little things that make winners including winning the blocking game.”

Ridgeview overcame a Game 1 loss to defeat Crescent Valley in four sets for third place. The Ravens also were awarded the Sportsmanship Trophy.

Heider and Edmiston were honored as players of the championship final. They also made the All-Tournament team along with Harrington and Boeder from West Albany, Madi Vaugn from Ridgeview and Crescent Valley freshmen Belle Jacobson and Taelyn Bentley.