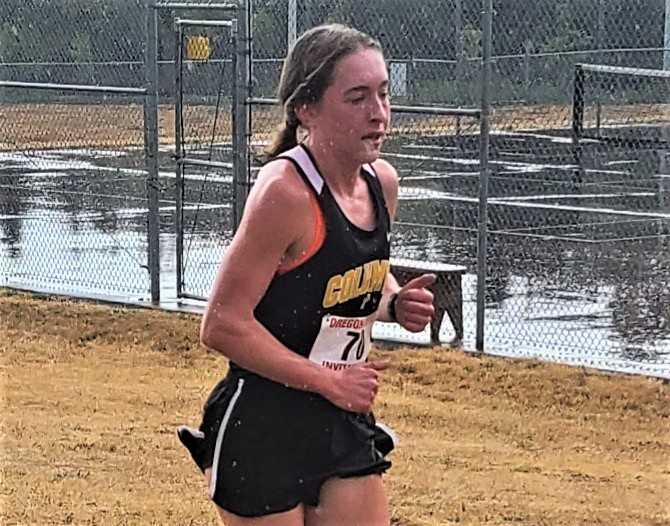 Columbia Christian's Makena Houston won the 3A/2A/1A Showcase meet in April by more than one minute.

“It’s been by design. We’ve been real careful,” Columbia Christian coach Kevin Yaws said. “We don’t like to race a lot because of her heavy training schedule. We are training more towards track than cross country, because that is where we are hoping she peaks.”

“She ran real easy and she wasn’t happy,” Yaws said. “Because we really wanted to see her go under 17-minutes.”

In August, she ran 9:52.8 for 3,000 on the track during a virtual meet, good for the second-fastest time out of all divisions in Oregon last year.

Houston will be competing in the Special District 1 meet on Friday at Sherwood Middle School. Yaws is just hoping she comes out of the district meet healthy and ready for state.

“I just want her to go out and run it and be done with that course and ready for state,” Yaws said. “There are no spikes and bad ground.”

Houston has vastly improved since the last official cross country season in 2019, when she finished 10th at district and failed to qualify for the state meet. Yaws said she was capable of running faster that day, but wasn’t mentally ready.

“It’s just convincing her how fast she really is,” Yaws said. “It was about building confidence and getting her feeling good about her running.”

Houston has improved greatly in the two seasons since, and weather permitting, the 2A course record of 18:20 could go down in Eugene on Nov. 6.

All of the district meets for all classifications will be held on Wednesday through Saturday this week.

A look at other meets last week:

Girls -- Neah-Kah-Nie senior Jordan White picked up the individual victory in 20:01, while sophomore Delaney Draeger led Vernonia to the team title (second in 20:18).