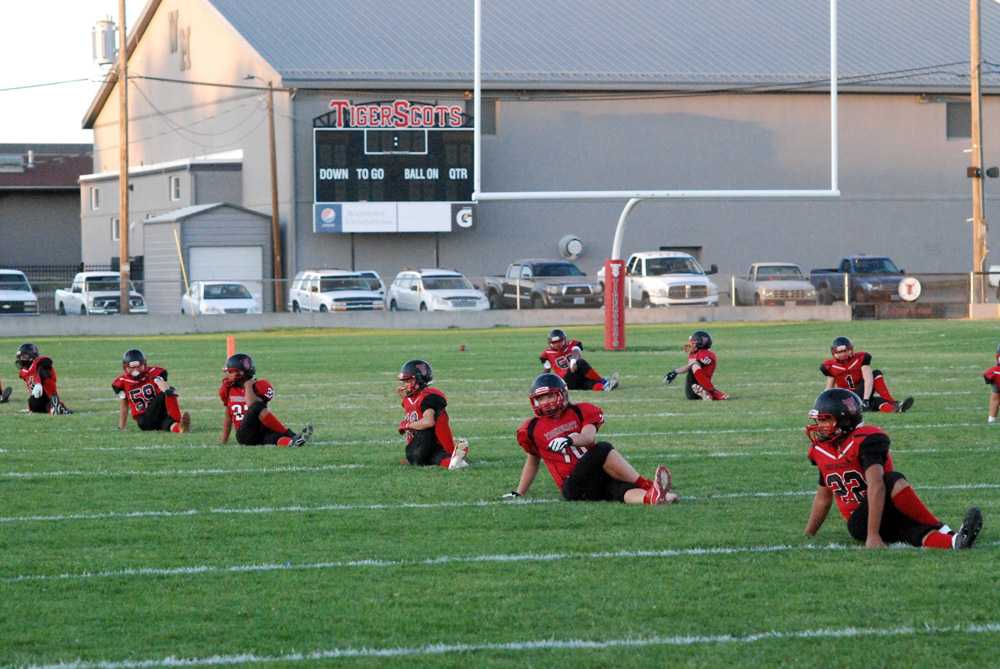 t's not a stretch to say that Weston-McEwen can make the playoffs despite losing to Heppner, 39-0, on Friday night

ATHENA – 2019 2A champion Heppner converted four first-half turnovers into 20 easy points and leaned on a dominating defense to whitewash Weston-McEwen, 39-0, dropping the TigerScots from the ranks of the unbeaten. The win over the No. 4 team in 2A, one week after knocking off No. 2 Kennedy, solidified Heppner’s hold on the top spot in the 2A rankings and extended the Mustangs’ unbeaten streak to 23 straight games.

Heppner forced Weston-McEwen (3-1) into 10 punts and yielded just 51 yards of total offense. The Mustangs shut down the TigerScots’ passing game, thanks to two of the best cornerbacks in the state, Kason Cimmiyotti and Jace Coe; and dominated at the point of attack thanks to strong work from the likes of backers Brock Hisler and Conor Brosnan.

“Give Heppner credit,” said Weston-McEwen coach Kenzie Hansell. “They are well-coached and do a lot of things well. They showed things on defense that we hadn’t seen on film. We never really got our offense rolling tonight.”

Folks started rolling into the school about two hours before game time for the highly-anticipated matchup, which coincided with Weston-McEwen’s homecoming. The line for pulled pork and barbeque beans at the food truck started about that time and stayed steady all through the pre-game.

There was excited chatter from TigerScot fans about whether this would be the year their boys were able to compete with the Heppner dynasty.

Heppner fans, who made the 90-minute drive east on I-84 and then north 19 miles from Pendleton to this wheat farming community near the Washington border, exhibited quiet confidence that their young men, who’d been playing football in the Heppner program since fifth grade, would make this another great Friday night for Mustang fans.

The temperature reached almost 80 degrees on Friday afternoon, this first day of October, but by game time there was a chill in the air. The landscape surrounding the high school consists of rolling hills of wheat, now picked and gone to golden straw. There’s nothing to buffer the wind, certainly not the few buildings from Athena’s two-block Main Street nearby.

Downtown Athena is pretty typical of small, rural towns in Oregon and across America. There’s a library and post office, a one-screen movie theater and a long-since shuttered hotel. There are a few gas pumps attached to a quick stop convenience store. There’s a lounge and a place to get your morning coffee and a few businesses designed to serve the needs of the farmers whose fields define the area.

The field itself also is typical of small schools across the state. It is grass, unlike the artificial turf you find at almost all 6A schools in Oregon, and it is not perfect. The west end zone has a pronounced swale. A large patch of hard dirt, where second base sits during baseball season, also is evident near one of the goal lines. The bleachers are small – so small that folks line the field with lawn chairs like they’re watching a parade – and the old stadium lights are affixed to wooden poles, some far from the field itself. They need to be turned on one by one and cast large shadows in spots that should be illuminated.

Despite all the flaws, it feels amazing to be in this place, experiencing this slice of Americana. It's hard not to be envious of the townsfolk who get to be part of this week to week in the fall…

There are so many American flags during the singing of the Star Spangled Banner that knowing which way to stand is confusing. The town was settled by Scots in the 19th century and those influences remain, down to the bagpipe and drum procession to midfield before the game. Peyton McLouth, who would play with distinction on both sides of the line for the TigerScots, was one of the pipers.

Weston-McEwen won the coin toss and deferred. The White Hat – he’s the lead referee of a crew of six working their second game today; referees are hard to find in this part of the state – signaled that Heppner would receive the kickoff. It is game time.

Hisler, a bruising running back with a downhill style, took the opening kickoff back 55 yards to the Weston-McEwen 30-yard line. The Mustangs were in business!

Except they were not.

Weston-McEwen’s defense bowed its neck and a tackle for loss from senior Brian Day forced a fourth and long, which Heppner did not convert. The home fans went wild.

“We bent a little on the kickoff but didn’t break,” Hansell said.

Unfortunately for Weston-McEwen, the celebration lasted only a few seconds. The TigerScots botched the pitch on their first offensive play. Cimmiyotti scooped up the loose ball at the Weston-McEwen 22-yard line and raced, untouched, to the end zone. The game wasn’t even 150 seconds old and Heppner had the only points it would need on the night.

Weston-McEwen got a first down on its next possession and reached midfield, throwing exclusively, but the drive stalled and resulted in the first of 10 punts. McLouth’s strong work on defense for the TigerScots forced Heppner’s offense into a 3-and-out and the teams traded field position for much of the quarter.

Coe, Heppner’s speedy receiver, returned Weston-McEwen’s second punt of the game 25 yards to set the Mustangs up at their own 37-yard line. Long runs by Hisler and Caden George, with a late hit penalty sandwiched in between, put Heppner into the end zone in just two plays. With four minutes left in the first, the Mustangs led, 12-0.

Heppner had a chance to add on early in the second quarter after runs from Hisler and sophomore QB Landon Mitchell produced first downs but an end around pass from Cimmiyotti to Coe near that dirt patch fell incomplete with Quinntin Graham defending.

After an exchange of punts, Weston-McEwen started to get some offense going. A bruising 13-yard run from Levie Phillips and pass interference call got the TigerScots near midfield. Senior quarterback Blaine Peal tried to keep that momentum going with a quick rocket pass to the right, but George stepped in front of it for an interception and bolted 47 yards untouched for a Heppner score with five minutes to go before halftime.

Weston-McEwen fumbled two plays later. Hisler recovered at the TigerScot 26-yard line. It took just two plays for Heppner to cash in on the turnover, with Hisler’s run up the middle from 20 yards making it 26-0 Mustangs at the half.

The second half was more of the same, with both teams playing soundly on defense and mostly sputtering on offense. Weston-McEwen did get into Heppner territory late in the third quarter thanks to a 23-yard catch and run by Cameron Reich. But Cade Cunningham registered a sack for a 15-yard loss to end the threat.

Heppner, meanwhile, got on the board again in the third quarter thanks to two long receptions from the athletic Cimmiyotti, which set up Hisler’s second touchdown run. The Mustangs capped the scoring early in the fourth quarter when Coe’s 38-yard scoring scamper completed an 88-yard drive and started the running clock.

Heppner (5-0) finished the night with 312 yards of total offense, 249 on the ground. Hisler led the rushing game with 101 yards, while George and Coe each contributed 66. Hisler and Brosnan had six tackles each to lead the defense. Ty Boor, Blaine Mahoney and Cunningham each had five.

Heppner head coach Greg Grant was happy with his defense, which he labeled “solid,” as well as the effort and intensity exhibited on both sides of the ball. But he said that the offensive inconsistencies that have characterized the season remain.

“I might be throwing too much at them,” he admitted. “Maybe we’re thinking too much at times, because I think we’re this far away from being pretty dangerous offensively. You see flashes. Every time it looked like we were going to do something we found a way not to. I don’t know how many penalties and mental errors we made. I’m hoping some of the lessons we learn from this can help us down the road.”

Weston-McEwen coach Hansell lauded his defense after the game

“Our defense was outstanding, but it was on the field too long tonight,” he explained. “The guys flew around and made plays but it’s hard for a defense that was out there 70 percent of the game and had the end zone right behind them as well.”

Hansell added that the season’s goal – to make the playoffs for just the second time over the past nine years – remained intact despite the loss.

“That’s the message to the team,” he said. “We played a team that is well coached and the No. 1 team in the state. That’s a good team but so are we. There are things we can do better. We are excited to get after it and continue our goals for the season.”