Football: Tualatin's Ross starts fast, finishes off Silverton
Tweet
Senior Malik Ross sets the tone with a kickoff return, saves the day on defense as the Timberwolves turn back the Foxes 35-28
September 11, 2021 by Jerry Ulmer, OSAAtoday 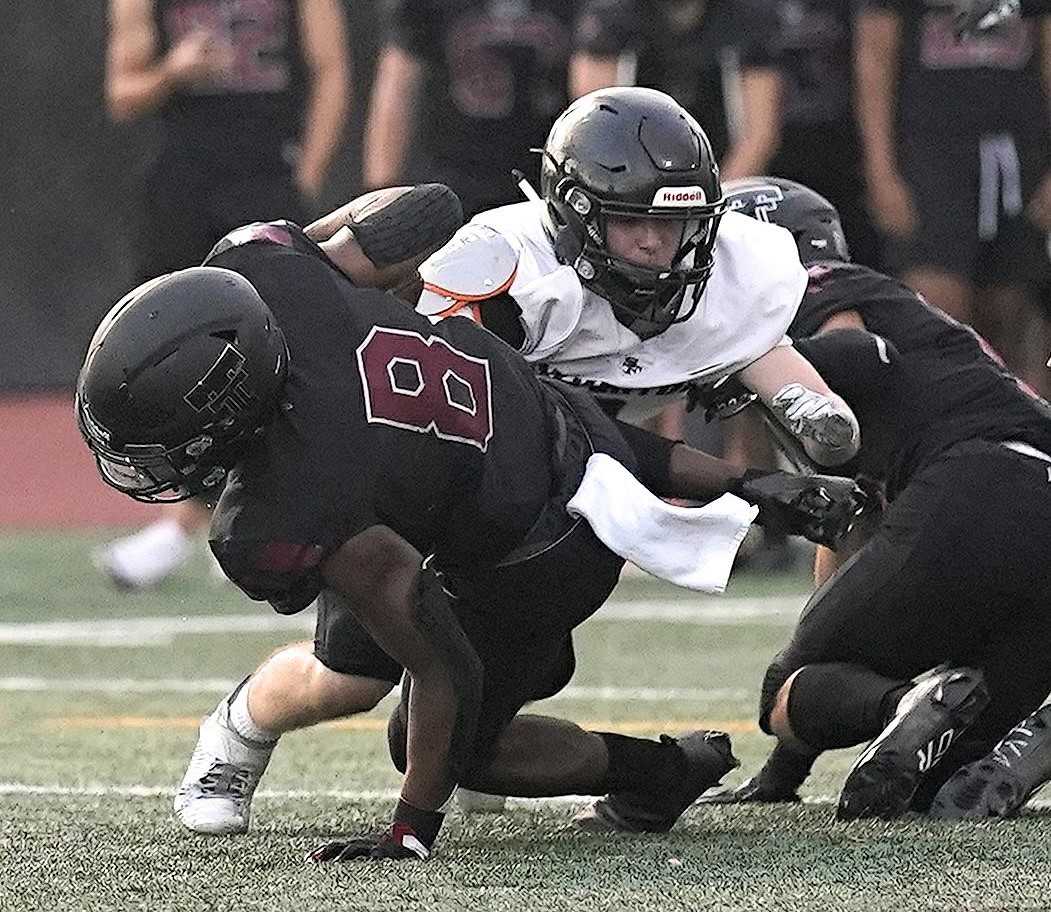 TUALATIN – The way things started, Malik Ross should have known it was going to be his night.

The Tualatin senior returned the opening kickoff 86 yards for a touchdown and provided the clincher with a game-saving interception with 30 seconds left, propelling the Timberwolves past visiting Silverton 35-28 in a nonleague football game Friday night.

The 6-foot, 190-pound Ross also scored what turned out to be the game-winning touchdown on a 63-yard run in the fourth quarter, finishing with 130 rushing yards on 14 carries. His performance enabled the Timberwolves (2-0), ranked No. 4 in 6A, to overcome a dramatic rally by the Foxes (1-1), No. 4 in 5A.

“Malik is a dude. He's the best player on our team,” Tualatin senior receiver Cole Prusia said. “I believe that day in and day out, he's the backbone of our team, and I love that dude with all my life.”

When the Foxes rallied from a 21-0 halftime deficit behind senior quarterback Jordan McCarty to breathe down the Timberwolves' necks in the fourth quarter, Ross was there to save them.

“I try to encourage my team throughout that stretch because we never want to get too low,” Ross said. “Me doing what I can do, show up in the clutch, just that clutch gene that I have. … Me being one of the leaders on our team, I've got to make clutch plays.”

Ross' most important play came in the final minute. Silverton trailed 35-28 and had first-and-goal at the Tualatin 9-yard line with 35 seconds left, but Ross made a diving interception over the middle at the 1-yard line, turning away the surging Foxes.

“I think I'm really good at reading the quarterback's eyes,” Ross said. “Before the play, he kind of looked over real quick, and saw I was on the other side. I noticed that, and I ran over as fast as I could, and I was just there.

“He threw it a little low, and I bent down. Shoot, I didn't care where he threw it, I was going to dive for it. I thought they were going to rule it incomplete. I felt like it was a couple inches off the ground. I knew I had it.”

The Timberwolves have become accustomed to that type of play from Ross.

“That's my guy. That dude is crazy,” senior receiver Peter Burke said. “No one can guard him in the state. He's unreal. He won the game for us.”

The Foxes nearly came all the way back behind McCarty, who completed 19 of 40 passes for 353 yards and two touchdowns and had 16 carries for 64 yards and one score, but fell one play short. What did McCarty see on his last pass?

“Not No. 8,” McCarty said of Ross. “I saw their safety was a little outside shade, so I thought the slant would be there. No. 8 made a good play on it. I didn't see him until the last second.”

Ross showed his anticipation and athleticism with the interception, but flashed his speed on the opening kickoff, finding an opening on the right sideline and blitzing past the Foxes to the end zone.

“I was fired up,” Ross said. “I've got some family here that haven't watched me as much, so I'm glad I got to start it off that way for them.”

The Timberwolves celebrated the win but were concerned over the status of senior quarterback Jackson Jones, who left early in the third quarter with an injury. His throwing shoulder was examined after the game.

“Losing our starting quarterback after the first half, that really slowed us down,” Prusia said. “We're an offense-first team. We have so many weapons on offense, and losing him to throw the rock and hand that ball off, it was definitely devastating.”

Jones went 8 of 15 for 131 yards and two touchdowns – six yards to Burke and 16 yards to Prusia – before leaving. Junior Jack Wagner replaced Jones and ran for a 49-yard touchdown on a read-option play to give Tualatin a 27-7 lead midway through the third quarter.

Silverton wouldn't go away, however. McCarty threw touchdown passes of 16 yards to senior Vandon Fessler and 42 yards to junior Jackson Pfeifer to pull the Foxes within 27-21 with 7:15 left in the game.

Silverton needed only three plays and a pass-interference penalty to get to the Tualatin 9 before its momentum crashed with Ross' interception.

It was a tough loss for the Foxes, but it showed that they are capable of playing with what many believe is a 6A title contender.

“They're a really tough team,” McCarty said. “We got down early, so it really showed who we are when we battled back. We know what we can do and what we can accomplish.”

Burke tipped his cap to McCarty.

“I used to play basketball with him, and he's a great athlete,” Burke said. “He puts the ball perfectly in spots. He can run. He was causing trouble for us all night.”

Pfeifer not only caught a touchdown pass but had 20 carries for 120 yards, including a 39-yard score. Fessler caught 10 passes for 174 yards and one touchdown.

The loss didn't seem to faze the Foxes, who opened the season with a 41-7 win over 6A Grant.

“We're winning the state,” Pfeifer said. “This shows our potential. But we know we can do better.”