Girls cross country: 'Sky is the limit' for rising Wells team
Tweet
Buoyed by an outstanding spring season, the Guardians look to be serious contenders in 6A
August 19, 2021 by Jerry Ulmer, OSAAtoday 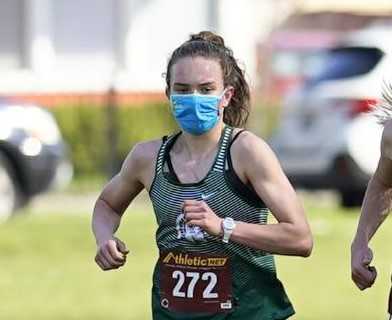 Wells senior Charlotte Richman set school records in the 1,500 and 3,000 this year. (Photo by Jon Olson)

Wells has come within an eyelash of a state trophy in girls cross country in recent years, six times finishing between fifth and eighth at the OSAA championships since 2013.

Now the Guardians, formerly known as the Wilson Trojans, believe their time has come to join the front pack.

They are riding a wave of momentum from the spring, when they won the district title in the tough 6A Portland Interscholastic League and capped the season with a first-place performance in the Rose City Championships Invite.

“I think the sky is the limit from a potential standpoint,” coach Thor Esbensen said. “We're returning quite a squad from last year.”

Wells brings back four of its top five finishers from Rose City, including the meet champion in senior Charlotte Richman.

“Her confidence is just rock steady,” Esbensen said. “She's just a gamer. I think it really kind of lit a flame under her, the excitement about running, and just kind of the possibilities she has in that realm.”

The 5-foot-5 Richman is the starting point guard on the school's basketball team and spent much of her summer playing on the AAU circuit. But she is in “top shape,” according to Esbensen.

“She really looks sharp,” he said. “Basketball is definitely her first love, but she took to running during that junior year with the success she had. She really kind of enjoyed that different type of challenge. That raw effort was really kind of addictive for her.”

Other top runners returning for Wells are sophomore Josie Fale, junior Petra Schuster and sophomore Lily Roller. Fale has the No. 8 time among returning runners in 6A; Schuster and Roller are 27th and 29th, respectively.

Fale, who placed seventh in the 3,000 at the season-ending 6A track meet, balanced her summer workouts with soccer commitments. She competed in both sports last season and plans to do so again this fall.

“We have to spend a lot of time monitoring her efforts,” Esbensen said. “Same thing with Charlotte. She was on an AAU basketball team during the season last year. We've just got to make sure to keep them happy and healthy.”

Fale showed her strength at the Steens Mountain Running Camp last month when she finished first out of 61 runners in an uphill 5,000 race, winning by more than 50 seconds.

“She ran out of her mind. She's tough as nails,” Esbensen said. “There was a little bit of confidence loss in her transition to high school, but she's got her mojo back. We're optimistic that she's ready to go.”

Schuster could be ready for a breakout season. Esbensen said that she “made great strides” during the track season, which she finished by placing 14th in the 3,000 at the 6A meet.

“She really turned it on,” he said. “We're excited to see what she can do.”

Wells will get tested in the PIL by Lincoln and Franklin, who are led by seniors Kendall York and Kaiya Robertson, respectively. The Guardians will get an early look at both teams at the Wilsonville Night Meet on Aug. 27 and the PIL Preview on Sept. 8 at Lents Park.

“It's going to be tough,” Esbensen said of the PIL. “Franklin is bringing in some pretty good girls, and Lincoln is going to be rounding into peak form. I'm confident with our girls coming back as defending champs that we look good. But we're going to have to be firing on all cylinders. The PIL is quite a league.”

Outside of the PIL, perennial powerhouses Summit and Jesuit are daunting obstacles in 6A.

“There are some really strong teams out there, but we're hoping to throw our hat in the mix,” Esbensen said.