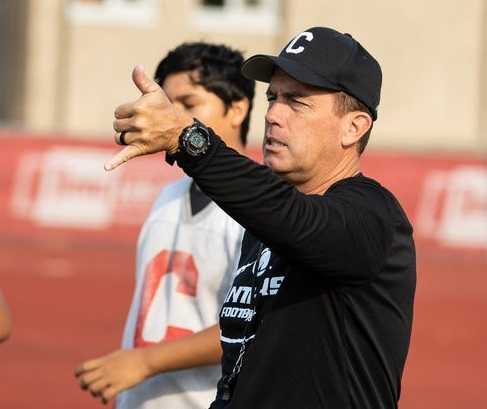 A friendly lunch with a colleague has turned into a major life change for football coach Shane Hedrick.

Hedrick, who coached Central to 15 playoff appearances in 19 seasons before taking over at Willamina in 2019, has been hired as the coach at Oregon City. He will replace Dustin Janz, who resigned.

“He said, 'Hey, I heard you were in the area, come over and see me,'” Hedrick said of Jones. “He lured me over there and showed me the facility. I met with six coaches that were on the staff, and I just right away saw this thing as a gold mine.

“They did a really good job of selling everything, the potential. I drove home and thought about it.”

Hedrick agreed to accept Oregon City's offer July 15. He said he previously believed he would retire at Willamina, but the opportunity at 6A Oregon City – which has one of the state's largest enrollments, a relatively new school building and an expansive venue in Pioneer Memorial Stadium – was too good to pass up.

In 35 seasons of coaching in the state, Hedrick had never seen Oregon City's stadium.

“That facility is really unbelievable,” he said

Hedrick called Lake Oswego coach Steve Coury, a longtime friend, to get his thoughts about the Oregon City job.

“Steve just said, 'Hey man, this thing is a sleeping giant over there,'” Hedrick said. “A little bit of tweaking, not much, this thing could be really exciting to see. So I'm excited about the future.”

Oregon City was in a pinch as it searched to replace Janz.

“We had a couple people who we thought were going to work out who didn't work out,” Jones said. “I called Brigham and he said, 'Hey, what about Shane Hedrick?' And I said, 'Man, Shane would be awesome.'”

“I feel very fortunate that we were able to get him in, and make contact, whether it was by chance, or whatever the case may be,” Jones said. “We had fate working for us that day.”

A 1982 Central graduate, Hedrick expected to step away from the game when he resigned as the team's coach, but ultimately agreed to take the job at 3A Willamina. He went 0-9 and 2-3 the last two seasons.

“I will be forever grateful for the kids there. It was really difficult to say goodbye to them. This year we got some things turned around, won the last two games.”

Oregon City has a history of success, but has struggled in the last three seasons since moving from the Mt. Hood Conference to the rugged Three Rivers League.

After finishing 7-4 and making the second round of the 6A playoffs in Janz's first season in 2017, the Pioneers have gone 7-19 overall, 1-15 in league the last three years. They went 0-5 last season, all league losses.

“Looking at that program I thought, 'OK, they've had a little bad luck,'” Hedrick said. “I don't know what it was. But I'm looking at the culture that he created and I said, 'This is exactly what you would want to take over.'”

Hedrick will make a one-hour commute from his home in Independence to Oregon City, about twice as long as his daily trips to Willamina. By teaching an early-bird weight training class, though, he looks to avoid morning rush hour traffic.

The long drive was one of the trade-offs for the job.

“It took me a couple nights to sleep on this Oregon City thing,” he said. “It's something that kind of caught me off-guard. But I'm incredibly excited.”

Hedrick is eager for the challenge in the Three Rivers, which includes Oregon City's longtime rival in perennial state powerhouse West Linn.

“We're not going to bow to anybody,” Hedrick said. “And when we do play those big games, we're going to rise to the occasion. The biggest compliment I could get as a coach is if you would look at the kids at Oregon City and say, 'That reminds me of a Boise State kind of team. They're blue-collar. They're going to show up and go to work.'”

Oregon City will welcome a massive freshman class of about 600 this year, including 65 who are signed up for football. Of the roughly 70 players that have participated in workouts this week, Hedrick said more than half are freshmen.

Jones said he told Hedrick that he “could do wonders here.”

“Our kids seem to be very excited,” Jones said. “Our assistant coaches are excited.”

Much of the previous coaching staff will return intact, including defensive coordinator Bryan Blix, whom Hedrick called “a firecracker.” Hedrick is hoping to bring aboard his son Grant – a former all-state quarterback at Central who played in college at Boise State (2011-14) – provided Oregon City can find him a spot.

“That would be gigantic for us because Grant could bring a lot to the table,” Shane said.