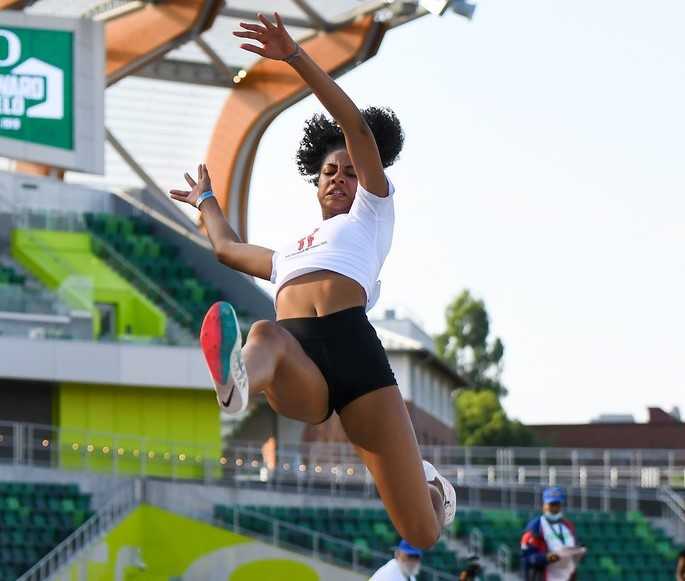 Sophia Beckmon long-jumped 19-10 1/4 on her last attempt at The Outdoor Nationals. (Photo by Becky Holbrook/DyeStat)

As she stood on the runway preparing for her final long jump of The Outdoor Nationals at Hayward Field on July 3, emotion roiled up inside Oregon City's Sophia Beckmon.

Beckmon, who capped a brilliant sophomore season with a title in the 6A Showcase in May, was shooting for a top-six finish at the national-caliber meet. When the previous jumper pushed her back to seventh place, she knew everything rode on her last attempt.

“As soon as I stepped on the runway, that was like the angriest I've ever ran in my entire life,” Beckmon said. “I got the clap going, and I sprinted as fast as I could down that runway, and just jumped it, and hoped I went far enough.”

Beckmon's mark of 19 feet, 10 ¼ inches not only was good enough to win the event, but also set a state record. The previous mark of 19-10 (Michelle Reynolds, Churchill) had stood since 1987.

“The state record wasn't really in my mind, I just wanted to make the podium,” Beckmon said. “Since my goal was to get into the top six, I wasn't really planning on winning it. I knew the other girls were jumping 20s, 21s, really unbelievable numbers. Especially because some of them were seniors, I didn't think it was going to be possible.”

Her record-breaking jump was a thrill for Oregon City coach Kristin Mull, who brought a contingent of athletes to the meet.

Beckmon adjusted her mark on the take-off board before her last jump.

“Because I knew I was going to run fast, I actually moved it back,” she said. “My coach (DeShawn McKenzie) told me to move it up, because I was a little far behind the board. I got on the runway and I was like, 'Um, that's not going to work, I'm going to scratch if I move it up right now.' So I moved it back, and I didn't tell my coach. But he knows now.”

The opportunity to compete at the new Hayward Field was valuable experience for Beckmon, who also ran in the 200 and the 4x400 at the meet.

After missing her freshman high school season due to the COVID-19 crisis, the 5-foot-11 Beckmon has exploded onto the scene this year.

Beckmon is ranked 18th in the nation among high school long-jumpers. Of those above her, all but two are seniors and juniors.

“She just loves track,” Mull said of Beckmon, who does not compete in other sports. “It's just cool that that's her thing. You can see the kind of twinkle in her eye that she has for the long jump.”

Beckmon is undefeated in the long jump this year, extending her winning streak last weekend by finishing first in the age 15-16 division of the West Coast AAU Junior Olympics in North Las Vegas. Her winning mark was 19-4 ½.

“I was glad I won, but it wasn't my best performance,” said Beckmon, who competed for The Inner Circle Track Club at the meet. “On my last one, I was two feet over the board because I was running so fast. I know I could've done better because I scratched a really big jump. I was a couple inches over the board.”

Beckmon is looking to punctuate her breakthrough season with a strong performance in the AAU Junior Olympic Nationals, set for July 30-Aug. 7 in Houston, Texas. It's her last chance to meet a personal goal for this year.

The future is brilliant for Beckmon, who is starting to hear from colleges. By the time she is finished, she could put a stranglehold on the state record.

Beckmon wasn't the only Oregon girl to win a title in The Outdoor Nationals at Hayward Field.

Kohana Nakato, who graduated from Summit this year, won the javelin with a throw of 169-1, the No. 3 mark in the nation this year and No. 4 all-time in Oregon. It blew away her previous personal best of 157-1, which she set last fall.

Nakato began throwing the javelin as a sophomore, when she threw 135-10 and finished second in the 6A meet. She won the 6A Showcase meet this year.

“I didn’t want to set a ton of goals,” Nakato told the Bend Bulletin. “I did want to perform at my best and stay relaxed, but I also didn’t want all my work to go to waste. I just wanted to focus on having fun and throwing it as well as I could.”

Next up for Nakato is a college career at Oregon.

“They have a great program and a great school,” she told the Bulletin. “U of O was always one of my top schools because I’ve heard great things and the track program is amazing.”

The Outdoor Nationals also provided a glimpse of the future for Oregon high school track.

Josiah Tostenson, who will be a freshman at Crater this year, set a national middle school record in the mile with a time of 4:23.98. The previous record of 4:24 was set by David O'Connor of New York in 1974.

“It was a bunch of emotions going through my head,” Tostenson told the Medford Mail-Tribune. “My coach, he told me that it was possible that I could do it, but I wasn’t thinking that I could do it. So when I heard that I broke (the record), it was crazy.”

He is the brother of Jantz Tostenson, who won a 5A title in the 1,500 for Crater and now competes for Georgetown University. His sister, Gracie, ran at Crater and Boise State.