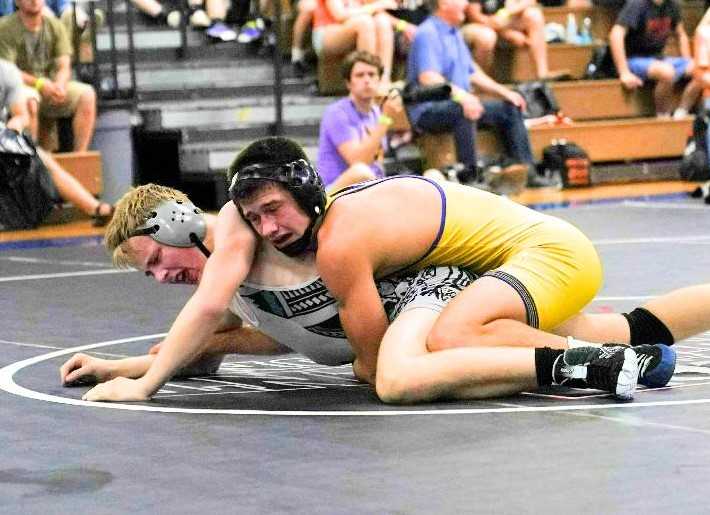 Newberg's Charlie Evans (right), against Century's Will Musser, was one of five Tiger champions. (Photo by Jon Olson)

Newberg put the final touch on one of the most dominant seasons ever by a big-school wrestling team Saturday by running away with first place in the 6A culminating week tournament.

“It was a blast. I wouldn't trade this team for the world,” Olmstead said.

Said Evans: “It really did feel good to be in the home gym, in front of all the fans. It was cool.”

Newberg coach Neil Russo, who has led the Tigers to two of their 12 state championships, again asserted that this team is historically good.

“We can debate whether this is the best 14 we've ever had, but there is no question that this is the best 28 we've ever had,” Russo said. “We've got kids in the room that we couldn't get into our lineup that I'm confident would have scored, and maybe even placed, here at state. It truly is an individual sport that's been turned into a team sport here at Newberg High School.”

“Definitely, I felt pressure,” Garver said. “And I think I'll feel it again. I have a very strong goal to be a four-time state champion.”

Evans bumped up three weight classes after taking the title at 132 last year.

Olmstead won a title at 106 as a freshman but fell in the 120 semifinals as a sophomore.

“It motivated me quite a bit, going from being at the top of the podium to the bottom of the podium,” Olmstead said. “It felt pretty bad, and I knew I didn't want to be there again.”

The short season presented many challenges for wrestlers, though.

“It was kind of weird,” Nash Singleton said. “I felt like it affected our team because we normally get 35 or more matches. We had a couple guys make little mistakes here that we normally would have fixed by now.”

McMinnville senior heavyweight Jacob Barnes beat Century senior Broderick Reese 1-0 for the title, avenging a finals loss to Reese last year. Barnes entered the last two state tournaments as the top seed but fell in the semifinals in 2019 and in the final in 2020.

Russo said staging the event at Newberg was “stressful,” but well worth it.

“Fortunately, I had people here that were unbelievable,” Russo said. “This wrestling community came together and they put on an event for kids that I don't think anyone will ever forget.”

Rowley won 3-2 in the final over Thurston senior Asher Ruchti, who won a 3A title at Pleasant Hill as a sophomore and a 5A title for the Colts last year.

Sweet Home, runner-up to La Grande in the 4A tournament last year, turned the tables on the Tigers to win the 4A culminating week tournament Saturday at Cascade.

Stayton junior Mauro Michel, who won state titles for Cascade in his first two seasons, completed an 18-0 season by pinning Banks junior Dylan Smith in the first round of the 126 final.

Harrisburg senior Chandler Strauss, a state champion the last two years, finished the season with a 19-0 record by winning at 195. Amity senior Blake Runion, last year's champion at 113, took the title at 120.

Culver, which has won 12 small-school state championships since 2007, earned 2A/1A bragging rights by lapping the field in the culminating week tournament at Sweet Home.

The Bulldogs, runners-up to Reedsport by 3.5 points last year, scored 231.5 points to run away from Pine Eagle (94), Central Linn (89) and Coquille (76). Senior Anthony Hood (152) was the lone champion for Culver, which had five runners-up.