Baseball: Brookings-Harbor is 3A perfection
Tweet
Bruins use six-run rally and dominant pitching to down Yamhill-Carlton in meeting of first-time finalists
May 25, 2021 by John Tawa, OSAAtoday 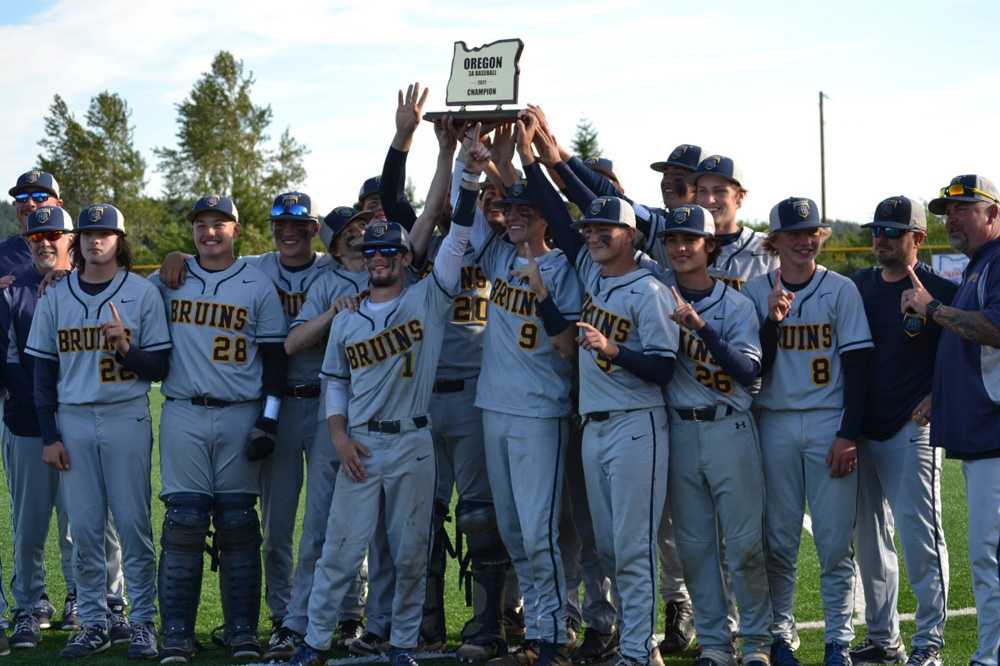 In 16 games, Brookings outscored its opponents 168-22. It's no wonder the unbeaten Bruins won the 3A title on Saturday.

Brookings-Harbor scored six runs in the bottom of the third inning to take a 6-2 lead, then added five more over the next three innings to run away from Yamhill-Carlton, 11-2, in the 3A championship game played Saturday at Santiam Christian. The title was the first ever for the Bruins and capped an undefeated season at 16-0.

“There’s a reason Brookings is undefeated and was ranked No. 1,” said YC coach Brennon Mossholder, whose team finished 15-3. “They are far and away the best team we saw all year.”

Brookings had been building toward this moment for several years. The Bruins were good for most of the 1990s, then went through some down years at the turn of the century. The team experienced a resurgence under head coach Keith Wallin, an alumnus. Success begat community support and community, which begat more success.

“We’re right on the California border and there’s nothing for 100 miles to the east,” Wallin explained. “We’re not brining transfers to the table, so we have to play with what we have.”

This year’s Bruin team featured five seniors, four of whom were starters as freshmen. That core group helped lay the foundation for this season. In 2019, when they were sophomores, B-H went 26-3, losing only to 4A champion Banks, tough Hidden Valley and to a strong Warrenton team in the state quarterfinals.

“It was great to see how close we were,” Wallin said, “but we also saw what was needed to make that next step.”

The Covid-canceled season – 2020 – was supposed to be Brookings’ year. The Bruins had a big, strong, lefty senior pitcher who also was a big RBI bat. They had two other experienced seniors holding down two-thirds of the outfield.

“We thought they were going to lead a real deep junior class,” Wallin said. “We thought we had a good club.”

When the season got canceled, Wallin said the seniors were disappointed but they never let emotions take over. This helped keep the juniors even-keeled through all of the uncertainty surrounding the current season.

“They just waited for their time to get back on the field,” Wallin said. “They’d played baseball their entire lives. They just needed to stay ready.”

The Far West League made the decision that its teams would play a 15-game regular season, three games each against the other five teams in the league. That suited Wallin just fine, as the league had a pretty good history of winning games in the playoffs.

Displaying sound pitching, outstanding defense and timely hitting, B-H started off hot and stayed that way. Through 13 games, only once did an opponent come within five runs.

A regular-season ending double header with Sutherlin had to be canceled because of Covid contact tracing in the Bulldog program. Brookings called around to pick up a game or two for the end of the fifth week, but no one was willing or available. The team started to worry that it would not be sharp when the playoffs were set to begin the following Wednesday, but hoped its Monday matchup with 5A North Bend would provide ample preparation.

Then came another wrinkle. The start of the 3A playoffs was pushed up a day to Tuesday, forcing Wallin to cancel the game with North Bend. That meant Brookings would go into the playoffs without having played in a week!

“We had to get creative with how we stayed ready,” Wallin said. “We threw bullpens and took live swings we didn’t expect we would have to.”

Brookings leaned heavily on its pitching and defense to get by Scio, 2-1, in the quarterfinals; and Joseph/ Enterprise / Wallowa / Elgin, 3-0, in the semifinals. Senior Adam Shew, a USF signee, won the Tuesday game; junior Jason DeShon tossed the shutout in Saturday’s first game. He finished the season allowing just one earned run.

Wallin handed the ball Saturday evening to senior Andrew Burger. He entered the game with a 1.88 ERA.

“To have three guys who can throw at any given moment was absolutely the catalyst for us,” Wallin said.

Burger threw well for Brookings to start the championship game, but left some balls over the plate. Yamhill-Carlton took advantage to score two runs in the first three innings. It could have been so much more, however. Twice, the Tigers had second and third with less than two out and couldn’t push additional runs across. Brookings turned a nifty double play to get out of one jam, then turned to Shew in relief to strike out the side to extricate the Bruins from another.

“I’ve never seen a team coming out of an inning giving up a run so fired up,” Wallin said.

“If we were going to win the game need to capitalize,” Mossholder said. “We didn’t help ourselves, but they were just better”

Because of pitch count limitations, YC had to turn to its No. 2 pitcher early in the game and he struggled with control. Brookings got some timely hits, walked a lot and took advantage of YC miscues to put six on the board in the bottom of the third. With Shew on the mound – 1.07 ERA and five earned runs all season -- the game was effectively over.

“Their ace so much more velocity than we’d seen all year,” Mossholder said. “He struck out 11 in five innings and they made the plays behind him when they had to.”

“Leading 6-2 with our guy in the mound, we felt really strong,” Wallin said. “At that point our offensive philosophy was to scratch one run out an inning. That would make us very hard to catch, because our defense this year was phenomenal."

Shew and DeShon, two players in the heart of the lineup, combined for four hits and three RBIs in the win, but the key was the bottom of the Brookings lineup. They had hits and showed extreme patience, running up pitch counts and getting walks to churn the lineup and get to the bullpen early.

When the final out was recorded, clinching the title for Brookings and sealing YC’s fate, Mossholder gathered his Yamhill-Carlton team around him. He told them that nothing would take away the pain of the moment, but that, hopefully time would bring healing and the realization of what they accomplished.

“It’s the first time YC ever made the championship game, “ Mossholder said. “It’s pretty special what we were able to accomplish this year.”

Mossholder is leaving the team at the end of the school year to be a head football coach at Hillcrest in Idaho, but said that with only four seniors on the squad and many First Team All-League players returning, there’s no reason the Tigers can’t be in the mix for a state title in 2022.

Wallin has two young daughters. He’s resigned himself to the notion that he’s going to be a “girl daddy” for life. That’s okay, he reasoned, because he has 25 sons from February to July.

Twelve played on the varsity team, including those five seniors who made such a big impact, including Jake McCollum, who hit .643 on the year; and a couple of sophomores who had great seasons, perhaps a year ahead of schedule. That took the Bruins from a very good team to an exceptional one, one that went from expecting to win to one that couldn’t lose.

“You hope you’re tough and the pitching is ready, but at end of day you don’t know until you show up,” Wallin said.

Brookings-Harbor showed up, and showed what a 3A champion looks like.