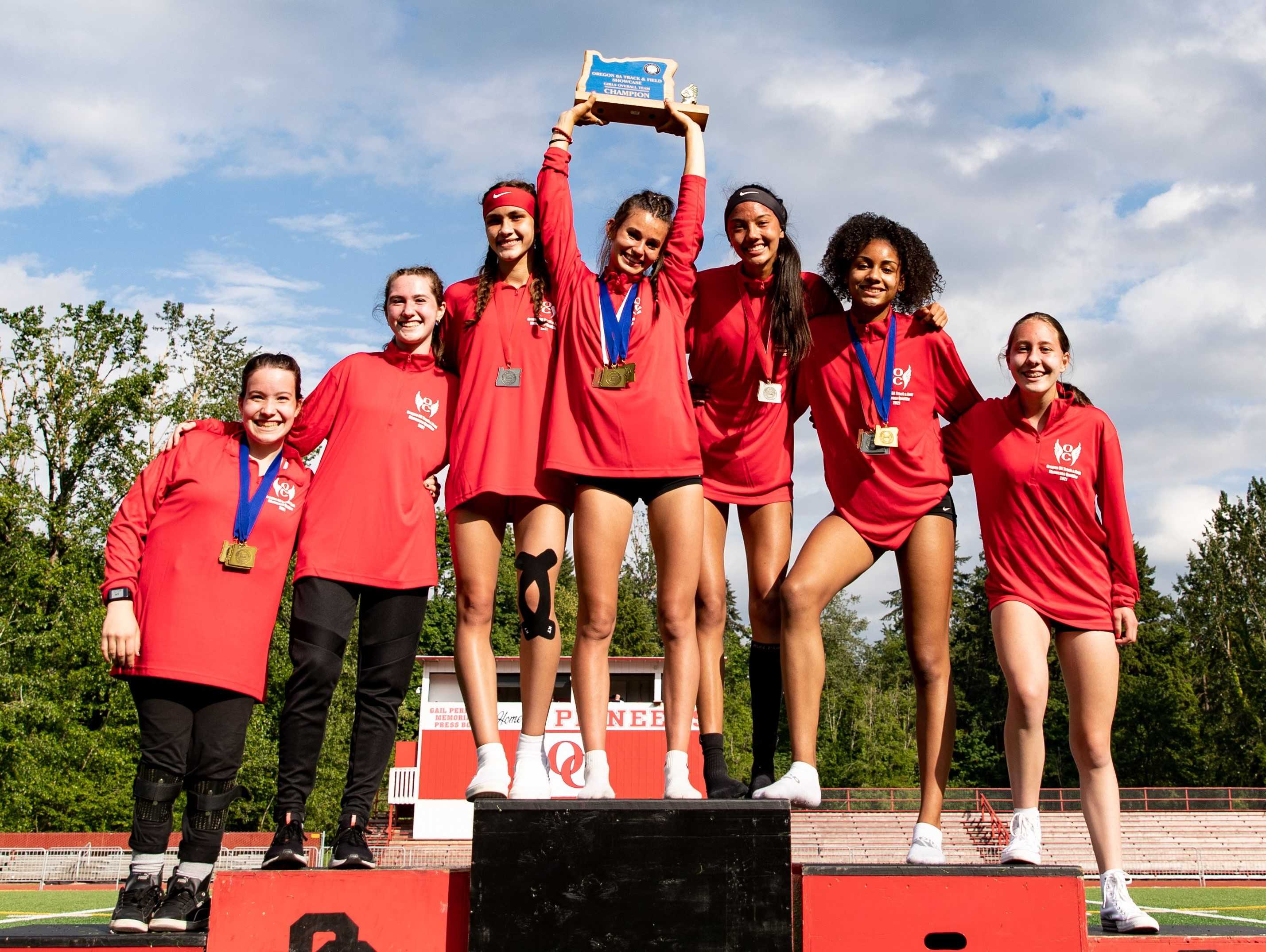 Oregon City's girls held off Summit 90-79 for first place in the 6A Showcase. (Photo by Howard Lao)

It wasn't Hayward Field, and it wasn't an official state meet, but the Oregon 6A Track and Field Showcase at Oregon City's Pioneer Memorial Stadium on Friday and Saturday packed all the emotion and meaning of a state championship.

For Smith, who has never won a team state title since his coaching tenure began in 1986, the meet represented a breakthrough. One year after the Bowmen had their best chance at a state title snatched away by the COVID-19 crisis, they found redemption in victory at the Showcase, which included all but six 6A schools.

“We're actually thrilled,” Smith said. “We had been disappointed because we had a group that we thought could pick up something. We had it set up for last year. Could we sustain that through COVID and still be able to compete at this level? The proof is in the pudding. Here we are.”

From Mull's perspective, she got a chance to see the Oregon City girls come full circle from their state co-title in 1989, when she was a standout javelin thrower on the team.

“That's a long time ago,” said Mull, who has coached at Oregon City since 1994, taking over as head coach in 2003. “The people I was with back then were great, and this group is awesome, too. It's cool. It was fortunate that we got to do it on our home field, at our track.”

Sherwood's boys scored 120 points to pull away from Wells (68), Newberg (61), Central Catholic (55) and Sandy (44). The Bowmen got big performances from senior Noah Culbertson, who won the shot and was runner-up in the discus, and senior Asher Krauel, who took the javelin with a school-record throw of 198-7.

But there was so much more for Sherwood.

Rogers set school records in finishing fourth in the 3,000 (8:26.59) and seventh in the 1,500 (3:54.34). Sanders was second in the high jump and sixth in the long jump. Sophomore Austin Milton took third in the javelin. Senior Bryan Cuthbertson placed fourth in the shot.

“It appears that we hadn't peaked until today,” Smith said. “You've got to show up to the dance and you've got to perform. At every point, our kids really stepped up and actually exceeded our expectations. Probably over my entire career, up and down the board for the boys, this was the most satisfying win.”

Yes, Centennial, Grants Pass, Gresham, McNary, Roseburg and North Medford did not participate in the meet, but in reviewing the state-best lists, Smith said the presence of those teams would have had minimal impact on the scores. He asserted that the qualifying process for the meet, largely based on the state-best lists, set a higher bar than the usual automatic district berths.

“We'll put money on the fact that there were many events at this meet that were better than any state meet,” Smith said.

Franklin senior Charlie Robertson won the 3,000, two years after taking the event in the 6A meet. Central Catholic senior Liam Shores won the 200 and 400 and was the anchor for the winning 4x400 relay.

Oregon City's 4x400 team of freshman Samara Lugo, Leasure, Daniel and Beckmon finished second by one one-hundredth of a second to Lake Oswego.

“There weren't a lot of PRs, but they were right on them. They were consistent,” Mull said of her athletes. “They did a fantastic job. They just performed really well, came out and did what they were supposed to do.”

Given who is eligible to return, the Pioneers could be going for a 6A title in 2022.

“I think we'll go back next time, and it's going to be fun,” Mull said. “Even I would say that there's something magical about Hayward.”

Jesuit junior Chloe Foerster, the 6A champion in the 800 as a freshman, won the event by 2.4 seconds over Summit junior Magdalene Williams in a highly anticipated duel.

Franklin senior Autumn Ost won the 1,500 and 3,000 and Glencoe senior Jayda Lee took first in the shot and discus.

Seniors Nerissa Thompson and Eimy Martinez showed the way as North Salem's girls finished first in the 5A Invitational at Wilsonville on Friday and Saturday.

Hidden Valley swept the 4A Showcase meet Friday and Saturday at Siuslaw, winning the boys and girls titles.

The Mustangs' girls team outscored runner-up Siuslaw 82-50 behind senior Jada Hurley, who won the 100, 200 and 400 and ran a leg on the winning 4x100. Hidden Valley also got wins from Stanford-bound Kaiah Fisher in the shot and discus and from senior Jaaden Steele in the triple jump.

Senior Jadyn Vermillion won four events to lead Sutherlin's girls to first place in the season-ending 3A meet at Harrisburg on Monday and Tuesday.

Sutherlin also got wins from junior Mallory Turner in the 100 hurdles and high jump and junior Erica McDonald in the shot.

St. Mary's senior Jensyn Ford won the 400 and was part of both winning relays. Riverdale freshman Zoe Rector took the 800 and 1,500.

Gervais senior Katie Hanson stole the show at the season-ending 2A meet in Union, winning the 200, 400 and long jump.

But Regis finished first in the girls meet, scoring 60 points to beta Faith Bible (47) and Gervais (43). The winning Rams were led by junior Whitney Stepp, who won the high jump and placed second in the triple jump and fourth in the long jump.