Baseball: Clackamas rallies late to nip Lakeridge, 2-1
Tweet
Winning run scores on balk with two out in the bottom of the sixth
May 17, 2021 by John Tawa, OSAAtoday 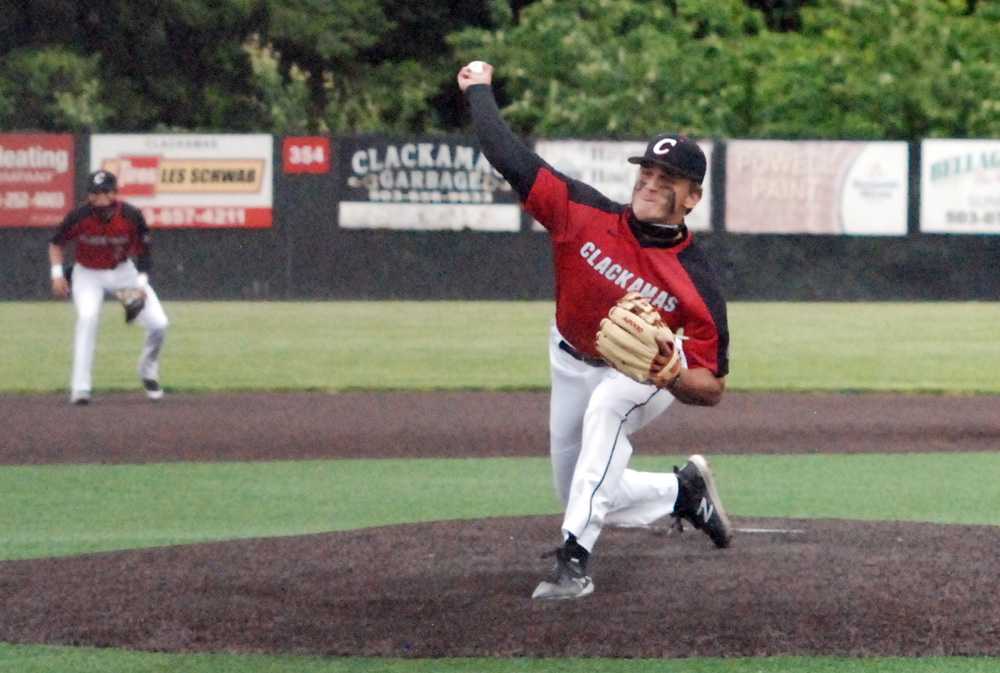 Both pitchers went the distance. They combined to strike out 14, and yielded just nine hits and one walk (intentional) between them. The winning run scored on a balk with two outs after an error opened the door.

The game marked the last at home for Clackamas head coach John Arntson, who is retiring after his 24th season is complete to become the school’s athletic director.

“That’s one of the better teams in Oregon,” Arntson said of Lakeridge, which has five Division I recruits. “It was fun to go blow-for-blow and pull it out at the end. I’m going to remember that for a long time.”

Lakeridge got on the board first in the second inning against Clackamas ace Jackson Jaha, a University of Oregon recruit. The junior righthander left a 2-1 fastball in the middle of the plate and Pacer 3B Josh Schleichardt made him pay. The Utah-bound senior launched the pitch into the trees over the 355-foot mark in left-center.

For most of the game, it appeared that Lakeridge pitcher George Eisenhardt would make the 1-0 advantage hold up. The Xavier-bound righty yielded just two singles and no walks through five innings, using a fastball that registered in the low 90s and an off-seed pitch that had Cavalier batters fooled most of the evening. When Clackamas batters did reach base, they did not stay for long, as the Pacers produced two double plays to help them get out of jams.

Jaha, meanwhile, settled down after the home run and allowed just one more hit and no walks through six innings, while fanning seven during that stretch.

Clackamas’ 9-hole hitter, junior 2B Austin MacClanathan, started the Cavaliers’ winning rally in the bottom of the sixth with a one-out line single to center. He advanced to second one batter later, when Tatum Erickson reached on an error, and scored on a single to left from Trevor Wilson, tying the game.

“They’re grinders and they stayed the course,” Arntson said. “We’ve had to deal with adversity here and there throughout the season and we talk about how to respond to it. ‘Keep yourself in the game, keep things close and keep giving yourself a chance.’ I thought we did that.”

Clackamas wasn’t through, however. Each runner picked up an extra base when the throw home sailed the cutoff, putting runners at second and third with one out. Lakeridge intentionally walked Jaha, the only walk of the game yielded by either pitcher, but appeared poised to escape with no further damage, when Eisenhardt, working from the windup, struck out the next batter and then got two strikes on the 5-hole hitter.

Arntson called for Erickson on third to bluff going home. The base umpire ruled that Eisenhardt flinched and awarded Erickson home plate.

“We had a big strikeout there with our 4-hitter,” Arntson explained. “I thought, ‘Let’s take a chance.’ It’s something we practice every day. Once we got to two strikes the odds were low. ‘Let’s take a chance and see if it works’ and it did. We were fortunate.”

Lakeridge’s Mason Utech led off the seventh with a ground ball single to right, but the Pacers could make nothing of it. Jaha’s eighth strikeout, a fielder’s choice and ground ball to short followed, sealing victory.

With the win, Clackamas improved to 15-2 on the season. The Cavaliers have lost only to Barlow, 2-1, and undefeated Grant, 1-0. Lakeridge, which started 14-0, fell to 14-2. The Pacers, who lost to Sherwood on Saturday, have now dropped two straight.

“It was an incredible game,” said Ray Pearson, Lakeridge’s first-year head coach. “Our kids came out after a devastating loss on Saturday, where they didn’t play well, and if it wasn’t for a couple of mistakes in the infield, the game would have been different. I’m very proud of the kids. The result doesn’t reflect the character of the players.”