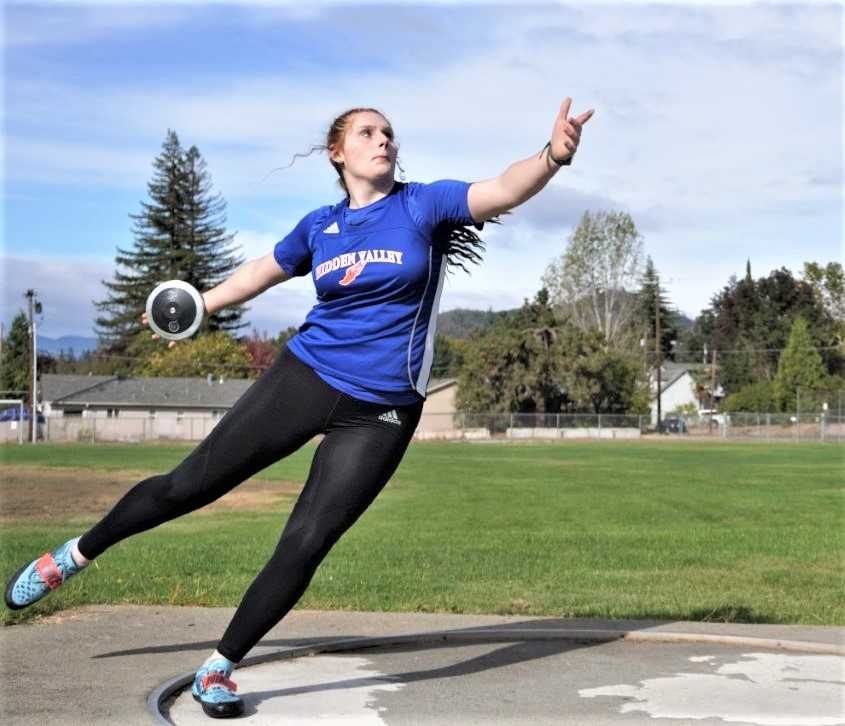 Hidden Valley senior Kaiah Fisher ranks fifth in the nation in the discus.

For much of the past year, Kaiah Fisher's training grounds were far from ideal.

“Most of the high schools were closed, so it was difficult to find somewhere to throw,” the Hidden Valley senior said. “We ended up throwing off sidewalks in the park, random places where we could find a slab of concrete. Trying to avoid the cow patties in the pasture.”

It didn't deter Fisher, though, And now she is reaping the dividends.

On Wednesday at Henley, the Stanford-bound Fisher set the 4A record in the discus with a throw of 165 feet, 3 ½ inches, which ranks No. 2 all-time in the state behind Sherwood's Shelby Moran (179-7). The same day, she also set a personal-best in the shot at 45-1 ½, which leads the state this season.

“It was great,” said the 6-foot-1 Fisher, who ranks fifth in the nation in the discus. “I've been working a long time for it, so it was nice to kind of see the results of all the work I've been putting in. I know I've got a lot more to go. This is just the start.”

“I already knew I had broken the record at that point, but I really wanted to get another one,” she said. “I knew there was more in there, man. I stepped in there for the next one ready to go. A little more speed on that one.”

What's next for Fisher? She is taking aim at Moran's all-time state record.

“Hopefully we'll get there,” Fisher said. “I've been getting kind of consistent in the high 160s, and 170s, in practice. So I think that once I get some adrenaline for a meet, and the right circumstances, I think I might get there.”

Fisher was the 4A runner-up in the shot and discus as a sophomore, when her bests were 41-11 ½ and 139-11, respectively. Her junior season was foiled by the COVID-19 crisis, but she took advantage of the down time to lift weights and train with her father, Hidden Valley athletic director Dale Fisher, a throws coach for the Mustangs.

“The shutdown really helped me get strong, because usually I'm always in a sports season,” she said. “I'm in soccer or basketball or track, and it's really hard to get strong and keep lifting through it.”

Fisher burst onto the scene as a freshman by setting Hidden Valley school records in the shot (42-8) and discus (109-8). She placed third in the shot at the 4A meet in 2018 but did not qualify for state in the discus.

She has been a late bloomer in the discus.

“She's still so young in her journey,” said Dale Fisher, who was the head coach at Hidden Valley (1995-96) before spending four seasons as the head coach at Southern Oregon University (1997-2000). “She didn't really become a discus thrower, or even really like or think that she could throw the discus, until partway through her sophomore season. That's when everything started to click a little bit.”

Kaiah was able to carry that discus momentum through the shutdown.

“Once quarantine hit, it was kind of a bummer because we had been working so hard in that event in particular,” she said. “So it just gave us a little more drive, more punch, more reason to keep working. So we got another year of just practicing and repping. I was just super excited to finally get to compete again and get those marks that I've been working so hard for.”

The season is ticking down quickly, though. She is working toward the Skyline Conference district meet May 15 and the season-ending 4A Showcase the following week.

“This short season, gosh, I wish we had more time,” Dale said.

If Kaiah can't get the state record, she still is well within range of finishing her career as the top high school thrower in the country. Amelia Flynt of Katy Cinco Ranch (Texas) currently holds the No. 1 spot at 171-0.

“That would be really cool to get No. 1 in the nation and kind of hold onto that going into college,” Kaiah said.

Before moving on to Stanford, Kaiah will serve as valedictorian at Hidden Valley. Dale said he is proud of how Kaiah has worked to become an elite thrower, and more important, how she has risen to meet the unusual mental challenge of the past year.

“The kind of person she is, and how hard she works, she makes me want to do better,” Dale said. “I never have to ask her to do anything. She's always asking me, 'Hey, can we go throw today?' Or, 'Can we do that today?' For the last year, she's just been working her tail off.

“She's the best woman I've coached, for sure. There's no doubt.”