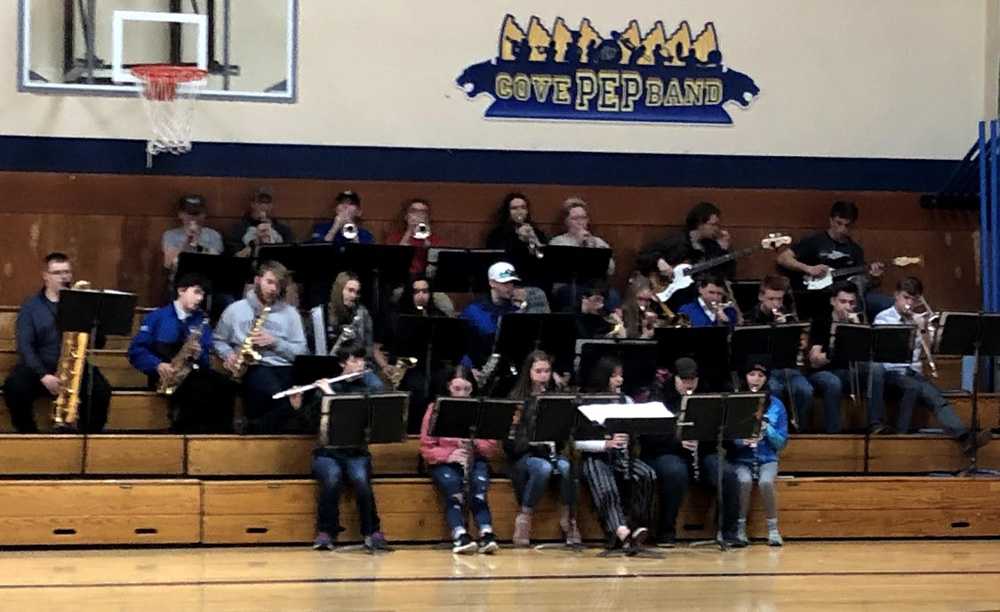 [Editor’s note: The idea behind “Alphabet Stories” is to write one noteworthy athletics-related story about each OSAA-member school. We started with Adrian HS on Sept.18. Today’s story, nearly six months later, is about Cove Charter HS. The goal is to write two per week all the way to Yoncalla! While we will be relying upon athletic directors to furnish story ideas, anyone may offer suggestions by emailing [email protected]]

Band is mandatory at Cove Charter School from fifth through eighth grade.

While being required to play a musical instrument might be a source of dread for some adolescents, that’s not usually the case at Cove, a small 1A school in the eastern part of the state, near La Grande.

That’s because, for the past quarter-century, the band has been headed by a revered alumnus. His name is Ted McBride, but it should be “Ted McPride” for the way Cove and the surrounding community have embraced this teacher and the music his students produce.

“He really is an amazing teacher and member of our community,” said athletic director Candy McGilvray.

McBride was a shy, introverted child during his formative years growing up in Bothell, Washington. He found his footing in music.

“A few of my elementary teachers would have me play songs on the piano for the class in an effort to boost my confidence,” McBride recalled. “It had a significant impact on my life.”

Although most Cove students don’t pick up an instrument until fifth grade, McBride started tickling the ivories when he was a second grader.

“My father told me that if I would learn to play the piano, he would buy me any instrument I wanted,” McBride said.

McBride added trumpet in sixth grade in the school band and, one year later, picked up two stringed instruments, bass and guitar. Guitar is his passion.

McBride’s other passion is his love for music in general. A child of educators, he found his niche in sharing that love of music in a classroom setting.

“Although some have gone on to play their instruments beyond high school, that is not my main objective,” he said. “It is my hope that each student will have an appreciation for the arts and love for music that will enrich their lives. I will take whoever signs up and try to motivate them to become a better musician.”

Because of McBride, most middle schoolers continue in the band once they enter high school. Grades 9-12 usually total fewer than 100 students, but the high school band usually has between 18 and 25 members. This year, the Leopards are 25 strong. They play all basketball games and have also been known to toot their horns at a football game or volleyball match. The Cove Pep Band has been a regular winner of the District Basketball Tournament Pep Band Award.

A true testament to the band’s reputation for excellence, Cove is routinely asked by neighboring high schools to play for them at tournaments even when Cove athletic teams are not represented. Cove also has played for the football and basketball programs at Eastern Oregon University in La Grande.

McBride said that teaching music in the community has been rewarding on so many levels. He feels the students’ excitement about the arts and appreciates how supportive the administration and staff are about what he does.

Moreover, the band’s excellence has become a source of pride in the community.

“It’s a tradition that remains important and is valued by the people here,” McBride said.

Finally, teaching music gave McBride the opportunity to teach his own three children from Kindergarten all the way through graduation.

“Now my first grandchild is in my Kindergarten music class,” he said.

“I have personally observed their love and engagement in the arts,” he added. “It illustrates what I try to accomplish with all of my students each year.”