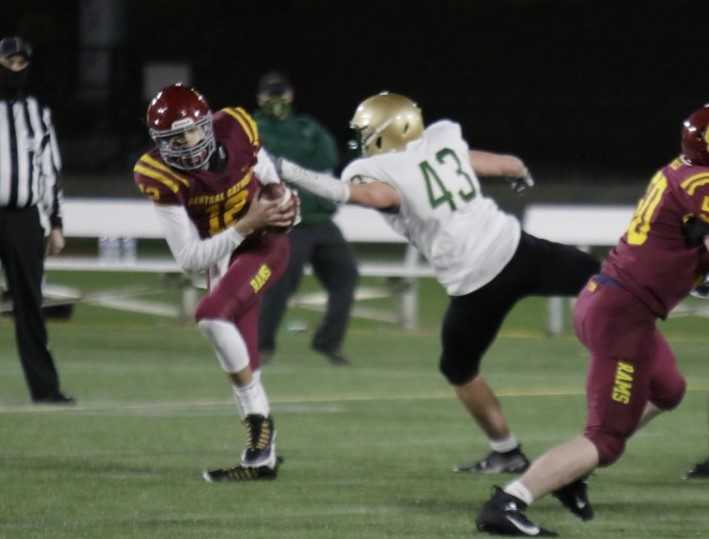 HILLSBORO – Luke Johnson had already established himself on the basketball court at Central Catholic, playing a key role on a 6A tournament team as a sophomore last year

But the 6-foot-7 junior hadn't started a varsity game in football, and the reigning 6A champion Rams didn't know how their new quarterback would perform under the lights.

They got their answer Friday night in the season opener against Jesuit at Hillsboro Stadium as Johnson passed for 255 yards and four touchdowns in a 35-6 win.

“I felt comfortable, I felt great,” said Johnson, who completed 21 of 37 passes with two interceptions. “I was ready to play. Game time comes, I'm ready to go.”

“He's a gamer. He never looked anything close to that in practice,” Pyne said. “He's a pretty savvy kid. He walks around with a ton of confidence, maybe too much confidence sometimes. But that's OK. That's what you want out of kids.”

Johnson's performance was encouraging, but in the big picture, the game represented so much more for everyone involved. The teams finally got to play after a six-month delay to the season due to the COVID-19 crisis, and even with empty stands, the feeling was that football was back.

“It was really a blessing because we haven't been out there in so long,” Johnson said. “We've been looking forward to it, with the uncertainty throughout the offseason, whether we were going to have a season or not. Finally being able to be out there and play, it was great.”

Rams junior receiver Jordan King, who caught six passes for 90 yards and two touchdowns Friday, got a chance to show why many consider him a rising star.

“It was exciting,” King said. “Fifteen months is a long time. A lot of hard work in the offseason, so it was good to get out here and see it pay off. It was fun.”

After a choppy start, Central Catholic's offense found a rhythm in the second quarter. That's when Johnson erupted for three touchdown passes, connecting with King from 11 and 18 yards and with junior Xavier Simpson from 14 yards.

Johnson and King – teammates on the basketball team – showed that they have chemistry on the field, too.

“Me and him have been working pretty hard this whole offseason, this whole year, preparing for this,” Johnson said. “I love having him out there.”

King liked what he saw from Johnson.

“He was under duress a little bit, and he made some good throws in the pocket,” King said. “So I'm proud of him. We've still got a long way to go.”

Johnson missed some throws but showed an ability to stand tall in the pocket and deliver strong throws down field, many times while absorbing shots from the Crusaders. His height and long arms allowed him to get the ball away in the face of pressure.

“He certainly can see what's going on,” Pyne said.

Jesuit was the only Oregon team to beat Central Catholic in 2019, rushing for 485 yards to win 42-26 in Week 5 at Hillsboro Stadium. The Crusaders had won the last two regular-season meetings and entered with a 23-15-1 advantage in the series.

“Since I've been here, we hadn't beaten them,” King said. “The only time I beat them was in basketball. So today felt good.”

Despite this game being played in March, the significance of beating Jesuit wasn't lost on the Rams.

“It for sure matters, because it's Jesuit-Central,” Johnson said. “It always matters.”

And even though there will be not state championship this season, the Rams are playing as if they have a title to defend.

“We know what it takes,” Johnson said. “I think we were prepared to be a state championship team this year.”

Jesuit is trying to find its way after graduating all but two offensive starters from a 6A semifinal team -- senior linemen Declan Quillin and Charlie Pickard.

In the first half, Jesuit failed to gain traction with its running game against a fast and aggressive Central Catholic front. In the second half, the Crusaders finally started to find some daylight.

Junior running back Michael Rincon rushed for 114 yards after halftime, including a 58-yard touchdown in which he busted through the middle of the defense after being hit in the backfield, bringing Jesuit within 21-6 early in the third quarter. Rincon finished with 162 yards on 23 carries.

Jesuit had a chance to get closer after reaching the Central Catholic 3-yard line late in the third quarter. But on fourth-and-goal from the 8, junior quarterback Tatum Lewis' pass to junior Spencer McKelligon was broken up in the end zone by Rams junior Malik Rose.

Central Catholic drove 92 yards to make it 28-6 on a 10-yard pass from Johnson to junior Stryder Todd-Fields.

The red zone was not kind to Jesuit. The Crusaders also got to the Central Catholic 5-yard line in the fourth quarter and came up empty. They reached the 18-yard line minutes later, but freshman quarterback Matt Irwin was intercepted by senior Myles Broadous, who returned it 92 yards for a touchdown with 32 seconds left.

“We had our opportunities to make it closer,” Jesuit coach Ken Potter said. “Getting down in the red zone twice and not scoring is not indicative of good things. If we had scored both those times, it would've been a much closer game.”

Jesuit finished with a 323-265 edge in total yards, but couldn't capitalize at key times. Lewis completed 7 of 18 passes for 103 yards with one interception.

“Execution was looking like a first game, against a team that probably has a little more experience than we do,” Potter said. “We're still trying to figure out who we are. I wasn't disappointed in our kids' effort. … I thought we got better as the game went along.”