Football: For Lakeridge's Basso, ticket to Oregon is a snap
Tweet
Luke Basso, a five-star long snapper, earns a preferred walk-on opportunity with the Ducks
December 28, 2020 by Jerry Ulmer, OSAAtoday 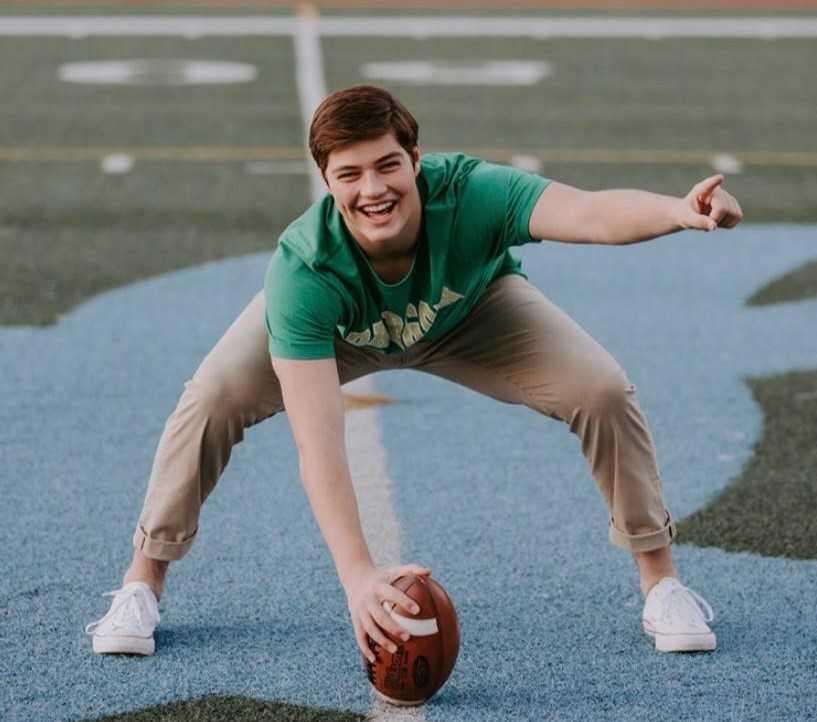 Luke Basso's punt snaps have been clocked as fast as 0.66 seconds.

As a center in his youth football days, Luke Basso figured that long snapping was just part of the job description.

It wasn't until he was a freshman at Lakeridge – when he heard about long-snapping camps -- that he realized that a golden opportunity was hidden in the specialized skill.

“Before that, I didn't even know long snapping was a position in college,” said Basso, now a senior. “I always thought the center did all the snapping. I started to go to more camps, and over time, it kind of took off.”

As a sophomore, Basso began attending Rubio Long Snapping camps and refining his technique, and two years later, it has paid off in a big way, with a ticket to play football the University of Oregon.

This month Basso, rated as a five-star recruit by RubioLongSnapping.com, signed with the Ducks as a preferred walk-on. He also had preferred walk-on offers from Nevada and Sacramento State and was talking with Baylor, Penn State, Alabama, Oregon State, Arizona and Utah, but couldn't pass up Oregon.

“Oregon had always been the dream for me,” Basso said. “I couldn't believe it for a while. I still don't believe it. They have exactly what I want, not only for a team, but for school, as well. I sought after that school.

“Right now it's a preferred walk-on with the opportunity, so that when I start to earn the position, I will get the full scholarship. It just pushes me to work harder.”

So what sets the 6-foot-2, 220-pound Basso apart from other long snappers?

A typical high school long snapper takes one second to deliver the ball to the punter, 15 yards away. Basso has been clocked as fast as 0.66 seconds and has an average snap time of 0.71. College times are in the 0.75 range.

Basso also grades high for accuracy, consistently placing the ball in a tight pocket for punters and holders. In target practice, he can hit the base of the goal post from 30 yards away.

“It was funny, when I took the job here, somebody told me, 'You've got a five-start athlete,'” Phillips said. “I was like, 'Oh, that's good. What position?' They said, 'long snapper.' I didn't know that was a thing.

“I joked around and said, 'Well, let me see what a five-star long snapper looks like.' He's incredible. He's a dead-eye. He doesn't miss.”

Phillips, who has coached in the NFL, isn't one to undersell the importance of a dependable long snapper.

“It's an invaluable skill,” Phillips said. “You get it down to a science, and you've got that unique skill set that people can trust, and the next thing you know, you've got a 15-year NFL career.”

Former Lakeridge special teams coach Tyler Dodge referred Basso to the Rubio camps, which are run by Chris Rubio, who played at UCLA. Basso first attended a camp as a sophomore in Seattle, where he began to measure himself against other long snappers, carefully studying the technique of the older, highly regarded ones.

It didn't take long for him to climb the ranks.

“I had a good spiral, and from the start it was kind of natural movement for me,” Basso said. “So I realized that this is something that I can really get good at and keep doing. I set goals for myself. I just kept practicing and working, and I started to build confidence in myself.”

Basso, who lives near the Lakeridge football field, has put in long hours of training during the COVID-19 shutdown. He also has benefited from working with former Oregon and NFL long snapper Tanner Carew.

Basso began to attract college attention through evaluations and videos posted on the Rubio website. As Basso posted videos to Twitter and YouTube, the recruiting interest grew.

“Anything that I could do to get my videos and film out to coaches,” Basso said. “More instructors would help me improve my spiral and my speed and ability over time. Coaches started to kind of recognize that.”

After his junior season, coaches began to reach out through direct messages, text messages and phone calls.

“When COVID hit, Twitter was huge for recruiting, and that's what really got things going, especially because we couldn't go on official visits,” Basso said.

Basso raised his profile another notch from his performance this past summer at a Rubio camp in Texas. He earned his fifth star at the camp and moved up to No. 5 in the nation.

“Pretty much the best snappers in the country were there,” he said. “I performed very well. That's when it all happened. It was a slow process. It started up with the rankings, and it just moved forward over time.”

Basso – whose father, Patrick, played on Lakeridge's 1987 state championship team and was a receiver at Lewis & Clark College – has high expectations for his senior season. A backup center and tight end, he is set to start on defense at linebacker and defensive end.

Practice is scheduled to start Feb. 8.

“I plan on being a huge contributor for the team, being a leader as a senior,” said Basso, who plans to study sports business and marketing in college. “There are a lot of young guys that are going to get some playing time, and I want to be one of those guys that can help them.”