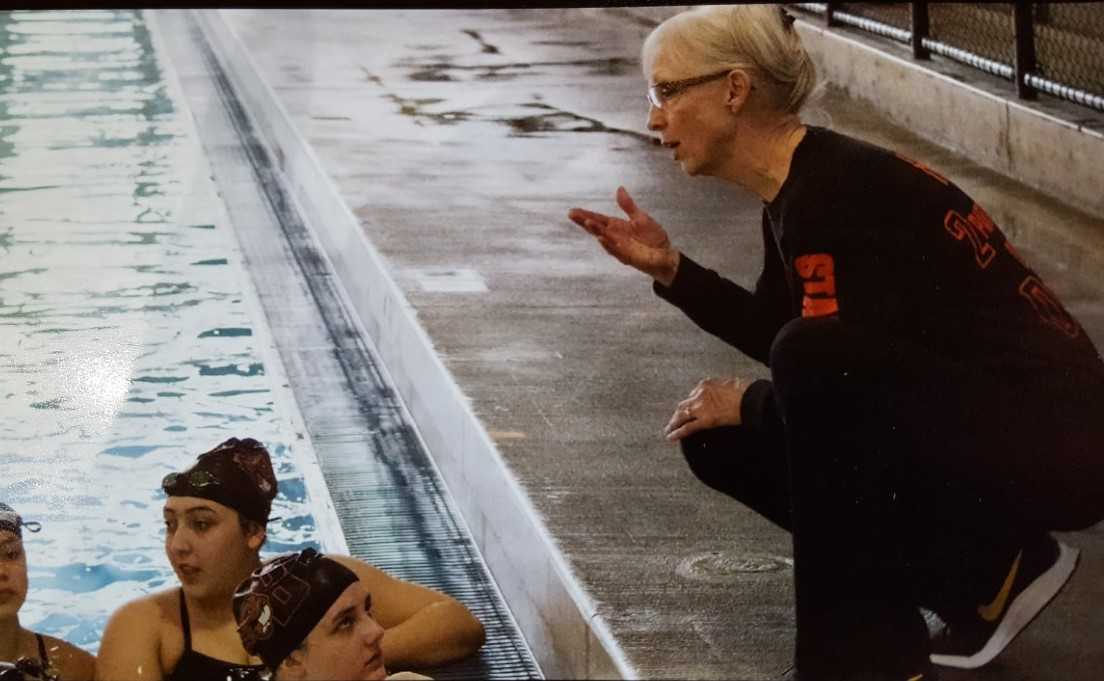 Beaverton's Judy Rusaw was the NFHS sectional coach of the year in 2006. (Photo by Cathy Gayaldo)

Judy Rusaw began coaching high school swimming at age 40 as a way to help provide for her three children.

Now, as she looks back on a 35-year coaching career at Hillsboro and Beaverton, Rusaw is finding that coaching gave her more than she ever could have imagined.

“I just hope that I gave back to my swimmers as much as they gave me,” Rusaw said. “High school swimming was very, very rewarding to me.”

Rusaw, 76, retired from coaching this year. She was the head coach at Hillsboro for 24 years (1985-2009) before spending 11 seasons at Beaverton, the last eight as head coach.

Rusaw said it was time for her to step away.

“I just felt like the last couple of years was a little hard for me,” she said. “I had some health issues that I was dealing with. Nothing really serious, but I felt I wasn't able to give 100 percent. Last year was probably the toughest one. The kids probably didn't notice it that much, but I did.”

“I wasn't worried about getting it,” Rusaw said. “I kind of had in my mind several years back that 35 years was a good place to stop. With my age, too, you only have so much energy. I felt like there were other things I would like to do. It was a tough, tough decision.

“I just kind of thought this was a good time to make the break, and then when COVID happened, it gave me the opportunity to evaluate the future. But it wasn't the main reason that I stepped down.”

Rusaw grew up in Visalia, Calif., where she set a national high school record in the 50-yard freestyle. She attended College of the Sequoias, a junior college that did not offer women's swimming, before graduating from Fresno State.

“In 1962, there weren't a lot of opportunities for women in college swimming,” she said.

She moved to Oregon in 1972 when her husband at the time, Ken Edwards, was hired as the men's basketball coach at Portland State. Her brother – Rolland Todd, the first coach of the Portland Trail Blazers – had notified Edwards about the job opportunity.

When Judy and Ken divorced in 1977, she earned her teaching credential at Portland State. She taught swimming at a preschool and managed pools in Aloha, Forest Grove and Hillsboro.

“Swimming, it saved my life, really,” she said. “When Ken and I got divorced, I didn't know what I was going to do. I had three children to raise.”

She took over as the Hillsboro coach in 1985, shortly after her oldest son, David, had completed a four-year varsity career with the Spartans.

Her other children, Greg and Julie, graduated from Hillsboro in 1987 and 1989, respectively. Greg was Hillsboro's boys basketball coach from 2000 to 2009, compiling a 153-88 record. Julie, a volleyball standout, played at Chaminade University (Ha.).

Rusaw also coached in the Hillsboro Heat club program from 1989 to 1996 and started Hillsboro High School's water polo program in 2000, serving as a volunteer coach for seven years.

She resigned as Hillsboro's swim coach in 2009, and a week later, got a call from Beaverton. She was an assistant for three seasons under co-coaches Matt Baya and Peter Adam before becoming head coach in 2012-13.

“I always thought that I wanted to keep coaching a few more years, anyway, and when I got the call from Beaverton, it was ideal,” she said. “I had a great run at Beaverton. It was exciting.”

At Beaverton, Rusaw coached Van Mathias, the state record-holder in the 100 butterfly and 200 individual medley who is now a junior on the team at Indiana University.

Rusaw spent most of her career coaching against powerhouse teams in the 6A Metro League. She encouraged her swimmers to embrace the challenge.

“We would always try to score more points against them than we did the season before, to show our progress,” Rusaw said. “It was sort of an inspiring thing for them to see what hard work can do.”

“I never realized how much I would love coaching,” she said. “It was kind of my mission field, in a way. I'm just so thankful for the opportunity, because it was really a privilege to do this.”