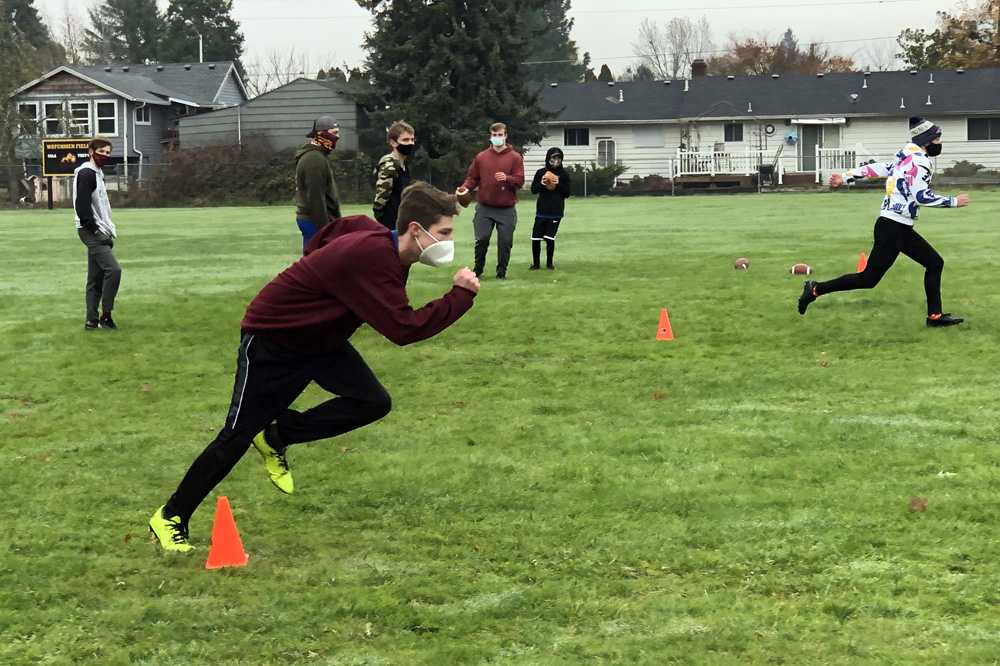 [Editor’s note: The idea behind “Alphabet Stories” is to write one noteworthy athletics-related story about each OSAA-member school. We started with Adrian HS on Sept.18. Today’s story, more than two months later, is about C.S. Lewis Academy. The goal will be to write two per week. While we will be relying upon athletic directors to furnish story ideas, anyone may offer suggestions by emailing [email protected]]

Steve Wallo believes in the power of sport.

“Athletics can teach you so many things,” he said. “If we can offer a student-athlete experience to kids that wouldn’t get one in a big school, that’s pretty cool.”

Wallo is an administrator and the Athletic Director at C.S. Lewis Academy, a very small K-12 Christian school in Newberg with a current high school enrollment of 30 students. He signed on to the Watchmen in 2011 after almost three decades as a coach (baseball and football) at the high school level and at Lewis & Clark College.

In recent years, interest in boys soccer at C.S. Lewis has been on the wane. Most seasons, the Watchmen play as a co-ed team against all-male squads just to have enough to field a roster. Last fall, the school was not able to field a team at all.

Every year since he’s been at C.S. Lewis, Wallo has received inquiries from students and parents about football. The interest has picked up in recent years. George Fox University in Newberg reinstated football in 2014 after a 45-year hiatus and has the city excited about the sport. Two years ago, the Oregon School Activities Association began sanctioning 6-man football, making the sport more accessible for even the smallest of schools.

“I’ve thought about football since I’ve been here,” Wallo admitted. “I’ve been a football guy for a long time and believe in it. Football has a different effect on a school. Friday night under the lights has an effect on the culture of a school. When 6-man started, I thought, ‘Whoa! We can do this!’ It ignited my thinking that 6-man might be a possibility.”

This fall, with high school athletics largely on hold due to COVID-19, Wallo started a football club for middle and high school students. He dusted off his whistle, enlisted the help of George Fox senior linebacker Bradley Thurber, and set off to see who would show up for the 90-minute sessions on Saturday mornings in November.

“I thought this would be a Covid break,” Wallo said. “It’s an outdoor activity and the drills we did kept reasonable distancing.”

Ten students showed up, consistently, for “Football 101” throughout November. Half were from the middle school. Wallo plans on offering more sessions after the first of the year.

“I could have sent out a survey,” he said. “But what better way to gauge interest in football than to see who would show up on cold November Saturday mornings?”

Though only one had ever played football before, Wallo saw glimpses of talent.

“A couple of the juniors are just good athletes,” he said. “And we have a freshman who could be a lineman almost anyplace else.”

Six-man football, Wallo stressed, is not the physical 11-man variety played at Fox or at 6A Newberg High School.

“It’s such a wide open, fun game,” he explained. “There’s not a lot of head bashing and injuries are lessened. It’s what you play in a turkey bowl on a Sunday afternoon. The only difference is you put a helmet on.”

C.S. Lewis Academy could add football as early as fall 2021 if approved by the Board of Directors. Wallo said, however, that the school hasn’t started any type of formal review yet on the feasibility of adding the sport.

“I don’t think I could advocate for it right now,” he said. “It has to be sustainable. I don’t think right now we’re at numbers where we could pull the trigger. I wouldn’t want it to start and not have a team the next year.”

Wallo does want to make sure that the Watchmen have a fall team sport for boys. They had enough boys and girls this fall for 8-player co-ed soccer, something a handful of smaller 1A schools are trying out, but the interest in football appears to be surpassing that of soccer at the school.

Wallo admitted that it’s gone through his head that football could spur enrollment at the high school, which is less than half of its current capacity as a result of multiple campus moves and new leadership at the top over the past several years.

“We were looking at a good bump in enrollment in June and July,” Wallo said, “but, with Covid, the metrics changed in August. Football could help enrollment.”

Football also would be energizing for the existing student body.

“Football itself is a different thing,” he said. “It would be fun to give our kids that experience.”