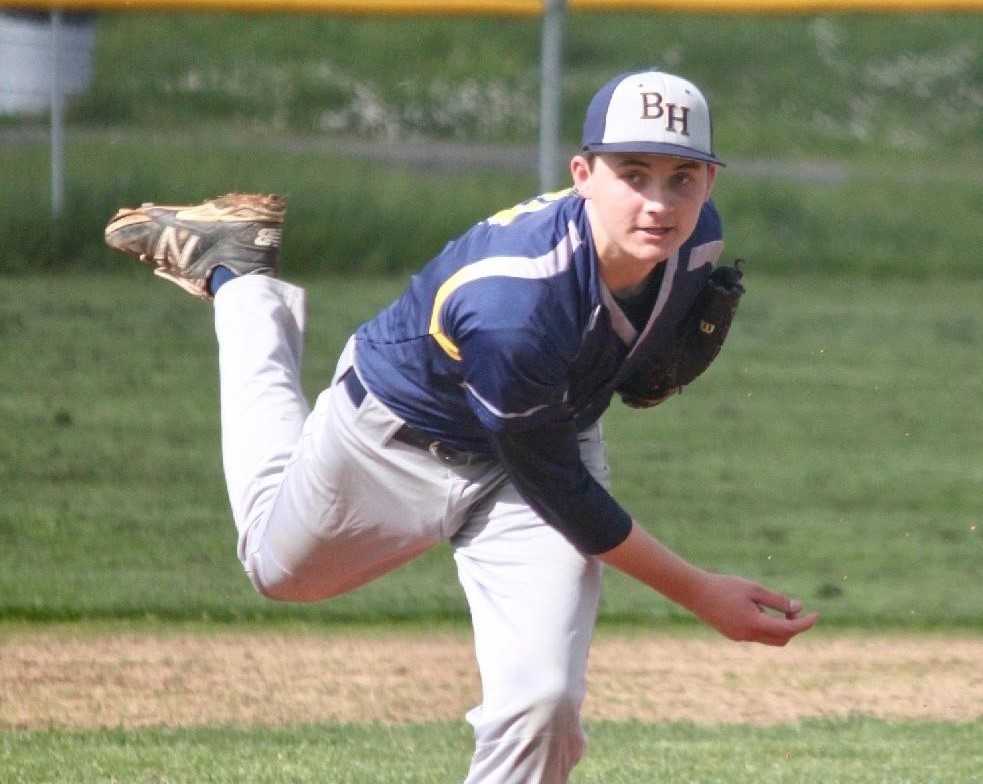 By signing with the University of San Francisco this month, Brookings-Harbor senior pitcher Adam Shew followed the lead of his brother, Anthony.

But Shew won't be satisfied with simply tracing the footsteps of Anthony, 27, who has climbed to Triple-A as a pitcher in the St. Louis Cardinals organization.

“Maybe he doesn't know it yet, but I really want to get further than he does,” Shew said.

Shew has high aspirations, and also the pedigree. Not only has his brother made a living from baseball, but so has his cousin, Ian Kennedy, a major-league pitcher for the last 14 seasons, most recently with Kansas City.

“We talk every once in a while,” Shew said of Kennedy. “My brother is more connected to him. Just like my brother is to me, Ian was to my brother. So that chain kind of ran down to me through my brother, the knowledge. It's motivating.”

The 6-foot-1, 185-pound Shew grew up in Mission Viejo, Calif., and moved to Brookings as a sixth-grader. He became the Bruins' No. 2 pitcher as a freshman and broke out as a sophomore, going 9-2 with a 1.77 ERA and 98 strikeouts in 59 innings for a team that won the 3A Far West League title and reached the state quarterfinals.

Brookings-Harbor coach Keith Wallin said Shew has been “a little under the radar” while pitching for a small school on the southern Oregon coast. It didn't help that his promising junior season was wiped out by the COVID-19 crisis.

“We're down here in the bottom corner, so it's tough to get noticed here in Brookings,” Wallin said. “Having seen kids that we've had go through here in the last 25 years, that threw a little bit at the next level, his knowledge is head and shoulders above most. I think that's really his key, his ability to think at a higher level than most.”

Shew said that adjusting from the fast pace of Southern California to Brookings was a bit of a culture shock, but ultimately, it helped build his character.

Shew is more of a tactician than a flamethrower, but his velocity has picked up considerably as he matures. He threw in the mid-70s mph as a freshman, near 80 as a sophomore and now sits in the 84-85 range.

“I've been trying to use my legs a little bit more lately,” Shew said. “I still haven't quite figured it out, but working on it, I've seen growth, so I definitely think that there's still more to go there. I want to be sitting around 86-87 by the end of this year, going into college. From then on, I think I'll be able to get to 90.”

Shew has an arsenal of four pitches, including a “Vulcan changeup” that he learned from Anthony that has become one of his best strikeout pitches. He added a slider to his repertoire this year.

His brother. who played in high school in California, has been invaluable in offering guidance.

“I'm able to send him video all the time, ask him about mechanics,” said Shew, who currently is staying with his brother in Arizona. “What things he feels versus what I feel, and how to make adjustments. He's been a really good resource for me.”

Wallin marvels at the mental acuity of Shew, a candidate for valedictorian. By utilizing different approaches, Shew keeps hitters off balance even after the second time through the order.

“His knowledge of understanding how to set up a hitter – how to change planes in different directions, and work off pitches he's already thrown – is unlike anything we've ever seen,” Wallin said. “That's truly where he shines. He enjoys the mind game and the chess game.”

Wallin said that Shew and his brother have “very, very high-level conversations about how to pitch to hitters at the next level, not necessarily the high school level.”

It's no accident that Shew's style mirrors Anthony's.

“He's definitely more of a finesse guy, works with his off-speeds and stuff, and so am I,” Shew said. “In so many ways, we're the exact same pitcher. The way it looks, the way we attack hitters. Everything I've learned has been from him.”

Considering Shew is bigger than his brother was at the same age, his potential is intriguing.

“He's going to get a little bigger and quite a bit stronger,” Wallin said. “I can honestly see him being a kid that ends up throwing in the low 90s in college, with three or four pitches, which is kind of a rare thing. He can throw five.”

Interest in Shew from college programs was lukewarm. He went on a recruiting visit to Oregon, which showed mild interest, before committing to San Francisco.

“I think even if I had gotten other offers from colleges, I still would've picked San Francisco because my brother went there,” Shew said. “I really like how they run their program.”

As he prepares for the next step, he is eager to measure his progress against his brother's.