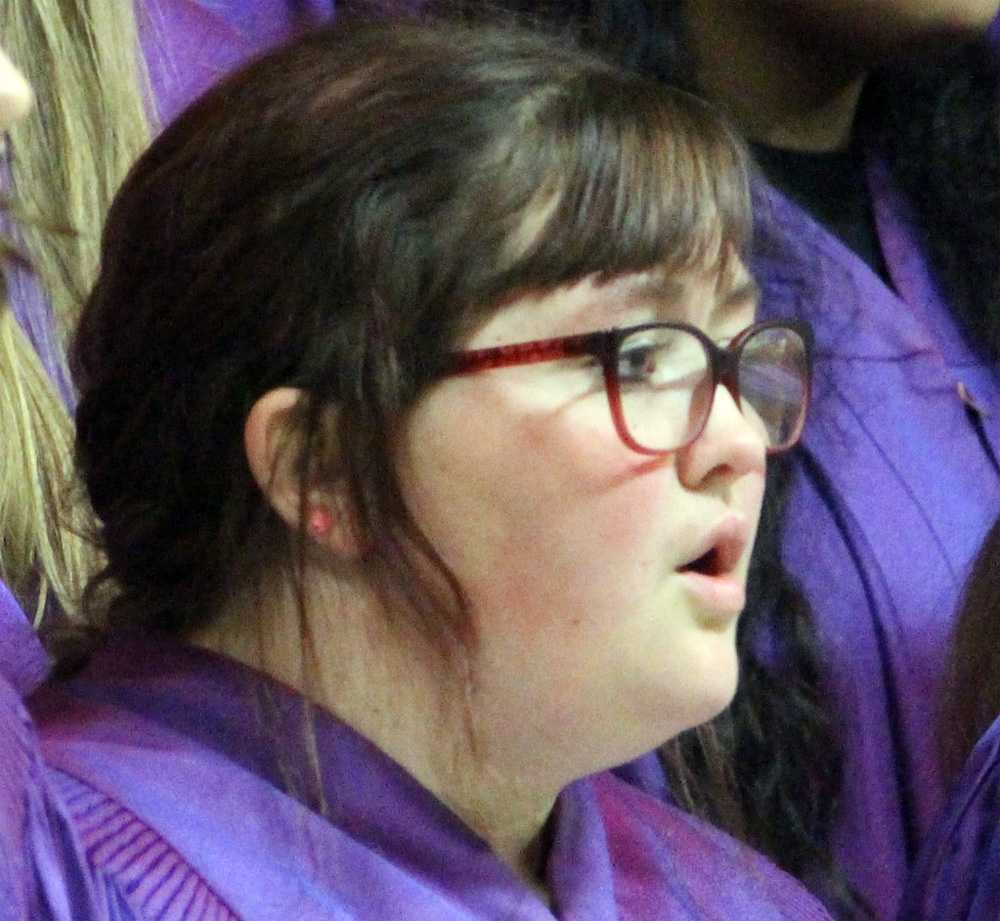 Talented and confident, Athina Wright has such high standards for herself that she still gets nervous singing for people.

[Editor’s note: The idea behind “Alphabet Stories” is to write one noteworthy athletics-related story about each OSAA-member school. We started with Adrian HS on Sept.18. Today’s story, two months later, is about Burns HS. The goal will be to write two per week. While we will be relying upon athletic directors to furnish story ideas, anyone may offer suggestions by emailing [email protected]]

Imagine being so filled with song that you could not contain it and had to sing all day long, whether at work, in class, at the mall or while seated at the dinner table.

Meet Athina Wright, a Burns High School senior soprano. She not only likes to sing; she can, according to Activities Director Erin Toelle, “Sing you right out of the room with a beautiful strong booming voice.”

Wright is part of the choral program – an OSAA-sponsored activity – at Burns and is so talented that she could one day be a pop star or opera diva or perhaps even both!  Originally from Redmond, she moved to Burns, a ranching community in the state’s heartland, at age 4 and brought her love of singing with her.

Wright joined her first choir class in seventh grade and discovered she was no longer “terrible” at singing.

“The teacher told me that I could go many places with my voice if I worked hard enough to get there,” she explained.

Working hard is not an issue according to Burns choir teacher Eric Zittel.

“Athina is the hardest worker that I have ever seen,” he said. “She is dedicated to excellence and she doesn't let anything stop her from achieving excellence. As a musician, she doesn't stop working until her music is second nature. Additionally she is a positive and uplifting presence in any classroom.”

Wright’s talent and commitment to her craft have taken her to Music in May at Pacific University and to the Avi Kaplan Choral Festival in Salem-Keizer, which have given her opportunities to be mentored by exceptional musicians and sing with other outstanding choir students. She also once sang at her eighth grade graduation and wowed with her version of the National Anthem at a Veteran’s Day assembly for the entire school district.

Wright continues to hone her talent daily, even as she works two separate jobs and works diligently on her school work.

“She loves music of all types with a passion I don’t see very much,” Zittel said. “She sings mostly pop and opera, but it wouldn’t take much for her to branch out to other listening/performing tastes.”

At present, Wright is focused on making a mark in the pop world. Upon graduation, she feels like it’s her destiny to be on “The Voice,” the highly-rated NBC singing competition.

“That’s going to take a lot of hard work,” she said. “After that I want to produce my own music, be on tour singing my music and have people be inspired by me. I want to show everyone that a small-town girl can work hard enough to have the world hear her.”