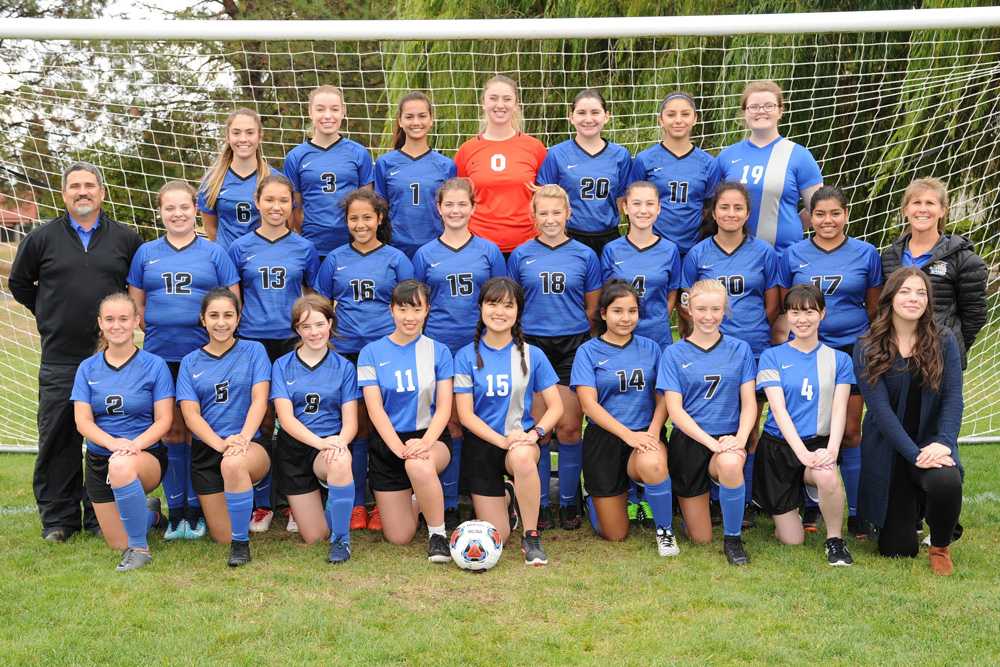 In '18, Blanchet Catholic girls soccer made lifelong memorie and the state semis with just three club players on its roster.

[Editor’s note: The idea behind “Alphabet Stories” is to write one noteworthy athletics-related story about each OSAA-member school. We started with Adrian HS on Sept.18. Today’s story is about Blanchet Catholic HS. The goal will be to write two per week. While we will be relying upon athletic directors to furnish story ideas, anyone may offer suggestions by emailing [email protected]]

In the fall of 2018, Tina Pearson had been coaching girls’ soccer at Blanchet Catholic long enough to remember the last time the Cavaliers reached the state semifinals. The year was 2001 and her team made it to the championship match before falling to small-school power Catlin Gabel, which was in the midst of winning 11 state titles in a row.

Seventeen years later, Blanchet was staring down an opportunity to reclaim a spot in the final four. The Cavaliers survived Portland Christian, 3-2 on penalty kicks, in the first round of the OSAA / OnPoint Community Credit Union 3A/2A/1A Girls Soccer State Championship, but their path to the semis was blocked by a familiar foe: PacWest Conference rival Yamhill-Carlton.

The teams had already played three times during the season and Blanchet had yet to win.

The Cavaliers would have to find a way…

For the past five years, Catlin Gabel and Oregon Episcopal School have met to decide the 3A/2A/1A state title in girls soccer. Indeed, since 2010, only three schools other than Catlin Gabel and OES have even appeared in the state championship match: Valley Catholic won in 2013; Westside Christian and St. Mary’s finished second in 2014 and 2010, respectively.

With Catlin Gabel and OES – their rosters stocked with club players -- so dominant, schools like Blanchet Catholic know that their Super Bowl is getting to the semifinals.  In 2017, OES routed Blanchet in the quarterfinals, the third straight year the Cavaliers had come up one win short of the final four.

In 2018, they had another shot. Yamhill-Carlton now stood in the way.

The first time Blanchet and YC faced off in 2018 ended in a 1-1 tie. Blanchet scored early but the Tigers equalized in the second half on a goal from their standout striker, German exchange student Nele Carolus.

“We had moments of grandeur and moments we broke down,” Pearson noted. “That girl [Carolus] took it to us.”

The third match was for the league title. It was close but Yamhill-Carlton prevailed by one goal.

“We went into that game knowing the outcome wasn’t going to deny us the state playoffs,” Pearson explained. “We had opportunities to put the ball in the back of the net but couldn’t do it.”

Blanchet Catholic, with just three club players on its roster, carried a 12-2-3 record into the quarterfinal match. The only blemishes all season long had come versus the YC team it had to beat to make history.

“It was an interesting year,” Pearson noted. “The willingness of our players to work hard together and help each other be successful by understanding their strengths and weaknesses and playing to those strengths is something we worked on all season long. We kept getting stronger and stronger.”

Preparing for the quarterfinal match, Pearson instituted some changes. She asked one of her main midfielders, sophomore Karla Fregoso, to mark Carolus everywhere she went.

“We knew she didn’t like pressure but was great if she had a lot of room,” Pearson explained. “Karla was a beast and the rest of the team picked up the slack. It all came together on the day of the game.”

For the first 15 minutes, Blanchet dominated and peppered YC’s keeper left and right but could not score. Finally, in the 20th minute, the Cavaliers broke through. A YC penalty gave Blanchet a free kick from the 32-yard line. All-league senior Brianna Anaya had been working all season on bending the ball around a wall. YC’s wall was still getting organized and the Tiger goalie wasn’t ready but none of that mattered. Anaya’s bender was perfect and found the upper right corner of the net. Not even the best prepared defense could have stopped it!

“It was the most beautiful shot I’ve seen in a long time,” Pearson said.

Determined to hold onto its 1-0 lead, Blanchet Catholic played with intensity and ferocity to the end. Fregoso did a terrific job on Carolus and, when she got loose, senior keeper Lauren Elmore was there to make phenomenal saves to preserve the shutout.

What did the win mean?

“It meant them finally getting a chance to get to the semis,” said Pearson. “Year after year in the quarters only to lose…for them to get over that hurdle, I think they took it as a challenge. They wanted to make history for our school.”

Three days later, Blanchet Catholic lost decisively to Catlin Gabel in the semifinals. So what? The Cavaliers made the semifinals, something they hadn’t done in 17 years. They’d reached their Super Bowl.

“If you were to ask them out of their four years what game do you remember the most, they bring up when we beat YC and shut their best player out,” Pearson said. “Even talking about it now gives me chills because that was a huge moment for our kids.”