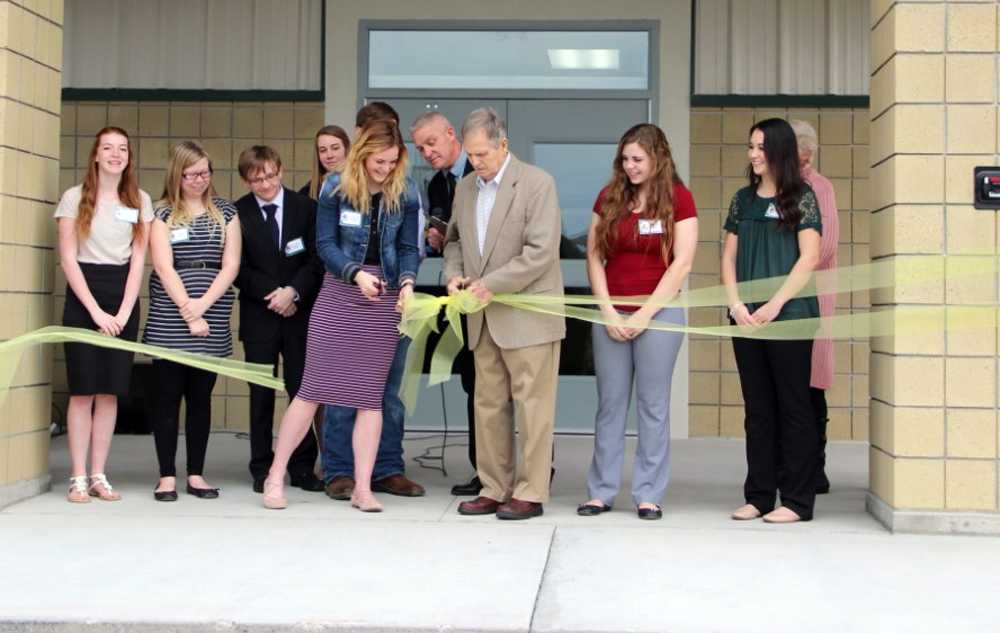 Gene Mills (center, in tan suit) presides over the dedication of the Adrian HS gym. Photo courtesy of the Argus Observer

[Editor’s note: Today, we debut “Alphabet Stories.” The idea is to write one noteworthy athletics-related story about each OSAA-member school, starting with the first in the alphabet, Adrian. The goal will be to write two per week. While we will be relying upon athletic directors to furnish story ideas, anyone may offer suggestions by emailing [email protected]]

On the second Thursday of February in 2018, Gene Mills presided over the dedication of the new high school gym at Adrian High School. It took five votes on the gym over almost 40 years before the levy finally passed. Mills, the school superintendent and girls basketball coach for 14 years, was instrumental in its passage.

“He continued to push the issue and lobby for the need,” said Adrian principal Kevin Purnell. “He kept it in people’s minds.”

Five days after the ribbon cutting ceremony, bone cancer took Mills at age 73. He’d given his life to coaching Oregon athletes, in basketball, football, track & field and baseball, for 50 years. The gym, featuring “Gene Mills Court,” was open. There was nothing more left to do…

Before the new gymnasium was erected, playing indoor sports and teaching physical education was a challenge at Adrian, a small farming community near the Idaho border in Southeast Oregon. The Antelopes’ old gym was so small that there was seating only on one side. Fans in the front row had their feet on the court. The other side of the court ended one foot short of the wall. There were only three feet separating the baselines from the front and back of the gym.

Mills, a lifelong teacher of athletics, advocated for the new facilities upon his arrival in Adrian. The most recent attempts to approve the levy had fallen just a few votes short before it finally passed late in 2016.

Less than six months later, after Mills’ cancer diagnosis, building the gym took on an urgency. The community sprung to action to help Mills realize his vision for the school. Labor was donated to prep the area and ground broke in the summer of 2017. The levy funds were insufficient to complete the project so a private donor contributed $300,000 to finish the project. Within six months, gym construction was complete. The Antelopes had a new gym. The community had a new source of pride. And Mills had the honor of seeing it open.

“He was just glad to have that for the community,” said Purnell.

One day after the dedication, Adrian hosted Burnt River for basketball. It was a full house. The new gym was immaculate. “Gene Mills Court” was inscribed on each end of the hardwood surface.

Mills hoped to be there to coach his girls team but he wasn’t well enough. Purnell coached the Antelopes to a 25-point win.

The following Tuesday, Valentine’s Day, Mills passed away. A few days later, a remembrance of Mills’ life was held. Fittingly, it was at the new Adrian gymnasium. More than 350 people attended; standing room only to honor the man who left his mark on Adrian High School in more ways than one.