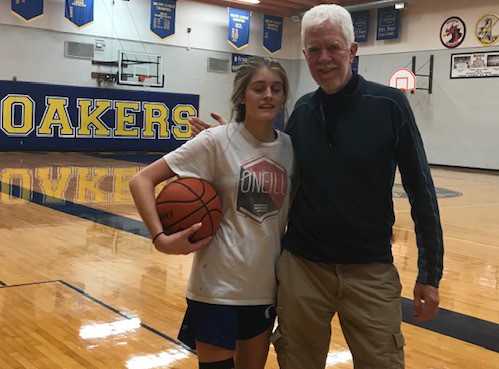 I am not completely sure why I am writing this. Well, that’s not totally true, but it’s hard to describe why I am. I’ll just write it, and maybe it will become clear after it’s written.

Coaching basketball is one of the hardest, most complex tasks I have ever undertaken. There are a million and one moving parts to a season, and just when you think everything is on a smooth, paved highway, up pops a sprained ankle, or a game film that won’t upload, or the flu bug wipes out half of your team. To borrow a line from the late Gilda Radner’s 1970s Saturday Night Live character, Roseanne Roseannadanna: “It’s ALWAYS something!” Add to that my advanced stage of senior citizenry, and, well, it can be tough.

As a coach, if you let yourself dwell on the tsunami of infinite details in a season, the swirling waters will drown you in seconds. Add to that the pressure to perform, and above all else, to win, and it can become overwhelming. As a former high school English teacher, I always liked to think that coaching is an extension of the classroom. But just as there are a million moving parts in teaching, coaching, with many applying the ultimate measurement of success in the season’s win-loss record, is different.

As a teacher, what carried me through the years was not the daily, well-oiled machinery of an English class where every student paid rapt attention, wrote beautiful, poignant essays, and found brilliant insight into The Scarlet Letter previously unseen. Most days felt not like life on Easy Street. No. This was mostly the Highway to Hell. But every now and again, some small something occurred to validate my time in front of 35 humans in various degrees of maturity: a written note on the bottom of an essay thanking me for accepting the paper late ( “…there’s just been a lot of shit in my life lately”); or the silent kid in the back of the room finally, timidly, raising his hand and offering his two cents in a literary discussion; or a student, with shaking hands and quavering voice, singing a song of her own writing, while strumming three chords on an out of tune guitar. Kids taking risks. Kids telling their stories. That’s what it was all about.

And so it is in coaching. I try to be observant and watchful for the small, but important, stories of a season. It is no secret that I have three reasons for being back in coaching: granddaughters Cora, Grace, and Fontelle. I coached Cora for two years (she’s now in her Master’s program at the University of Nevada-Reno); Grace for four years (now a freshman at the University of Oregon); and Fontelle, currently in her second season as a sophomore at Oakland High School. I came back for these three, and along the way I have met dozens and dozens and dozens of other smart, quirky, funny, squirrely, motivated, GREAT kids.

One of my favorite poems is William Stafford’s “The Way It Is,” where he declares, “You don’t ever let go of the thread.” It’s now perhaps one of the favorite poems of current and former players, and the metaphor has stayed with them. Once they grasped the thread of the team, the hard fought seasons, the commitment to the program, most have not let go.

Last night, in a cracker box gym in Drain, Oregon, I sat by Fontelle as we watched the JV game. She may have preferred the company of her friends and homies, but she stayed with me. We commented on the game in progress, but mostly we talked about other things in our lives: her research on Dr. Josef Mengele for an English project; my relaying to her how I used to teach Elie Wiesel’s Night; her news of her sisters (“Grace will be home tomorrow after her last final”); our shared laughter over a referee’s blown call in the game; both of us sharing the books we are currently reading: Fontelle’s Five Feet Apart and my The Overstory. Our own little book club discussion in the stands of a small, western Oregon high school. I dig it.

As a grandfather, how could I ask for more? It isn’t always easy coaching members of your own family, and I know that many times my name has been used in vain by these three after a grueling practice, where I barked, and barked, and barked. But I think mostly it’s been a worthwhile time.

Certainly, winning in coaching feels great, and right now we are searching and struggling to find the right combination of plays and players to that end. This team is improving, and everyone sees it. And as they continue to come together as a cohesive unit, I will attempt to be mindful of all the little stories that emerge over this marathon season. Then, maybe the long, cold bus rides, the two-hour practices, the late night McDonald’s dinner at some little Oregon burg, the endless ankle tapings, will all be worth it.

It’s the thread, you know?

﻿**The best thing I have experienced (so far) in Oregon High School sports is a feature that will run every Friday during summer. Anyone wanting to submit an essay (no more than 600 words; current player or coaches preferred) may email their essay to [email protected]. We will publish the 12 best we receive.