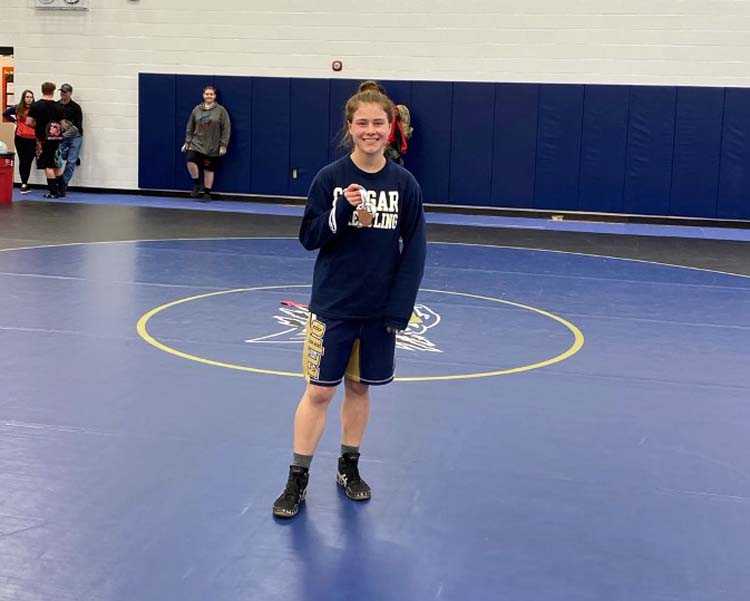 [Editor’s note: “Take Five” is a recurring feature designed to offer a quick look at some of Oregon’s most interesting high school sports standouts. Today, we meet Kaitlyn Lemmon, a senior at Stanfield who runs cross country in the fall and has been a state qualifier in shot put and the sprint relays in the spring. This winter she decided to try wrestling for the first time, following in the footsteps of her little brother, who’s been doing it since he was 4. She finished first in her initial girls’ meet and has since taken second place twice. We asked Lemmon to answer five questions from the 25 we sent her way. This is what she said…]

OSAAtoday: If you are reading a book outside of school, we’d like to know what it is and what you like about it.

Kaitlyn Lemmon: I am reading ‘The Lost Boy’ [David Pelzer. ]I like that it gives the perspective of a child in the foster system. We had some foster kids before, so I like how I can see kind of what they might have been thinking or feeling.

Lemmon: I would be the worst at figure skating. Those who do figure skating are usually pretty flexible and I’m not very flexible at all. Plus I can ice skate, but I haven’t really got the whole stopping thing down. Figure skaters do things like spin superfast and then stop gracefully. I would have trouble stopping so I would end up falling or hitting the side of the ice rink.

Lemmon: The scariest moment while learning to drive was probably when I took a corner to fast. I just got my permit and I was driving, but there was a sharp corner I needed to take. The only thing is I didn’t slow down at all so I ended up on the side walk. The entire time I was just thinking, “What if someone was standing there and I hit them?” I could not get that thought out of my head the rest of the time I was driving that day.

OSAAToday: You can blink and be transported to any place in Oregon for a day. Where do you go and why?

Lemmon: I would go to Cape Lookout on the Oregon Coast because even during high tide there is lots of sand to go on. Not far from there, there are huge sand dunes, caves, and a spot where the water is kind of blocked in and there really are not a ton of waves there, so you can actually go swimming without having to worry about the tide pulling you out. I love swimming in the ocean and trying to jump over the waves. The ocean is just so powerful and beautiful.

OSAAtoday: If you could have one superpower, what would it be and why:

Lemmon: I would want super speed because you could get to anywhere you wanted in a matter of seconds. You could also run on water because of how fast you can go. This would be a huge advantage in pretty much any sport.