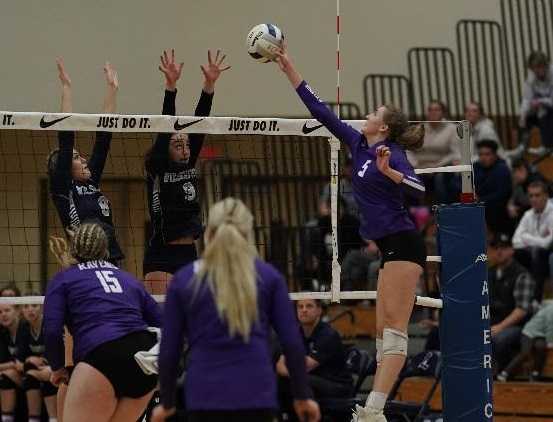 HILLSBORO – The Ridgeview Ravens spent the past 12 months thinking about how close they came to a volleyball state championship last year.

So when they hit the floor Saturday night against Wilsonville in the final of the OSAA/OnPoint Community Credit Union 5A tournament at Liberty High School, they weren’t going to be denied.

The top-seeded Ravens (25-4) stormed past the No. 2 Wildcats, serving and blocking them into submission for a thorough 25-19, 25-17, 25-22 win. It is the first state title for Ridgeview, which was runner-up to Corvallis a year ago.

“After seeing how close we came last year, that was the only thing on our mind, was coming back and finishing it this time,” Ridgeview senior outside hitter Rylee Troutman said. “We were super confident. We stayed composed and humbled.”

Ravens coach Randi Viggiano said that last year, when they made a surprising run to the final, made her team more determined this season.

“We got a little taste of what that felt like, and we didn’t like how we left,” Viggiano said. “We wanted to see how that felt, and from Day 1 this has been our goal. They just have so much belief. They were focused and they were composed.”

Wilsonville (23-3), which lost in the quarterfinals last year, also was going for its first title. But the Ravens were just too much for the Wildcats to handle.

“They really challenged us in ways that we haven’t been challenged before,” Wilsonville senior outside hitter Lindsey Hartford said. “They were a very, very solid team, and they tested our defense and our blocking. Some of our unforced errors definitely didn’t help us. We kind of errored ourselves out of that game a little bit.”

The Wildcats didn’t have an answer for the powerful Troutman, who has committed to play at Corban University. She had five kills in each of the first two sets and nine kills in the final set.

“She’s our go-to,” Frost said. “She can put it down when she needs to, and she knows that.”

Viggiano said she is proud of the growth she has seen in Troutman as a player and as a person.

“She’s been such a leader on this team,” Viggiano said. “Last year, we leaned on her, and this year we were able to balance our offense a little bit more, which allowed her not to try to do anything special, just to go be her.”

Troutman said the team’s improved balance made the difference this season.

“We had so many people to set across the net that teams weren’t sure who to shut down,” Troutman said. “We just had such a strong offense.”

The Ravens took their game to another level in the last two weeks as they focused more on serving and blocking, according to Viggiano.

“When we serve tough, we’re good,” Viggiano said. “When we don’t serve tough, we let teams compete. Our serving and blocking both showed up this weekend.”

Ridgeview did not lose to a 5A team this season. The Ravens’ only defeats came against 6A teams Sheldon, South Eugene, North Medford and West Linn.

“What helped us is we have a tough conference,” Frost said. “We knew we could beat anybody in this tournament.”

For Frost and Henry, it is their second state championship this year. Frost and Henry were the starting pitcher and center fielder, respectively, on Ridgeview’s softball state title team.

Wilsonville got 11 kills from junior Clarissa Klein, seven kills from sophomore Ashli Edmiston and five kills from Hartford. But they never were able to find a rhythm against the Ravens.

“Some of us are so intense, and that intensity can be really good or really bad,” Hartford said. “Sometimes when you cross that line, it hurts the team a little bit when you’re a little too fired up.”