6A, 5A volleyball: Jesuit, Central Catholic to collide in final
Tweet
No. 1 Crusaders, No. 2 Rams are tested in semifinals; revenge-minded Ridgeview advances to face Wilsonville in 5A
November 9, 2019 by Jerry Ulmer, OSAAtoday 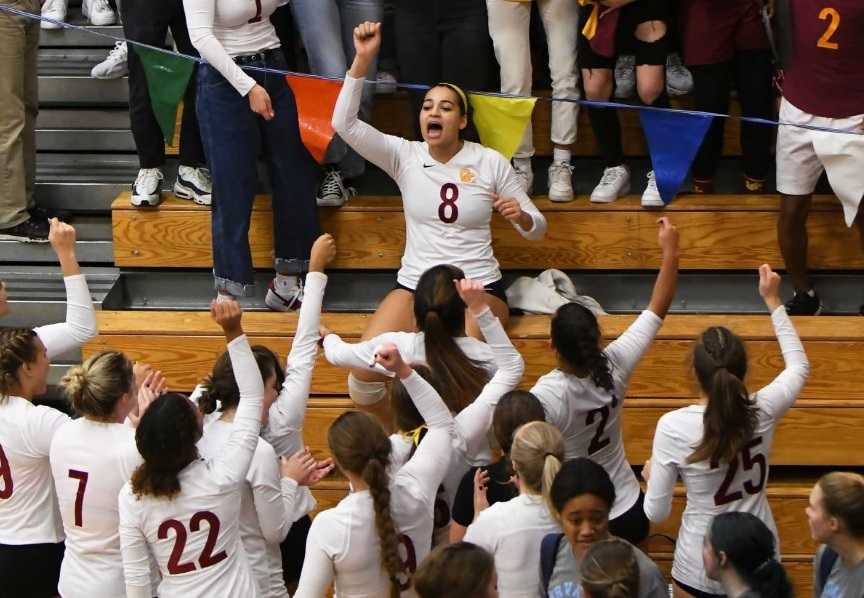 HILLSBORO – No. 1 Jesuit and No. 2 Central Catholic survived semifinal upset bids Friday to advance to the championship match of the OSAA/OnPoint Community Credit Union 6A volleyball tournament at Liberty High School.

“I wasn’t too worried, but they had a good lead,” Jesuit coach Teresa Zimmerlee said of falling behind West Linn. “All year we’ve stuck it out and came back. … That was fun. I was a little stressed, but that was fun.”

“We kept grinding and grinding and came from behind,” Lorenz said. “Today we beat a very gutty Canby team, and it took every ounce we had.”

Lorenz, who is coaching in his 44th and final season, will appear in his 24th state championship match and go for his 12th title. He said Canby coach Terri Jo Schlatter had a message for him after the match.

No. 2 Wilsonville and No. 1 Ridgeview will meet in the 5A final at 6 p.m. Saturday at Liberty.

Wilsonville outlasted No. 3 West Albany in the semifinals to win 25-15, 23-25, 21-25, 25-16, 15-5. The Wildcats got contributions from all around, in particular Clarissa Klein, who “had kills from every position on the floor,” according to coach Nathan Blankenship.

Blankenship said that West Albany is “a tough, talented team. They made us make adjustments and we capitalized on those. It was the determination of the girls to win each and every point that pushed us over the top.”

“I was really proud of our perseverance,” Ravens coach Randi Viggiano said. “We were mentally tough.”

Rylee Troutman had 27 kills and Susanna Bailey had 13 kills for Ridgeview, which also got plenty of support from Nicole Bossemeyer (seven kills), Allicitie Frost (six aces) and Ally Henry (21 kills).

The Ravens were highly motivated to get back at the reigning champion Spartans.

“We wanted redemption,” Viggiano said. “We knew they didn’t see our best last year. I was really excited to see us battle through.”