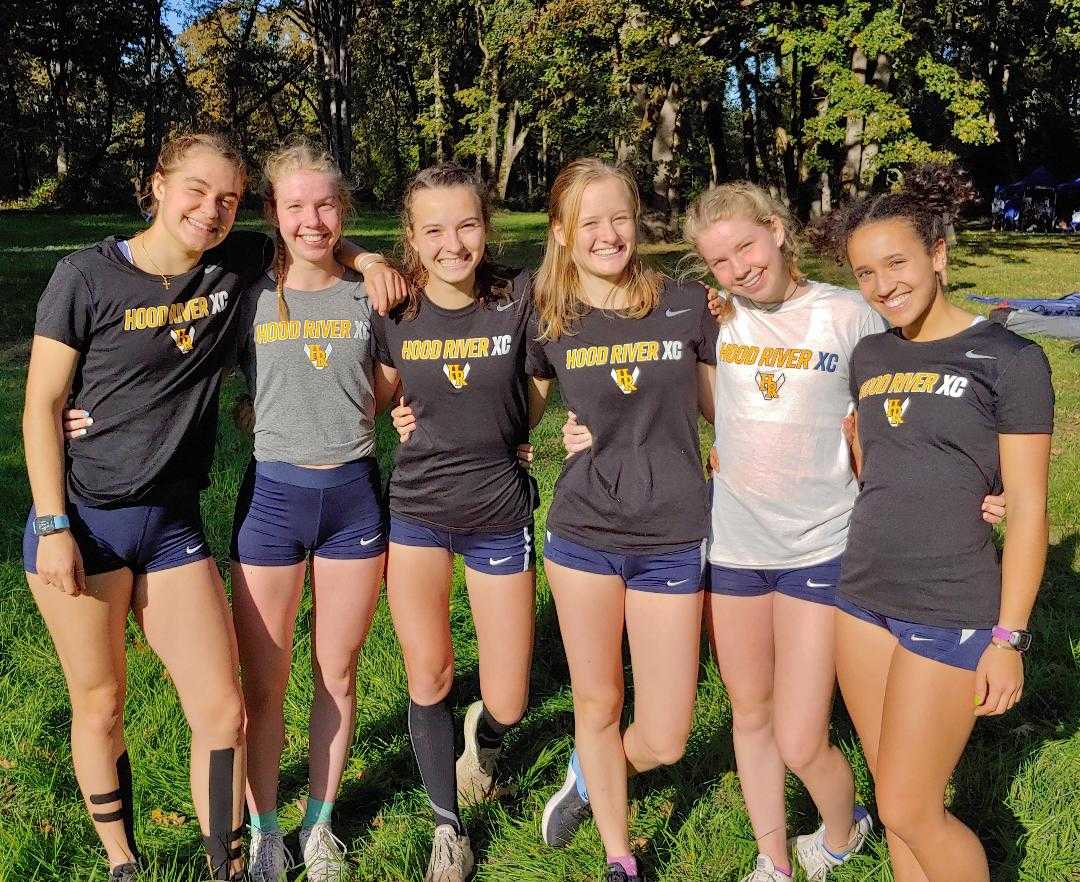 Hood River Valley's girls are No. 2 in the 5A coaches poll, behind Corvallis.

CHAMPOEG -- In the shade of oak trees, Frances Dickinson took a glance at her Hood River Valley teammates on the starting line Friday.

"I looked to my right and left and thought, 'We're going to do this as a team.' Cross country is a team sport and sometimes people forget about that," she said. "It comes down to how you support one another as a team."

For the HRV girls, reigning 5A champions, the bonds of friendship and family extend beyond the running trails and track intervals. The collection of personalities and talents that comprise the team are something special.

In the middle of the Champoeg Invitational, as Hood River Valley ran to fend off a challenge from North Salem, Dickinson was thinking about teammate Lottie Bromham.

"There was a strip of pavement for a mile and it was hot, and I thought of her because I knew she was fighting," she said.

Bromham was diagnosed with Vasovagal Syncope about a year and a half ago. It's an autoimmune disease that creates havoc in the signals between the heart and brain. When her heart rate goes up, her blood pressure drops and she begins to lose oxygen to her brain. It can cause her to get dizzy and even pass out and the condition is exacerbated by heat.

Last November when Hood River Valley won its first state cross country championship, Bromham lay prone near a tent with her parents for 30 minutes while her teammates celebrated. The condition is not dangerous, unless she were to fall and hit her head. But after reaching the finish line she was so woozy that she fainted and had to have immediate help out of the chute.

Her team, coaches and meet personnel do what they can to prepare for Bromham to collapse.

"The last thing I remember was being on the starting line," Bromham said. "In the first 200 meters I knew it was going to be a bad day."

Still, she finished. And despite the sacrifices she has to make at practice, and within races, she insists that running for the team is worth it.

"Lining up with these girls is incredible and it's worth everything," Bromham said. "It's worth passing out for an hour."

That level of dedication inspires her teammates. With medication and a better understanding of how to manage her body, though hydration, sodium intake and a cooling vest, Bromham is having an easier go of it this fall. She finished third for her team on Friday at Champoeg.

"She is purely inspiration for me," said Josephine Dickinson, Frances' twin sister, of Bromham. "It's been a huge battle for her and yet it's something she can overcome. But I think 'If Lottie is out here working hard, then I can be out her working hard.'"

Eva Jones is a senior on JV who ran her fastest 5K in two years on Friday.

She is also started the Girl Up club at Hood River Valley two years ago and is a strong voice for empowerment, gender equality and making a difference in her community.

"For me, everything really comes down to educating women and girls," Jones said.

The Girl Up club at Hood River is up to 55 members including most of the girls cross country team. Jones' advocacy and leadership has helped club has raise $38,000 in two years as it promotes causes within the school, makes donations to a local women's shelter, and also seeks to impact global issues.

"It's really cool," Bromham said. "It goes to show that we all love running but we can use all that passion and drive we've learned from training for cross country and track and apply it to everything else. The work (Jones) has done around the school and community, it's an extension of cross country."

Celia Acosta, another senior, is a semifinalist for National Merit Scholar, a member of the Homecoming court, and another source of inspiration on the team.

After a promising freshman season, Acosta's performances dipped as a sophomore and junior. On Friday, she ran a 5K personal best for the first time since 2016.

But what she cares about most is helping a younger athlete understand things better, or being supportive of her teammates.

"We're like family. We have separate friend groups, but I am so stoked to go to practice and spend time with my team," Acosta said. "Every emotion a person can feel, they've seen all of that (from me). We're closer than any team at our school."

Chloe Bullock, a junior, was the No. 5 runner on last year's championship team even though her natural events on the track are the 400 and 800.

Bullock had a chance to go to France on an exchange program this fall, but didn't want to miss cross county season. She spent a smaller chunk of time, over the summer, in France instead.

She also directs 80 elementary school kids in twice-a-week cross country practices in Hood River. She does all of the planning, parent communication and organizing to make it happen during a five-week stretch of the season.

Bullock is another leader, known for her strength and durability. While others on the team have been hurt or sick, she is something of a rock. A guidepost.

"Everything about Chloe makes me laugh and so happy," Josephine said. "She has pushed herself hard (to be a distance runner). When I see her get through a hard day, I feed off her energy. It motivates me."

The twins have been the focal point of the team's competitive success. Fran won the 5A final last year and Josephine was fifth. That powered the team to victory.

But their relationship has evolved over time. Two years ago, the competitive nature of the sport and the indelicate nature of comparing times led to bickering.

"Sophomore year we had that gnarly competitiveness and it was not good," Frances said. "We have learned to be happy for one another as a person and treat each other like best friends rather than sisters."

In July, Frances and Josephine split up and went on 28-day wilderness backpacking trips through a summer camp program. Frances trekked through Idaho's Bitterroot-Selway Wilderness and Josephine hiked through the Wind River Range in Wyoming.

It was the longest the twins had ever been apart and it was an exercise in becoming self-reliant and independent before they split up for college.

"I have learned that a win for Fran does not mean a loss for me, or a win for me is not a loss for Fran," Josephine said. "She is my training partner, my best friend, my twin sister."

Twin sister, but not only sister.

"We've all been running together since middle school," Bullock said. "We all think of each other as sisters. And that's a really big thing."