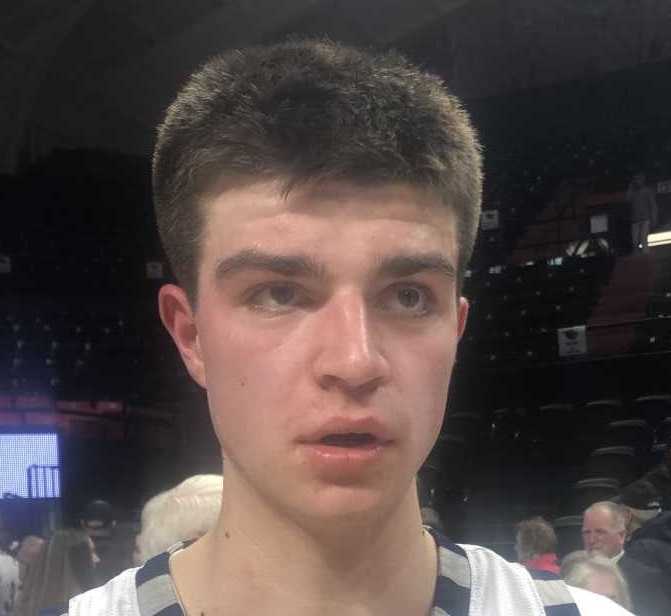 CORVALLIS -- For the fifth consecutive year, the Wilsonville Wildcats will play for a 5A championship.

The No. 2 Wildcats topped No. 3 Silverton 50-45 in the semifinals of the OSAA / OnPoint Community Credit Union Class 5A boys basketball tournament Friday at Gill Coliseum, and it was an instant classic.

Wilsonville senior point guard Jack Roche hit a layup with 1:08 left to regain the lead 45-43, and then things got weird.

With 29.6 seconds left, Wilsonville’s Zachary Rivers missed the front end of a 1-and-1 bonus foul shot, but the ball caromed off a Silverton player for the Wildcats to retain possession.

Before the ensuing inbound, Silverton’s Josiah Roth was called for a push, and it was deemed intentional by the officials and a technical foul was assessed. Roche coolly hit the foul shots -- he was 0 for 5 from the line prior -- and then Dakota Reber knocked down a pair to make the lead 49-43 with 25.8 seconds left.

Silverton had a play drawn up out of a timeout, but Grant Dunn’s corner three-point attempt was blocked, Wilsonville rebounded and iced the game.

“We’ve been resilient all year,” Wilsonville head coach Chris Roche said. “Every time we’ve been punched, we punch right back. I’m so proud of my guys.”

It was really a shame someone had to lose. While it wasn’t a masterpiece by both teams, it was one of most competitive games of the tournament.

Silverton big man Levi Nielsen, who sat the bulk of the first half with foul trouble, provided a spark with a three-point play to draw the Foxes within a point, 42-41, with 3:27 left. Silverton then took the lead on a pair of Jonah Downey foul shots with 1:46 left, but Wilsonville’s Keegan Shivers tied it with a foul shot 15 seconds later.

Wilsonville’s Sam Westig made the defensive play of the game at the 1:16 mark with a steal, which led to Roche’s go-ahead bucket at the other end.

“We were loose with the ball, had a horrible time at the free throw line, and we’re usually a good free throw shooting team,” Coach Roche said, “but where there was a loose ball or rebound, we fought. I’ll hang my hat on that any day.”

Neither team was good from the foul line, so in a sense it balanced out. Wilsonville finished the game 11 for 23 and Silverton was 9 for 16. The Wildcats shot 19 for 41 from the field while Silverton was 17 for 41, and the teams combined to shoot 3 for 21 from three-point range.

The style points were few and far between in the game, but like Roche said, toughness was the theme. Wilsonville won the rebound battle 33-23 and blocked four shots, and both teams committed 13 turnovers.

Despite being in foul trouble, Nielsen turned in a great game for the Foxes. He finished with 11 points and 11 rebounds and was a presence inside that was sorely missed when he was on the bench. Downey finished with a team-high 16 points, eight coming from the foul line,

The drama didn’t wait for the fourth quarter. At the end of the first half, Wilsonville’s Gabe Reichle hit a fall-away three-pointer that the officials initially counted, although it was released well after the red lights on the backboard lit up. The officials conferred and waved off the bucket to keep the halftime score at 21-18 Wilsonville.

Reber finished with a team-high 16 points on 7-of-9 shooting with 10 rebounds, and one of his buckets came when his team needed it the most. Reber ended an almost six-minute scoring drought in the second quarter with an emphatic follow-up dunk in transition to give his team a 17-13 lead, and more importantly, some energy.

Silverton tied the game at 7:03 in the third with a Drake Ulven three-pointer, but Wilsonville scored four quick points to regain the lead and hold the Foxes at bay. With each Silverton rally, Wilsonville always seemed to have answer.

No team in OSAA boys basketball history has made it to five consecutive title games, and it certainly wasn’t easy for the Wildcats to be the first to accomplish the feat. Silverton was just as deserving to advance as the Wildcats were, but in the end, Wilsonville found a way. The Wildcats will play No. 1 Churchill for the state title at 3:15 p.m. Saturday, and Roche knows how good the Lancers are.

“We’re going to have to be even better tomorrow,” Roche said. “We’re playing a great team tomorrow.”

No. 1 Churchill 63, No. 4 Willamette 43: Churchill’s balanced offense attack and stout first-half defense lifted the Lancers to a win over Willamette in the semifinals Friday.

Four Lancers scored in double figures, and Churchill held Willamette without a field goal for about eight minutes in the first half, from 2:45 in the first to 2:41 in the second after the Wolverines’ Alex Puckett scored a layup.

Churchill junior forward Brian Goracke scored 15 of his game-high 17 points in the first half, and the Lancers led 32-17 at halftime.

Willamette couldn’t find its groove offensively in the first half, shooting just 4 for 23 from the field and 1 for 5 from three-point range. The Wolverines’ three-pointer came from Jacob Curtis, and it was the team’s first field goal. Willamette was 9 for 30 from the field in the second half.

For the Wolverines, Luke Smith finished with 11 points on 4-of-12 shooting and Curtis had eight points and five rebounds.