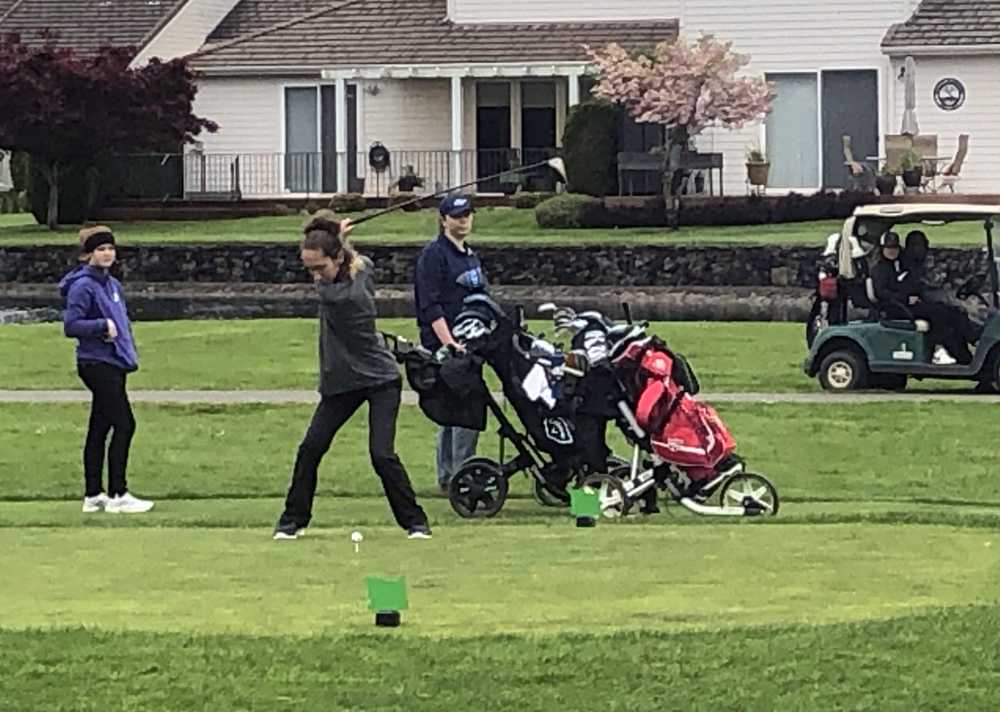 The 65 tied the 18-hole record set by South Salem’s Ellie Slama in 2017. It also matched Ly’s career low round.

As good as it was, Ly’s round could have been even lower. She missed a short birdie putt on 11, lipped out a birdie putt on 17 and twice on the back nine – where she shot five under 31 -- recorded two-putt birdies.

“It was a good round,” Ly said. “I think the front nine was a little bit shaky. I was nervous. The back nine I was starting to make my putts and my shots were going where I wanted to.”

Ly said that her personal highlight was driving the green on the 249-yard, par 4 15th.

“I did that in a practice round yesterday and it gave me a lot of confidence that I could do it today,” she said.

Ly, who drives the ball straight and 270 yards on average, overpowered a short course known for its dog legs. Nine of the 10 par 4s registered less than 300 yards.

“Because it’s so short I’m able to go over a lot of the trees,” Ly explained. “That’s a big advantage for me.”

After a morning in which 5A golfers were vexed by cool, wet conditions, a sneaky wind and elevated greens that were hard and rolled fast, 6A golfers were greeted with more benign conditions. That made for great scoring. A whopping 18 golfers made the turn after their first nine with scores of 39 or lower.

Three of those golfers, Jesuit’s Anna Poulin, Beth Milne and Katie Lee, finished with rounds in the 70s, putting the Crusaders, who won state the last two times it was contested officially, in 2018 and 2019, squarely in contention in the team competition, just seven shots back. Lee’s round was highlighted by an eagle on the par 4 15th, where she hit a tree on her drive and then holed out from 150 yards. Poulin shot even-par 72, a personal best in a tournament, and came within a lip out on 18 of going one lower.

“It was a lot of fun,” Poulin said. “The weather was good. The greens were rolling good. It was a good day.”

Poulin’s highlight came on the par 5 13th. After a long drive that snuck into the rough, the junior hit her approach from 175 yards just short of the green, then got up and down for birdie.

In addition to the three rounds in the 70s, Jesuit’s other two golfers shot rounds of 94, underscoring the depth of this Crusader team. It’s that depth that co-coach Michele Gray hopes will help the Crusaders prevail tomorrow.

“It was an up and down day,” Gray said. “Good front nine, a little harder on the back nine. We have some stuff we can correct for tomorrow.”

Gray added that she was not concerned with Jesuit’s placement after the first day.

“We’re concerned about kids feeling confident and playing within themselves and controlling their strokes on the course,” she said. “No big numbers. Our strategy is to keep our spirits up, keep confident and let them know that we believe in them.”

“We have pretty high expectations,” Poulin said. “We want to have fun but we want to come out of here with the win.”

“She was able to get up and down the last few holes,” said Mountain side coach Merritt Richardson. “That really helped out on her score.”

Fueled by Fuenmayor and sophomore Katherine Shinn’s 88, her best competitive tournament round; Mountainside, which edged Jesuit to win the 6A/5A State Preview on April 28 by three strokes, held a seven-stroke lead after one round in the team competition.

“I love how they came out calm and confident and played really steady,” Richardson said. “All of our players brought their best game today.”

Richardson said the plan for tonight was to have some fun, remain calm and confident.

“We’re going to see if we can come out tomorrow and do the same thing,” she said.

Three Rivers League teams West Linn and Lake Oswego also have a shot at the team title tomorrow. Highlighted by Brundage’s 75 and a 79 from Kylie Zeman, West Linn finds itself 16 strokes behind Mountainside. TRL league champion Lake Oswego is another three back. The Lakers had the most consistent golfers, with their four scoring players shooting between 81 and 85.

Girls 5A: Wilsonville in command

Wilsonville rode a personal-best 78 from senior Paris Wilhelm to a 21-stroke lead over Silverton after Day 1 in the team competition. The Wildcats are seeking their first title since winning for the first time in 2017.

In addition to Wilhelm’s six-over-par round, Wilsonville got scoring rounds from Mia Combs (95) Emma Dougherty (99) and Madeline Downie (100).

“Paris exceeded what we expected; the rest are matching what we expected them to do,” said Wilsonville fourth-year coach Chris Bensel. “They’ve worked really hard these past two weeks getting ready for this.”

Wilhelm, a transfer from Nestucca, which did not field a golf team in 2021; shot a front nine 40, but was two better on the back. Going off with the first group, the senior was even par through six holes, but played the next six holes in six over par. Wilhelm closed strong, playing her final six in even par, including a birdie on the short par three 17th.

“I hit a wedge to about 10 feet from hole and I just gave it the right tap,” Wilhelm said.

“I was super happy with how I played,” Wilhelm added. “The course played so nice. The greens are insanely fast but the course is in such a good condition.”

Bensel said that he did not expect his crew to get too excited holding the team lead overnight.

“They’re pretty loose,” he said. “They’re a great group of girls. I’m sure they’ll be loose.”

Wilhelm found herself in second place in the individual chase after the first round, one stroke ahead of tournament co-favorite Mercedes Marriott, who shot a seven-over 79. Both remain within striking distance of freshman Francie Tomp of North Eugene, who birdied two of her final three holes to fire an even-par round of 72.

Tomp, who started on the tenth tee in the last group of the day; finished with four birdies on the day, including three on her back nine. After opening with a 1-over 37, Tomp birdied the first to get to even, then made up for bogies on four and six by making birdie on seven and eight. Tomp hit a tree with her drive on the short par 5 seventh and had to punch out. But she hit a sparkling 58 degree wedge that danced around the hole for a kick in birdie, then made an eight footer for birdie on the par 4 eighth. Tomp finished off her round by scrambling for par on the ninth, capped by a seven-foot par putt that went in the center of the cup.

“I was extremely nervous,” the 14-year-old admitted. “I knew wanted to shoot at least par, so making that last putt was really important to me.”

An exceptional putter, Tomp found the greens at Emerald Valley to her liking all day.

“The greens were quick today,” she said. “Nice and firm and good to putt on.”

Tomp said that she’s not focused about winning the tournament.

“My mentality was to go and have fun,” she said. “Since I’m just a freshman, I didn’t want to worry about what happens.”

Tomp said that she’s going to forget about today’s round and just play on Tuesday.

“Tomorrow’s going to be a new day,” she said.