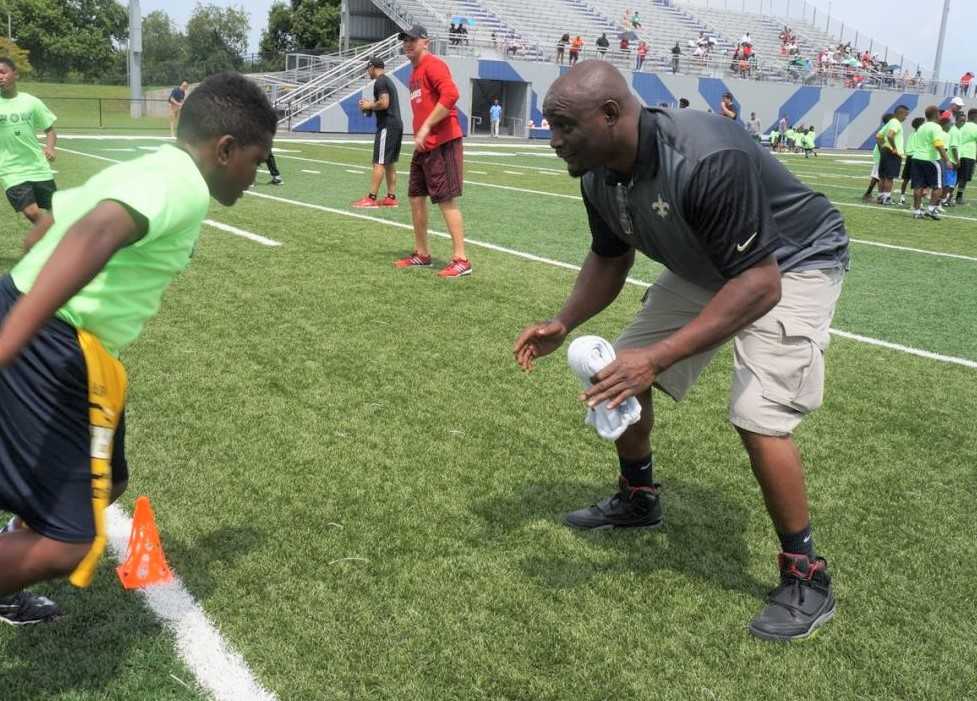 It took former Oregon State linebacker James Allen a while to find his niche after his four-year NFL career with the New Orleans Saints ended in 2005.

“I wasn't prepared for life after the NFL,” said Allen, a 1997 Jefferson graduate who is a member of the PIL Hall of Fame. “Like most NFL athletes, most young guys, I thought my career was going to be longer than it was.”

But after returning to Oregon State in 2010 to complete his degree, Allen discovered his purpose in the field of education. And now he's ready to take another big step.

Allen, who periodically assisted in youth and high school football programs in Louisiana for the past decade, has landed his first high school head coaching job. He is returning to the Portland area as the coach at Gresham, where he will succeed Mike Melton.

“This is a whirlwind. I'm still in shock,” Allen said. “Me coming back home, honestly, this is a blessing. This is going to springboard me into a new sense in life. I've been needing this next challenge in life since I left ball. The passion to give back and to coach has always been in me.”

Gresham athletic director Ty Gonrowski said he believes Allen is going to make a big impact at the school.

“We're very excited to get James on staff, not only because of his football pedigree, but also, he's the kind of guy you want around your kids,” Gonrowski said. “He seems like somebody who will inject energy into not just the football program, but the whole building and the Gresham community and the Gopher family.

“I'm excited to see when he's here and on the field and in the building, the reaction from kids, because I know kids are going to love being around him and love being coached by him.”

Allen has worked at charter schools in the New Orleans area for the past decade, serving as a behavior dean, teaching PE and coaching football. He has helped out with youth football programs and spent three seasons as a high school assistant coach, two at KIPP Renaissance and one at Livingston Collegiate Academy.

Most recently he has worked in the ReNEW Therapeutic Program, an alternative school for students who have experienced severe trauma or emotional disturbance.

“I've been pouring out my heart and my soul to these kids for the last decade,” Allen said. “I cannot wait to come home and be able to do the same thing, and also coach football, at a program like Gresham. I feel so blessed, I cannot really put into words how I really feel. It's exuberance, it's excitement, and there's a little bit of trepidation, because I'm a first-time head coach.”

“I've been trying to find that next opportunity,” he said. “There have been other opportunities in Oregon for me to go back and coach, but I haven't taken them seriously because me personally, as a man, my life wasn't on track.

“I always wanted to coach in a real capacity, but I just didn't want to come home and be in the wrong situation, or put myself in a situation where I wasn't prepared to give my all.”

Allen takes over a Gresham program that has struggled in recent seasons. The Gophers haven't finished with a winning record since 2012 and haven't won a playoff game since 2001. They were 1-8 in 2019 and 1-3 last season.

Melton, who has coached in the program for 28 seasons, stepped down after going 11-29 in five seasons as head coach. He has stayed on to help run offseason workouts until Allen's scheduled arrival Friday.

“We've connected already,” Allen said of Melton. “He said I have his full support.”

Allen is hoping to reconnect Gresham to its winning past. He recalled losing to the Gophers 32-14 in the 1995 state playoffs when he was a junior at Jefferson, and noted how the demographic in Gresham has changed since that time.

“The Gresham area is basically north Portland now,” Allen said. “I definitely understand that aspect. That's going to be a blessing for me. I think with that change in Gresham, I'm going to be an asset to the team, to the school culture. It's what I've been doing. It's a part of who I am.”

Allen has four children. His oldest, Jontae, graduated from Mountainside in 2020 and walked on as a linebacker at Oregon State, where James is held in high regard as a member of the 2001 Fiesta Bowl team.

“Jontae chose the warrior's path, and I couldn't be more proud of my son,” James said. “I think he can definitely make the team.”

Allen's other three children live in New Orleans. His son, Jakeih, and daughter, Aajeh, will be a junior and sophomore, respectively, in high school this year. His daughter Kynzi will turn 4 in August.

Allen said it is uncertain whether Jakeih will move to Oregon, but his daughters will stay in New Orleans.

Allen said he hopes to put his coaching staff together in the next two weeks. He expressed confidence in the support he is receiving from Gonrowski and principal Drake Shelton.

“The interview process, it felt like family instead of an interview,” said Allen, whose role in the building is yet to be finalized. “It's going to be a beautiful thing we're building at Gresham. I can't wait to get in the building and work with these people.”