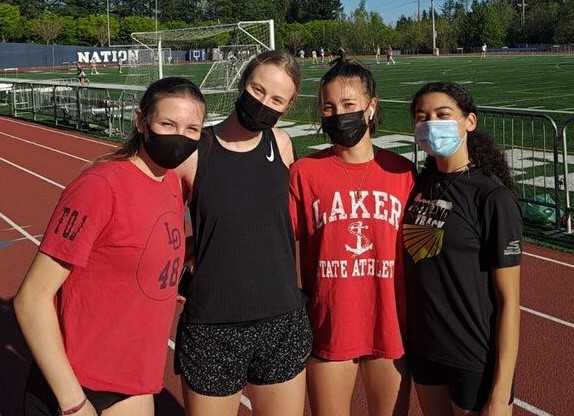 It took exactly one meet to learn that the buzz about Lake Oswego's talented freshman girls sprinters – led by star-in-the-making Mia Brahe-Pedersen – was justified.

Entering the second week of competition, the Laker rookies dominate the state-best list. Brahe-Pedersen is at the top in the 100 and 200 meters after setting freshman state records in both events. Freshman Josie Donelson leads in the 400. And Brahe-Pedersen, Donelson, freshman Riley Ha and sophomore Chloe Collier recorded the No. 1 time in the 4x100 relay.

Not a bad debut for the much-anticipated newcomers.

“I've known about these guys for a while,” Lake Oswego coach Vince Kinney said. “I've been pretty excited to see them come to the high school. It's been a joy to have them on the team.”

Brahe-Pedersen enters the Lake Oswego program highly decorated. In the AAU Indoor National Championships last month, she was first in the 60 and 200 and third in the 400 for the 15-16 age group.

Also, Kinney said, Brahe-Pedersen doesn't get caught up in the hype.

“She's humble. She doesn't like it when people recognize her,” Kinney said. “She's a good teammate when it comes to that. That is going to set her up for being a good leader for this team in the future.”

At 5-foot-9, Brahe-Pedersen has a longer stride than most sprinters. She has been particularly strong in the latter stages of races.

“Where she needs improvement is her start,” Kinney said. “Once she gets her start down, that will make her a more complete sprinter.

“She's pretty hard on herself. She wants to be the best she can be. I think having her understand that there's so much more time in her track and field career at Lake Oswego, she's got time to do some special stuff.”

The 4x100 team, with Brahe-Pedersen running the anchor, was clocked at 49.27. The time is No. 9 all-time at Lake Oswego, and considering they had only a week and a half to practice hand-offs, they are likely to challenge the school record of 48.36, set in 2018.

“I think they can improve by a second, and second-and-a-half,” Kinney said. “There were a couple hand-offs that weren't as fast as they could be. The ceiling is pretty high.”

Lake Oswego also could tweak the relay lineup, potentially adding junior Lauren DeGroot, who has the team's second-best time in the 100.

“Our depth is so good in the sprints, it's a matter of finding what fits them the best,” Kinney said.

Cascade junior Emma Gates, the 4A high jump champion as a freshman, got her season off to a strong start by clearing a personal-best 5 feet, 10 inches in a meet against Sweet Home on Friday.

The mark ties her for sixth all-time in the state with Estacada's Chancey Summers (2011) and Crescent Valley's Jan Martin (1978). West Albany's Rachel Proteau set the state record of 6-1 in 2013.

Oregon City junior Harley Daniel is leading the state in both hurdles races and the long jump.