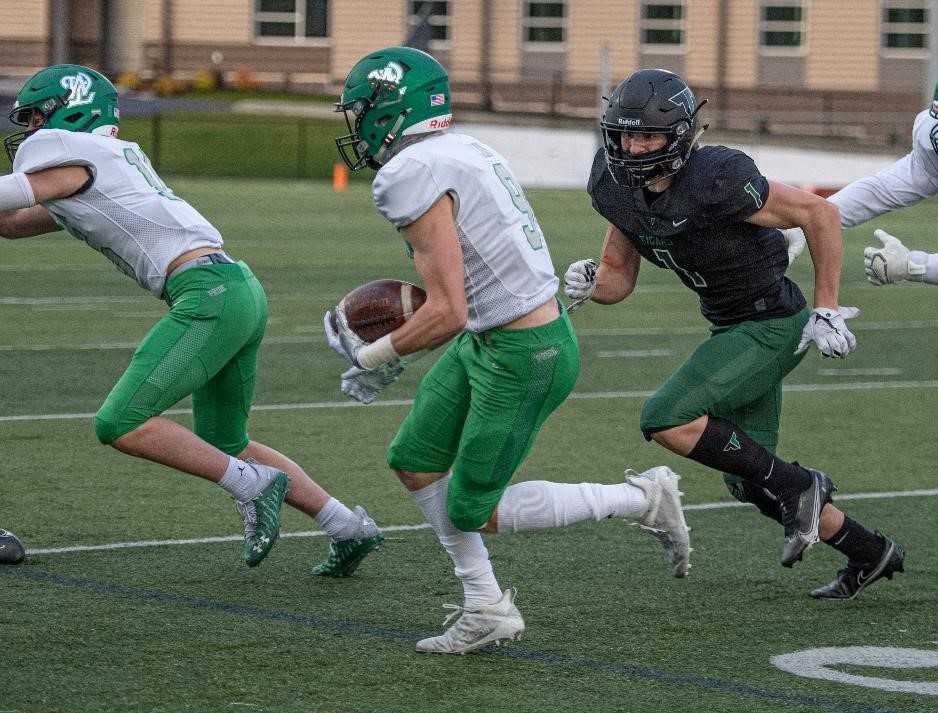 TIGARD – West Linn will never know if this football season would played out with a state championship.

But the Lions, regarded by some as the top team in 6A, still have some things they would like to accomplish along the way, and they marked a big one off their checklist Friday night.

After going 0-4 against the Tigers in the last three seasons, including a quarterfinal defeat in 2017, the senior-led Lions savored getting another crack at their nemesis.

“The whole week we were like, 'We haven't beaten these guys in a long time, and this is the year that we're going to get it done,'” said Masters, who also had an interception.

Added Haines: “This year we were coming out with revenge. We wanted to come out and get this win real bad. It felt really good.”

West Linn improved to 3-0 as the abbreviated season reached its midway point. After losing in the state quarterfinals in 2019, the Lions had high hopes for this season, but just as it is getting started, it seems the end is fast approaching.

“It's just tough because we have a really close senior team this year,” Haines said. “We were really hoping we could get a chance at a state championship. But at least in these six games we got, we're just going to try to do everything we can to make the most of them. We want to come out with all these wins so we can feel like we at least had a pretty good senior year.”

The Lions aren't about to waste any opportunities.

“This is kind of our last hurrah, to come together and win all of our games,” Masters said. “This is the team we've been playing with since we were in fifth, sixth grade. We had 15 months of offseason work together, and we had plenty of time to get dialed in. We're just rolling now.”

Tigard (1-1) put up a respectable fight against the Lions. But the Tigers, who lost starters at 19 of 22 positions from a quarterfinal team, simply couldn't handle the bigger, more athletic, more experienced Lions.

“They're a very good team,” Tigard coach John Kemper said. “They're much older than we are. We're really green. We've got young guys all over the place. We battled, and we had our chances.”

West Linn drove 60 yards in 12 plays on the game's first series to take a 7-0 lead on a four-yard run by Haines. Tigard needed one play to answer as senior Hewitt Sullivan busted loose for a 74-yard touchdown run, making it 7-6.

It was the first points allowed this season by West Linn's starting defense.

“It definitely wasn't what we wanted to start off the game with, but we kind of rallied like, we're going to be all right,” Masters said. “It was just one touchdown. It was going to happen eventually. So we were ready to bounce back from it.”

On the Lions' next play, DeBisschop hit a wide-open Masters for a 63-yard touchdown pass. In the second quarter, DeBisschop and Masters connected for a 31-yard score as the lead grew to 21-6.

Tigard got a 33-yard field goal from sophomore Henry Masters with 3.8 seconds left in the first half to cut the lead to 21-9, but with a chance to get back in the game in the third quarter, the Tigers were unable to get a first down on their first two series.

West Linn made it 28-9 midway through the third quarter when Haines shook off a tackler near the line of scrimmage and weaved through the defense for a 45-yard touchdown run.

“We talked about BYOB – be your own blocker,” West Linn coach Chris Miller said of the second score by Haines, who has eight touchdown runs this season. “He just banged off a guy and took it to the house.”

Tigard pulled within 28-15 in the fourth quarter when junior receiver Keenan Speer-Johnson turned an inside screen into an 18-yard touchdown pass from senior Zach Chesler. Two plays later, though, West Linn made it 35-15 on an 80-yard pass from DeBisschop to sophomore Mark Hamper.

Chesler went 13 of 23 for 113 yards and one touchdown with one interception. He was under heavy pressure as West Linn got sacks from senior Kaanan Huffman, junior Zeke Viuhkola and sophomores Karl Ingle and Hamper.

Sullivan, coming off a 229-yard, four-touchdown performance in a season-opening win over Oregon City, had 95 yards on nine carries before leaving in the second quarter after absorbing a hard hit. Sophomore Konner Grant filled in and finished with 65 yards on 15 carries.

West Linn's defensive front dominated throughout, repeatedly pinning the Tigers behind the line of scrimmage. Haines flew in from his linebacker spot and had three tackles for loss.

“Our D-ends are quick, and we're shooting backers in there,” Miller said. “They do a lot of pulling in their schemes, so you do leave gaps from time to time, and some of their kids took some heck-acious hits tonight.”

The way the Lions are playing on both sides of the ball, they are making a good argument as the class of 6A.

“I think we're the best team in the state when we play well,” said Masters, who has four touchdown catches this season. “When we're flowing, I think no one can beat us.”