Boys basketball: No. 1 Churchill slams door on No. 2 Crater
Tweet
Lancers hold Comets to season-low point total in a 61-48 road win that clinches at least a share of 5A Midwestern League title
February 25, 2020 by Jerry Ulmer, OSAAtoday 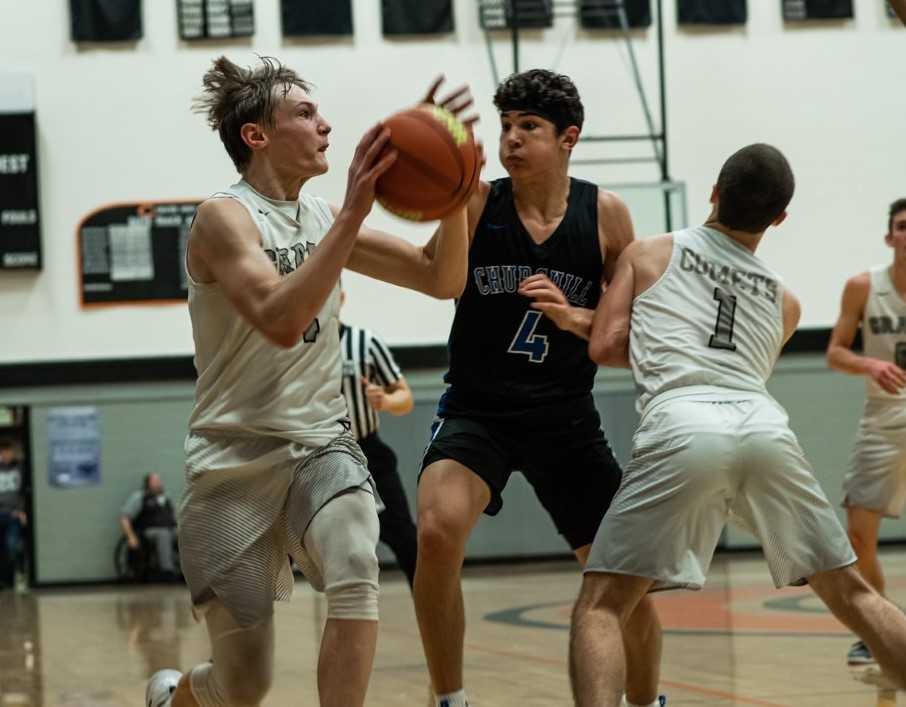 With the 5A boys basketball playoffs looming, No. 1 Churchill passed one of its biggest tests of the season Tuesday night.

The Lancers went on the road for a convincing 61-48 win at No. 2 Crater, padding their lead over the second-place Comets in the Midwestern League. Churchill (20-3, 14-0) clinched at least a share of the league title and can win it outright by beating either North Bend or Thurston in its remaining two games.

The Lancers scored the last nine points of the first half to open a 25-15 lead and were in command the rest of the way, extending their Midwestern winning streak to 33.

Churchill won both league games over Crater (17-6, 13-2) after falling to the Comets in the Les Schwab Invitational in December. Crater was eager to get payback for a 69-65 overtime loss at Churchill on Jan. 21, but the Lancers responded in the supercharged atmosphere.

The 48 points was a season-low for Crater, which entered averaging 69.3 points.

“Great environment, totally packed house, and I thought we played solid and smart and were gritty on defense,” Churchill coach Kelly Bokn said. “I'm just really happy to get out of Crater with a win.”

Crater was within 16-15 in the second quarter after a three-pointer by 6-foot-11 junior Nate Bittle, who led the Comets with 22 points, six rebounds, three assists and seven blocks. But Pia hit a three-pointer as the Lancers reeled off the next 11 points, the final two on a driving basket by Pia that made it 27-15 early in the third quarter.

Churchill had success on offense by drawing Bittle away from the basket and converting on back-cuts. Bokn said the Lancers were wary of the shot-blocking of Bittle and 6-6 senior Kruger Edwards.

“They're great rim protectors, so you've got to move the ball and try to pull them out to a side,” Bokn said. “If you go at them, that ball is coming back at you. So we did a good job of neutralizing that.”

Crater coach Chris Schmerbach said the Comets struggled to communicate and execute their defensive game plan against the multidimensional Lancers.

“They have counters for everything,” Schmerbach said. “We wanted to try to take away the three from them because they can get it going in a hurry. You've got to give something up, and that ended up being the thing.”

Wallace, who scored all 12 of his points in the second half, scored on a steal and a three-pointer as the lead grew to 41-24 after three quarters. The Lancers had given up big leads in the second half of wins over 6A contenders Barlow and Lake Oswego this season but closed out the Comets without incident.

“We've got a bunch of seniors on this team, and at some point you've got to mature and be able to handle that pressure, and still be aggressive and take open looks.” Bokn said. “When you're on the road, you've got to be able to do that.”

Bittle made 9 of 15 shots, including 4 of 10 three-point attempts, but the rest of the Comets had difficulty finding a rhythm against Churchill's aggressive defense. Junior guards Braydon Ray and Hunter Chubb added eight and seven points, respectively.

“They took some things away from us,” Schmerbach said. “We just kind of got a little frustrated. When they're playing defense like that, you've got to work a little harder. … If our auxiliary guys aren't scoring, Nate's got to be really special. He was good tonight, but he wasn't like he was the first time we played them.”

The Lancers, last year's 5A runners-up, ensured their seventh league title in eight seasons. Schmerbach called Churchill “one of the best high school teams I've ever coached against,” but believes his team also has what it takes to make a deep postseason run.

“We didn't get the league title, which is one of our goals, but the big goals are still in front of us,” Schmerbach said. “Our guys are hungry, so we'll get back to work, and hopefully we can meet up with them again somewhere.”