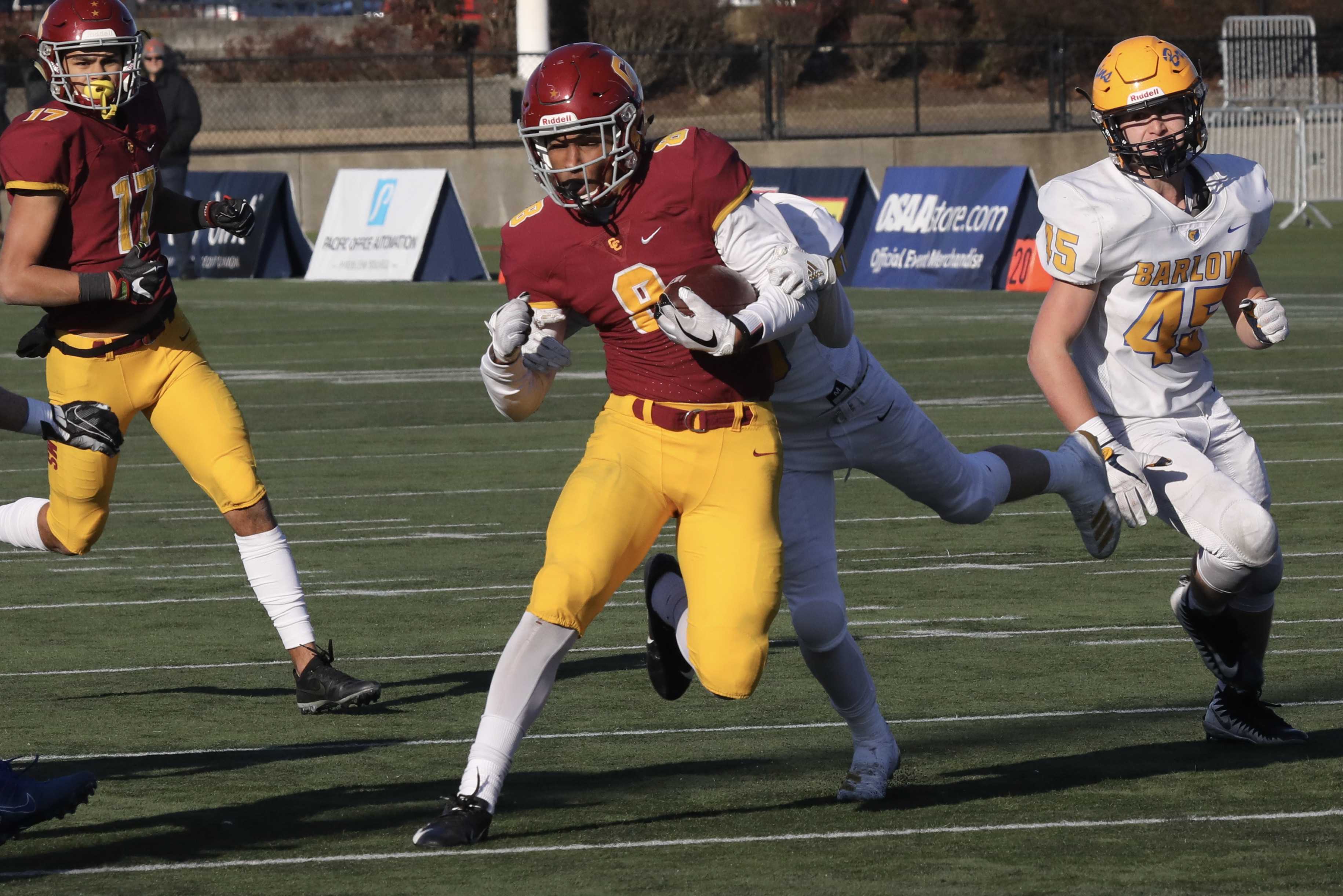 Central Catholic's Silas Starr cruises through Barlow's defense with a 25-yard passs from Cade Knighton to set up a touchdown.

HILLSBORO — Central Catholic leaned hard on its defense for 24 minutes Friday afternoon, then leaned hard into Barlow for the other 24 and cruised into the 6A football final with a 35-7 victory over the Bruins at Hillsboro Stadium.

The fourth-seeded Rams (11-2), whose offense can hit a team from about eight different directions on any given snap, haven’t needed as much help from their defense as they did against the Bruins. They have scored early and often all year, so the defense hasn’t been obvious.

Against the Bruins, defense wasn’t just obvious, it was absolutely necessary. Central's offense sputtered often in the first half.

Like this: Barlow (10-3) stopped the Rams in the red zone three times — twice inside the five — in the first half and kept itself in the game. A dramatic blocked field goal scoop-and-score by Miles Jackson early in the second period and its only legitimate drive gave Central a 13-0 halftime lead. But Barlow was still in the game.

Then the second half started. And the Rams rolled. Running back Elijah Elliott ran for three touchdowns — all after the break and most of his 151 yards. That included a 77-yarder in the fourth quarter that broke Barlow’s last remaining vertebra.

“We were just not executing in the first half,” Elliott said. “They were doing a pretty good job getting into the gaps, but we just weren’t executing.”

Rams coach Steve Pyne was a little more concerned than that.

Barlow’s game plan going in was to keep the ball away from the Rams’ potent arsenal of skill players by controlling the ground game — and thus, the clock.

The Bruins are good at it. They have a big, mobile line, a tough running back in Nick Collins and a quarterback who can run in Jaren Hunter.

Between the two of them, they ate up most of the first quarter. The Bruin defense stopped the Rams’ opening drive on the Barlow 2, then Collins and Hunter took it right at Central.

The Bruins drove all the way down to the Central 6-yard line while the clock whirled away, then stalled on a bad snap and a false start. So they sent Derek Fortanell out for a 29-yard field goal.

The spot was good and Barlow’s timing was just right. But so was Central’s Kimo Hiu, who knifed in from the edge and got a hand on the kick.

The ball bounced right in front of Jackson, who picked it up at the 20 and headed the other way all by himself.

“That’s something we practice,” Jackson said. “Kimo blitzes from the side. I’m just the scoop and score guy. I’m supposed to pick up the block and take it to the house.

“At first, I thought maybe there would be a whistle. But I figured that I’d just keep running and until I heard one. I didn’t.”

And in that one dramatic play, with 9:52 left in the second quarter, Barlow’s game plan went up in flames.

“That was the huge momentum changer,” Pyne said. “Barlow was just going down the field — chunk, chunk, chunk — and taking nine minutes off the clock.

“After we got that score, we were able to relax a little bit.”

Two drives later, the Rams cobbled 69-yard drive together and cranked the lead up another touchdown on a seven-yard pass from Cade Knighton to Jackson.

Barlow was essentially done right there, but just to make sure the Rams re-established their running game and turned the game into a rout in the second half. Elliott got two seven-yard touchdown runs in the third quarter — one set up by a Kalvin Souders’ interception of a Hunter pass, then broke for his big one in the last period.

“That’s kind of how we work,” Elliott said. “We just pound ‘em and pound ‘em — old school football, kind of. But we have some amazing receivers who can really catch the rock, too. When we get both working together, it’s all good.”

But the defense made it all possible, mainly by subtracting the run from Barlow’s playbook. Without the 91 yards the Bruins picked up just 56 yards on the ground. Hunter got his licks in through the air — 274 yards — but with the exception of one spectacular escape job and touchdown pass to Drake Payne when the game was well out of reach.