Football: For Gold Beach, a victory in a winless season
Tweet
The 2A Panthers, state champions in 2007 and 2011, are among the many schools in Oregon who are struggling with low turnout
November 4, 2019 by Jerry Ulmer, OSAAtoday 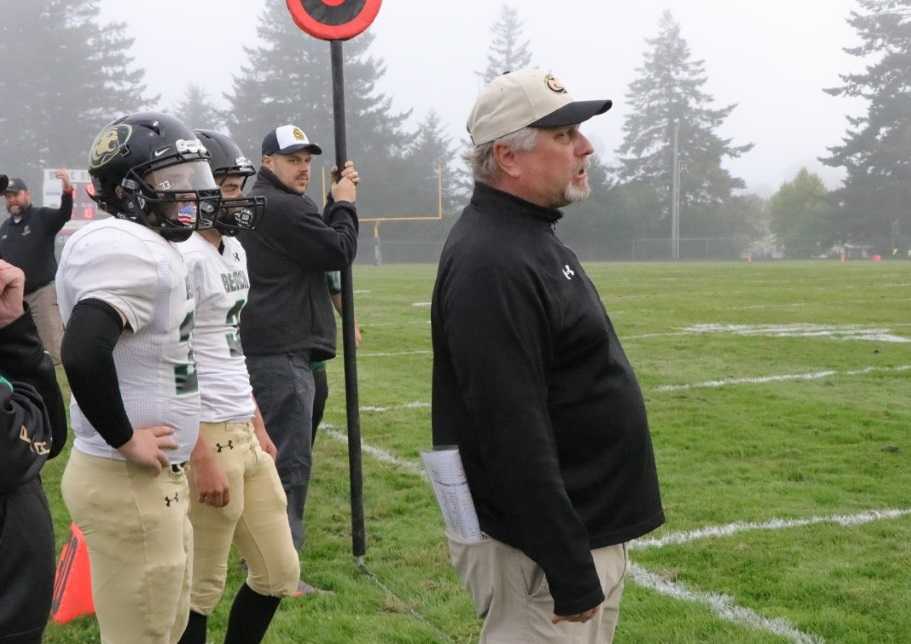 It wasn’t long ago that Gold Beach was an idyllic example of small-town high school football in Oregon.

Not only were the Panthers perennial state contenders, but the school was host to a summer football camp that became a go-to destination for teams on the West Coast. The sport was weaved into the town’s fabric.

Two weeks before this season started, though, Gold Beach wasn’t sure if it could field an 11-man team to play its 2A schedule. It took an 11th-hour influx of players for the school to decide to suit up for 2019.

So Friday night, when the Panthers lost to Bandon 59-6 to finish a winless season, it was a different kind of victory for Gold Beach.

“What made the team work this year was some pretty crazy and courageous kids,” said coach Kevin Swift, who has led the Panthers to five state title games, winning championships in 2007 and 2011. “I told the kids, ‘Look, this is about honoring a commitment to a league, this is about being a man, this is about showing up and dealing with adversity.’”

Of the many schools dealing with low-turnout issues in Oregon this year, Gold Beach is among the most surprising. As recently as 2017, Gold Beach won the Sunset Conference with about 30 players in the program.

Last year, the team finished 1-7 as turnout dropped into the mid-20s. This year, alarm bells went off when only three or four players showed up for summer workouts. By the middle of August, the number had barely reached double figures. Swift could see the situation was dire.

Just before he was ready to pull the plug, though, the number surged to 20. Swift immediately walked over to a school board meeting to tell superintendent Tim Wilson that yes, Gold Beach would play football in 2019.

When Swift, 60, arrived at Gold Beach from Southern California in the 1990s, the school had nearly 300 students. That number has dropped to about 135 as the town’s demographics have dramatically shifted.

“We are basically a California retirement community now,” Swift said. “We always had teams in the 40s, in large part because we still had a middle class. Athletics in this country are truly a middle-class value.”

Swift compared Gold Beach’s challenges with other rural programs in the state.

“Agricultural communities seem to be hanging on a bit better than logging and commercial fishing communities,” Swift said. “Gold Beach is stunningly beautiful – it’s one of the things that attracted my family 22 years ago – but there’s a wage and housing shortage.”

The Panther program took a hit when the Gold Beach Football Camp was cancelled after 2014. During its 21-year run, it regularly attracted more than 20 big-school and small-school programs from Oregon, Washington, California and Idaho.

The camp, foundational to Gold Beach’s success, was discontinued for a variety of reasons, among them California changing its rules for offseason contact and teams seeking camps with better facilities.

Swift, the school’s athletic director, turned the program over to assistant coach Justin Storns in 2014. That year, Gold Beach finished 10-1 and reached the 2A quarterfinals. The Panthers went 0-9, 6-4 and 6-3 the next three seasons before Swift retook the reins from Storns, who was an off-campus coach.

“I came back knowing that I wouldn’t be coming back to the same culture and program,” Swift said. “I was coming back just to keep football alive in Gold Beach.”

To make it through this season, Swift played five freshmen, including a two-way starter. With an 18-man roster, having productive practices was difficult. And Swift had to curtail his often gruff coaching persona.

“The coaches kind of chuckled because you can’t really chew on a kid and chase a kid away,” Swift said. “I’ve got a young staff that knows all about my history and tradition, and they kind of said, ‘Let’s stop the old man from having a heart attack. Let’s just have fun, Coach.’”

Swift said that for being “an extremely proud man,” the season was “a bitter pill to swallow.”

“I wouldn’t wish it on my worst enemy,” he said. “I told the kids that I apologize for them not having the success. At my age, I don’t need to win for me, I want those kids to win for them. That’s the thing that tugs at your heart the most.”

The challenge is likely to continue next year for Gold Beach, which graduates eight players and has six eighth-graders who play football. The coaches will try to recruit more players from the student body, but it will be a chore considering only about one-third of the boys participate in extracurricular activities.

For Swift, it’s getting hard to ignore how modern forces are affecting high school athletics.

“The worst thing to be in America is a history teacher/football coach,” he said, “because I think we all understand the pressure of how our ever-changing culture and demographics, all that, are impacting the game. I think we’re looking at a perfect storm in high school athletics. Everybody knows it’s not safe.”

“Culture takes a long time to put in place. It’s amazing how fast it can go away,” Swift said. “I mean, holy cow, in the blink of an eye.”