Boys basketball: Southridge coach Vesel to take sabbatical
Tweet
After 13 years in the program, Phil Vesel will step away for the 2019-20 season, handing the keys to assistant Scott Entinger
June 22, 2019 by Kyle Pinnell, OSAAtoday 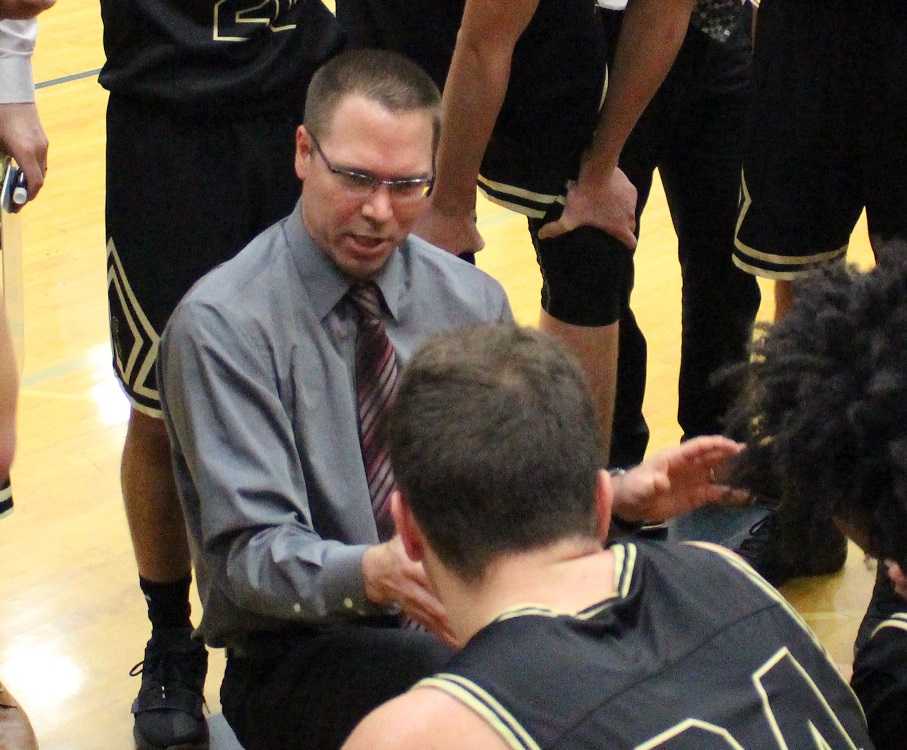 Phil Vesel took Southridge to the second round of the 6A playoffs for seven consecutive seasons.

For the past 13 years, Southridge boys basketball coach Phil Vesel has been pacing up and down the sidelines at every Skyhawk basketball game.

In that time, he has been in the second round of the 6A playoffs for seven consecutive seasons, won a Metro League championship for the first time in program history and taken his team to two fourth-place finishes in the state tournament.

Next season, Vesel will take a break.

Vesel has decided to take a one-year sabbatical from coaching. Scott Entinger, an assistant in the program for the past decade, will take the reins as the interim head coach.

Vesel has thought about the decision since last season ended. Near the end of the school year. he brought up the idea to athletic director Trisha Shoemaker, and he asked Entinger about filling the position a week ago.

One of the factors that played a role in Vesel’s decision was when the boundaries switched a few years ago due to the introduction of nearby Mountainside. Next season, the Mavericks will have more than five players that have developed through the Southridge Junior Metro program.

“It’s been difficult,” Vesel said. “I think there are more kids currently at Mountainside that grew up in my youth program then there is on the varsity team at Southridge. It definitely has played a role. It wasn’t a deciding factor, but it was a part of the decision.”

The coach said that the biggest factor in his decision, though, is that he would like to spend more time with his family.

Vesel said the support from the administration helped him feel more comfortable making the decision. He is grateful for the opportunity to step away for a season without completely walking away.

“When I first spoke to them I was emotional,” Vesel said. “I’ve really poured my heart and soul into the Southridge program and youth program. We’ve been consistently one of the top teams. So to think about giving that up and getting away from it, that was a lot for me, and to have an administration that says, ‘What you need is some time to think about this and recharge,’ so that made it easier and I’m very grateful for that opportunity.”

Vesel says that he will not micromanage Entinger or give him any notes. He trusts him with the program and is excited to see what he has to bring. One of the reasons that Entiger was such a strong candidate for the position was because of the relationships that he has built over time with some of the players.

“Frankly, when I coach it’s to develop relationships,” Entinger said. “I think being a JV coach, sometimes you have kids for a couple of years, and you certainly can build lasting relationships that way. But I also think you can do it relatively quickly, too. No matter what level, just being able to know the kids the way that I do, I think that hopefully lends itself to the possibility of some success.”

Despite taking the year to step back, Vesel will still be involved with the program. He says that he is focused on redeveloping the youth program, which he calls the lifeblood of the program. He also plans on coaching his son’s team for another season.

Next year there will be a bit of a shakeup, but it will also be exciting, Shoemaker says. While Vesel won’t be on the sidelines, Entinger will get his opportunity to manage the varsity.

“What we know is that coaches put a lot of time into their teams,” Shoemaker said. “Maybe this is not something that would be horrible to step away and reevaluate whether they want a break without having to totally quit. We want to give coach Vesel the time he needs with his family.”

Added Vesel: “My plan is to be back, but honestly, I need some time to step back away from it and have a different lens.”